The American dysfunctional family was the theme of New City Stage Company’s successful 2012/13 season, and it would be hard to find a play which fit the theme more than the concluding entry, Adam Rapp’s dark and funny AMERICAN SLIGO. 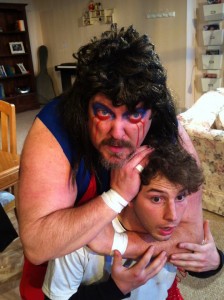 Bobby Bibby (Jordan B. Mottram) has won the dubious prize of a meal with Artie “Crazy Train” Sligo (John Jezior) and his family before Crazy Train’s final professional wrestling bout. Young Bobby provides the audience with an outsider’s look at the strained relations and troubled characters in the home.

The central character might be the absent mother, represented by an empty seat on which Artie places a lighted candle. Her death from cancer has left the family in disarray. Artie broods with quiet anger. Son Kyle (Sam Sherburne) seeks refuge online and in the love of his underage girlfriend (Francesca Piccioni). Crazy Aunt Bobbie (Suzanne Sulby) is pumped full of antidepressants, and brings an overbearing enthusiasm to circumstances which it barely fits. (“If she gets on your nerves tell to back off,” Kyle tells Bobby.)

The New City production began tentatively, but as they settled in to the opening night show, each (exceedingly well-cast) actor shone. Jezior makes a welcome return to the Philadelphia stage after an extended absence, conveying Artie’s anger and strength with remarkable emotional control.

But the play, and the surrounding performances, kick into another gear with the arrival at the dinner table of prodigal son Victor (the masterfully intense Allen Radway).

Victor is the most profoundly affected by his mother’s passing, acting out with violence to himself and those around him. Newly released from jail after a destructive DUI, he’s sold his a playstation belonging to the son of his girlfriend (Ginger Dayle) for cocaine. One by one, he pushes away those around him, until he’s left alone onstage.

But just as AMERICAN SLIGO seems set to end with a satisfyingly unresolved dissipation, the uniquely structured work enters an extended, and equally satisfying, denouement.

It doesn’t effect the high quality of the play or production, but Rapp’s treatment of professional wrestling (“We might as well be ballerina’s in tutus”) lacks insight or truth, and serves only to move his plot and metaphors. Does anyone in 2007 (when the play is set) really believe that the events onstage are real? I live downstairs from a professional wrestler (and teacher of the art in a local school), and with brief interaction gained a respect for his vigorous training and attention to choreography and story. Wrestling is an American artform, and a more attentive work might explore it as such.

But if this treatment was disappointing, AMERICAN SLIGO is not. Director Aaron Cromie creates a slideshow of beautifully staged moments, not least the brilliantly chilling conclusion. May 30 to June 23, 2013. newcitystage.org.

One Reply to “AMERICAN SLIGO (New City): Wrestling with dysfunction”