Philadelphia is in for a musical treat: HILDEGARD VON BINGEN: BAMBINA MISTICA (the mystical child), an Italian cantata, with music by Italian composer Mariano Garau and Hildegard von Bingen; a libretto by Philadelphia’s Karen Lauria Saillant, director of International Opera Theater, based on original writings of Hildegard; and presented by ten Philadelphia sopranos, accompanied by a harp (Mary Tresvalles). The American premiere takes place November 8, 2015, at 3 pm at Our Lady of Angels Chapel at the convent of The Sisters of Saint Francis of Assisi in Philadelphia, in Aston, PA. Admission is free; contact (610) 459-4125..

The cantata presents the sensitivity and courage of a young girl named Hildegard, 10th child of a wealthy medieval family, born in 1098, who would grow up to become a world famous Benedictine abbess at Bingen, writer, composer, painter, philosopher, Christian mystic, visionary, creator of her own language, and a polymath who is considered to be the founder of scientific natural history in Germany.

Given the overall misogyny and repression of women during the Middle Ages, Hildegard’s often outspoken criticism of ecclesiastical and political corruption made her some enemies; yet, she was a sought after advisor to Kings and Popes—an unprecedented accomplishment for a 12th century woman. Given the short life span for most people in the Middle Ages, she lived a long life (till 1179), leaving a legacy that still stuns people today. 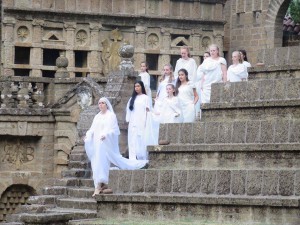 The journey to Assisi to create the world premiere Italian cantata began early in 2015 in Philadelphia, when more than 75 young sopranos from the Philadelphia area applied to International Opera Theater to sing a role in this premiere. The ten girls selected would go to Santa Maria degli Angeli Basilica in Assisi, Italy, where they would perform the world premiere of HILDEGARD VON BINGEN: BAMBINA MISTICA (see the trailer) as part of the Assisi Suono Sacro Festival with a professional Italian soprano portraying Hildegard as an adult—right in front of the Proziuncola, the cell where Saint Francis died.

This beautiful and thought provoking cantata is now premiering in the US at another sacred place: Our Lady of Angels Chapel in the convent of The Sisters of Saint Francis of Assisi of Philadelphia as part of the Global Philadelphia 2015 celebration this Sunday, November 8 at 3 pm. The original singer just flew into Philadelphia to play Hildegard von Bingen as the Abbess.

[Our Lady of Angels Chapel at the convent of The Sisters of Saint Francis of Assisi in Philadelphia, 609 S. Convent Road, Aston, PA] November 8, 2015.

One Reply to “From Assisi to Philadelphia: U.S. premiere of Italian cantata celebrating the extraordinary life of Hildegard von Bingen”