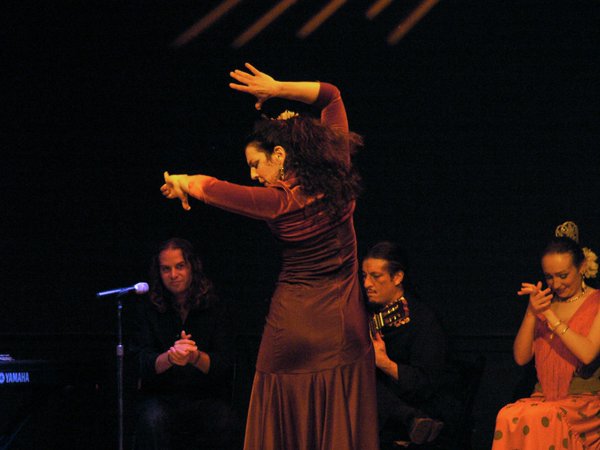 The first time I experienced a flamenco tablao, I was 17, alone in Europe for the first time, and marginally in love with my new German flat mate. Of course the night was transcendental. My flamenco teacher Felipe stole the show, which took place on a tiny stage in a tiny Andalucian café off a tiny street and I knew, even then, that I’d never be able to find it again because this was something authentic—something that regular tourists would never get to see.

Fast forward nearly a decade and a half and I’m sitting at the Asian Arts Initiative with two friends, one who is a tap dancer like me, with a few introductory flamenco classes under her belt, and one who has never seen anything like this before. The fact that we’re all equally impressed, even me and my self righteous I’ve-been-to-Sevilla pedigree, is a testament to the almost universal appeal of this percussive dance form and, more importantly, to the work of Pasión y Arte Executive and Artistic Director Elba Hevia y Vaca.

She explains to the packed house that flamenco tablaos, which gained popularity in the 18th and 19th centuries, can be compared to today’s jazz clubs or poetry cafes. There’s the element of performance yes, but it’s interactive, with the dancers and musicians feeding off of the audience just as much as the audience is feeding off of them. There’s also food—wine and tapas in this case— making Tablao Philly a great date night, even for folks who don’t usually attend dance concerts.

Hevia y Vaca plans to repeat the improvisatory performance series on a quarterly basis, featuring local dancers and a rotating roster of guest artists each time. This weekend’s tablao included Philadelphia’s own Pasion y Arte, in addition to the New York/Philly based De Luna a Lunares, and guest artist La Meira. The evening was divided into 3 sets, with short breaks in between for, as Hevia y Vaca instructed the crowd, “more wine.” 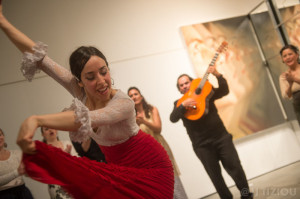 Guitarist and cantor (singer) Cristian Puig set the tone, immediately transporting the audience into a different time in place. Dressed in fierce reds and blacks, dancers Monica Herrera, Marilla Quevedo, and Griselda Marin could be heard by the clicks of their heels before they could be seen. Their faces were steel, their port de bras liquid, and their intentionally off kilter turns oh-so-nonchalant, perfectly embodying the tension and juxtaposition of vastly different dynamics that makes flamenco great.

Cantors Barbara Martinez and Hector Jose Marquez, guitarist Andreas Arnold and dancers Kumiko Koide, Amelia Hernandez, Alexa Miton did Philly proud in the second set with their mastery of polyrhythms and counterpoints. And although the evening could have been a programming disaster, with one solo after another, each dancer imbued her performance with a unique style: sometimes sensual, sometimes humorous, and sometimes all three, as in the case of guest artist La Meira.

With credits including Carnegie Hall and Jacob’s Pillow, it was no surprise that she brought the audience to their feet. One of things that has always intrigued me the most about flamenco is its fluid aesthetic: you don’t have to be young and thin and able to perform a quadruple pirouette or hike your leg above your head to be good—in fact, sometimes it’s better if you’re not. And even though the performance ran late, La Meira held court like a queen, circling the stage and enchanting the entire audience, whether they knew anything about flamenco or not. [Asian Arts Initiative, 1219 Vine Street] October 29-31, 2015; pasionyarteflamenco.org.