Arden Theatre Company’s production of METAMORPHOSES, an evening of coherent theatrical vignettes based on the Myths of Ovid, opens tonight. At a recent preview, audiences were treated to a finely acted series of stories by translator/literary adapter Mary Zimmerman. But the star of the show was the famous pool, which sits center stage, welcoming and enlivening the action in the tales.

This photo essay, taken by and with comments by Arden technical director Glenn Perlman, looks at the design and creation of the aquatic set. [Arden Theatre, 40 N. 2nd Street] October 1-November 1, 2015; ardentheatre.org.

Learning that we were to produce Metamorphoses must be a little like expectant parents learning they’re going to have twins: you knew it was going to be hard, but it just got a whole lot harder. Fortunately, we were as prepared as possible. Courtney Riggar, our production manager, had worked on a prior production at Hartford Stage. The technicians that created the original and subsequent productions had created a “pool bible:” a document with many important details about the design and construction of the pool and equipment. Our director, Doug Hara, had been in several productions, including the original and the Tony-nominated Broadway run.

But the single biggest resource we had was time. We reserved the Haas stage for the entire summer for the build. Master Carpenter Justin Romeo and I had what seemed like all the time in the world to create this tricky little set. We started right after Independence Day; first moving the seats into our thrust configuration, and then we started building the pool, working from detailed designs by set designer Brian Sydney Bembridge. 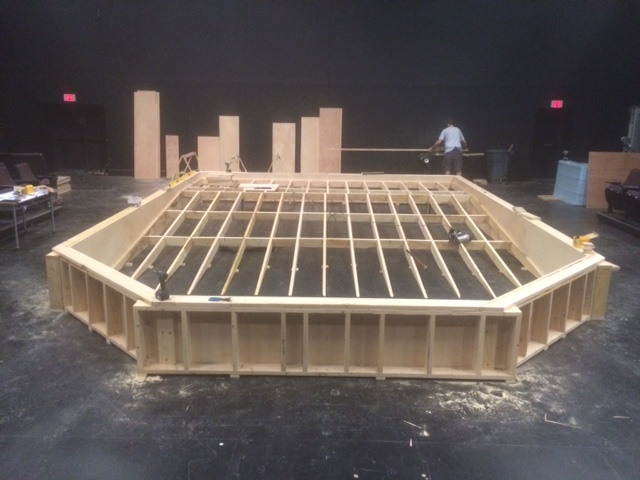 Scenery is usually pretty light weight, but this thing is beefy — 2×6 framing on 16″ centers, double top-plate and covered in 3/4″ plywood. I had done my homework:  calculating water volume (2600 gallons) and weight (around 10 tons), figuring the load per square foot on the stage floor (54 lbs/sq ft.) and engineered a construction method robust enough to contain the water.  The sidewalls are braced every four feet to prevent collapse. The entire bottom and sides are also covered in 1″ thick blue styrofoam, for heat insulation and actor comfort on their feet, and then the thick black rubber pond liner, which is in one giant seemless piece. 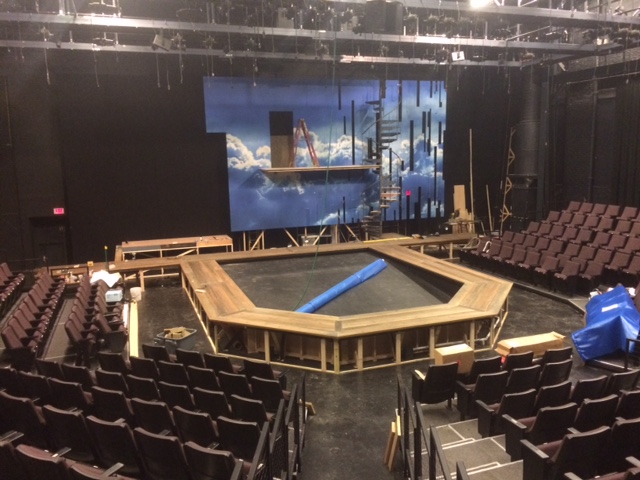 Installing the liner was like gift-wrapping a present, but opposite — like trying to neatly wrap the inside of a box. But the pool isn’t just a rectangular box: the top (upstage) is the shallow end:  just 2″ of water. Through the middle of the stage the bottom slopes down and then downstage there’s the deep end, at 22″. The downstage corners also have 45° angles. We roughed it in then started adding water to help push the liner into the corners as we worked it out smooth and flat. 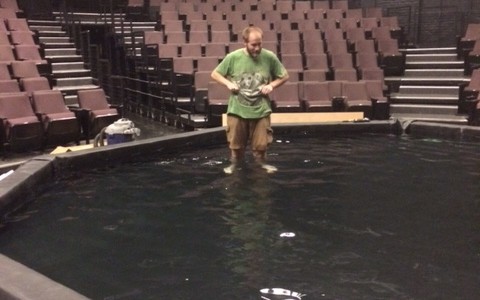 This was our first fill up, and it took about 7 hours running a hose from the nearest utility sink backstage. It worked, and it held the water, but you wouldn’t want to swim in it yet. The water was cold and full of floating sawdust. So the next step was pool equipment and plumbing. 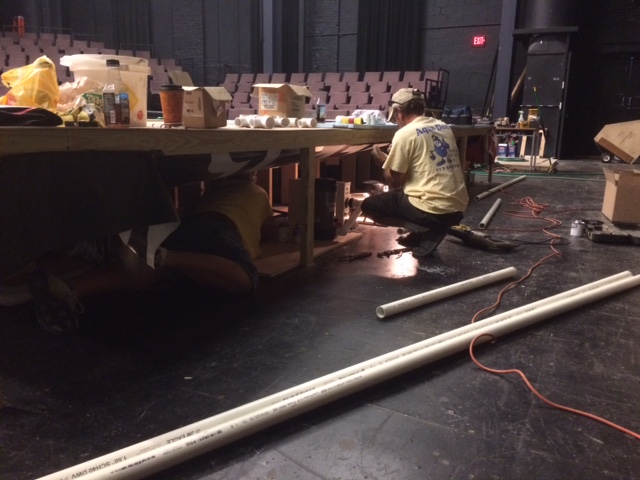 We had drained the pool after our initial pressure-test, and went to work. Using industry-specific equipment, we spent a magical day cutting the holes in the sides of the box for suction and return water, running all the pvc plumbing, and installing the pump, filter, two 11 kilowatt heaters, and automatic chlorinator. This is serious business.

It’s actually more like a hot tub, technically. We need the water temperature to be at 104° at the beginning of the show, when the audience enters, because that’s when we shut the pump off. This lets the water settle and be still and flat; which along with the black liner underneath and use of Thom Weaver’s beautiful lighting makes the pool like a mirror. Or infinite. Or both. But as soon as the heaters and pump go off, the water temperature starts falling. Actors spend 90 minutes in and out of the water, often in full costumes, so it needs to be warm.

Actor safety and comfort is always primary. They need to do this 9 times a week, after all. In fact, on both sides of the stage we built small, heated, insulated dressing rooms called “hot boxes” for them to retreat to after exiting the stage.

As soon as a performance ends, the pool gets cleaned of floating debris from the performance, covered with an insulating pool cover, and the pump and heaters get switched back on to bring it up to temperature for the next show. Pool chemical levels are monitored daily. And every two weeks we will completely drain, clean, and refill the pool.

In all, Justin and I worked on this set for about ten weeks. And there are four weeks of performances. It has been one of my most challenging yet rewarding sets ever, and I am really proud of how it turned out. And I personally think the show is beautiful and really worthwhile, so that’s nice too.

Glenn’s thoughts are taken from “How to build a pool onstage (or How I spent my summer vacation)“, from the Arden’s blog.