Republished by kind permission from WPMusings

Part of a series of previews of shows in the Fishtown Fringe segment of the 2015 Philadelphia Fringe Festival. 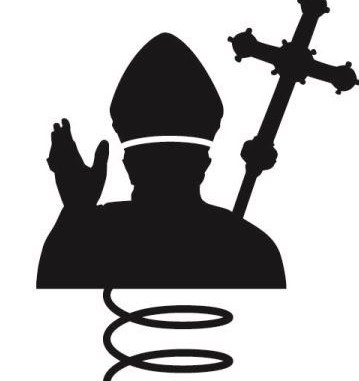 The Backstory: Philadelphians leaped into the Pope frenzy to make sure they could find a way to participate. Catholics were inspired, homeowners saw a way to earn quick bucks by renting out their homes, and artists…. How could they take part?

That’s when Charlie Abdo, one of the owners of Globe Dye Works and Catholic by birth, became inspired. Charlie loves to do edgy things and in his laid back way, sets the scene for grand happenings. Charlie has worked with Philadelphia Sculptors before, most recently in 2014 when we collaborated on the Destination Frankford Gallery, a pop up gallery that was part of the larger Destination Frankford project. So now Charlie had a vision – “Let’s have a ‘Pope Up” show,” he declared. “Pope Up” was born. Not a virgin birth, but not exactly traditionally inseminated either.

We love Globe Dye Works – a repurposed yarn dyeing factory that now is home to artists’ studios, creative industries, community groups, and for some reason, scrumptious desserts and heavenly coffee. Right – heavenly certainly plays a part. And the timing was providential – we could participate in the Fringe and also be there for the thousands of visitors coming to Philly for the Pope’s visit. But were there enough artists who shared our vision – heavenly or otherwise? We didn’t know, but we thought there would be. We sent out a call, and it was heard. We ended up with 26 artists who wanted to make sure the world could hear what they had to say. And as we hoped, there were lots of points of view. We had been a little nervous – what if people overstepped the bounds (whatever they were) and created art that was blasphemous, offensive, or inappropriate in ways we hadn’t yet imagined? We decided that if that happened, we would just reject any such submissions. But either artists with strongly negative views didn’t apply, or maybe this Pope just didn’t trigger the kind of anger associated with other aspects of the Catholic Church. But either way, our jurors, designer Mark Gallini and Public Art Consultant Marsha Moss, never had to confront the issue.

Some (artists’) viewpoints were clear – whether reverent like that of Patrick Cabry whose belief in Catholicism helped him find “the true form within” his carved marble Pope Francis. Or somewhat irreverent, like Holly Smith’s “Nun of Your Business,” a depiction of a scowling nun holding binoculars up to her eyes. Recognizing the positive changes in the Church, while acknowledging its culture of personal intrusion, she says,

poor and the environment, and is making a slow shift away from what people are

Nostalgia is here too – sort of. Rachel Citrino, a self-identified ex-Catholic, explains her inspiration for her photographs “Nope” and “Pope.” Referring to the colored smoke announcement when a pope is chosen, “ When it was black it meant that God had not yet chosen His representative on earth. I had no idea that there were chemicals added to the burning fire or campaigns and voting going on. I really thought something mystical was taking place.” From Pope Soap and Guiding Light Candles (on sale in our Pope Up Store) to serious investigations of Catholicism, we have something for everyone.