I’ve been a lover of the stage as long as I can remember. Mostly this love has been realized as a patron of local theaters. My father acted in community theater, and I had a scene onstage with him as his fictional son. In high school, I worked backstage on the light board and was rounded up for one dance number in my senior year production.

A couple short pieces I wrote were selected for a short play festival a few years ago. I helped out last year at a friend’s Fringe show. For most of my theater experience, though, I’ve been in the audience, a non-participant. 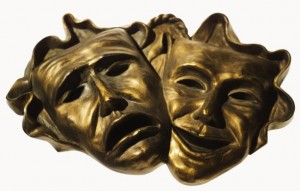 Still, the world of theater has always attracted me. When I first started to review plays, I thought, “Right, this is it, now I’m part of the world.” I soon realized that “theater people” don’t see it that way. Telling an actor or director that you are a “theater critic” is like telling them you like to kill puppies. It’s not a good idea if you want to continue a conversation.

This is a shame, because reviewers have much in common with the people they review. Both are huge theater fans, with a great knowledge of drama and an eagerness to talk about plays shared by few outside the industry. It’s not easy to create a play and to realize it on stage, but it’s also a craft to critique that play intelligently, to have confidence in your vision and opinion, and to offer meaningful analysis or sound recommendations.

Certainly, I have objections to some of the reviews I see published in Philly outlets. Generally that’s just because the reviewer did not share my judgment. At times though, criticisms can seem irrelevant or petty (a critic once complained about someone chewing gum a few rows away . . . mmnh). I have ideas about what is fair and not fair to write about a production, and those are not universally shared (or necessarily kept to by even your faithful correspondent). But I also know how hard it is to write analytical journalism under a deadline and for scant reimbursement. A tough review can kill a small play run, and that’s a shame, but the critic’s commitment is to the reader, not to the playwright or director.

Broad Street Review, a local online media outlet which publishes regular personal-essay theater reviews of mixed but generally good quality, has organized an interesting conversation on this subject, on Thursday, May 26, at the Franklin Inn Club. The panel discussion will feature Bernard Havard of the Walnut Street Theatre, Charles McMahon of Lantern Theater, and Seth Rozin of InterAct facing off against Broad Street Review’s critics Robert Zaller, Gresham Riley and Jim Rutter, with website editor Dan Rottenberg as moderator. It’s too bad the talk is set up as a us-v-them debate, but that’s too often how the relationship is viewed.

2 Replies to “Why’s Everyone Such a Critic?”