Republished with kind permission from the FringeArts Blog.

“I was fascinated by the way TV is made: the way you shoot out of sequence and how it actually feels more fake, even with real planes, for example, than being on a theater set.”

The Incredibly Dangerous Astonishing Lucrative and Potentially TRUE Adventures of Barry Seal comes to FringeArts May 14–16, 2015. It’s the newest theatrical creation from Thaddeus Phillips of Lucidity Suitcase Intercontinental. Thaddeus, whose been splitting time between homes in Bogotá, Colombia, and Philadelphia these past few years, was inspired by the TV show he has been acting in in Colombia about drug smuggling in the 1980s. In the TV show he plays Barry Seal, a pilot who was one of the most notorious drug smugglers in US history. He became fascinated with the process of making the show and the history of these characters. Barry Seal will be followed in September by ALIAS ELLIS MACKENZIE at the 2015 Fringe Festival.

FringeArts: Where did the idea for this show come from and why did you want to make it into a show? 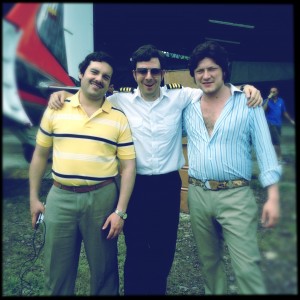 Thaddeus: I got this job, out of the blue, playing Ellis MacKenzie on MundoFox’s Alias El Mexicano, a Spanish language TV show about Rodrigo Gonzalez Gacha, one of Colombia’s most notorious drug kinpins. Ellis MacKenzie was the alias for Barry Seal, who is the USA’s most notorious drug smuggling pilot. Playing this role and being thrust into the crazy world of Colombian TV production is where the idea for these new projects came from. I was fascinated by the way TV is made: the way you shoot out of sequence and how it actually feels more fake, even with real planes, for example, than being on a theater set.

I loved seeing what the cameras were filming and imaging what the final shots would look like—and thought it could be really cool to stage a work as if it is being filmed for TV, but with the film crew as part of the staging, and a theatrical language could be developed by creating this world onstage and leaving it up to the audiences’ imagination what the show would look like. This was the initial idea: to take the aesthetics of a TV set and a TV filming schedule and apply it to the stage. The project idea was to make two shows, one small scale work that would give a history of the drug trade and the life of Barry Seal called The Incredibly Dangerous Astonishing Lucrative and Potentially TRUE Adventures of Barry Seal [coming to FringeArts May 14–16, 2015] and two, a large scale work with to be created in collaboration with Colombian actors who starred in the TV show I was on, called ALIAS ELLIS MACKENZIE [coming to the 2015 Fringe Festival].

FringeArts: How has the show developed from idea to production?

Thaddeus: As I developed the idea we began to research Barry Seal and then very soon we were dropped into the Grand Central Station of conspiracy theories spanning fifty years of US history. We also researched extensively the stories of Barry Seal relating to the drug dealers and the DEA and CIA.

FringeArts: Can you talk about some of your collaborators and what they are bringing to the work?

Thaddeus: For The Incredibly Dangerous Astonishing Lucrative and Potentially TRUE Adventures of Barry Seal I am working with Mario Cotto, a DJ from LA who is just extraordinary in his musical mind and his show on KCRW draws diverse fans across LA for it’s eclectic nature. He will be onstage DJ this show. Jeff Becker is a New Orleans based scenic designer who I met at the Prague Quadrinalle of set design. He works with large scale installation like structures that move and transform. We developed the set and the basis for The Incredibly Dangerous at his studio in New Orleans this Spring. Tataina Mallarino, who has worked with me many times, is co-writing and directing the piece. We are still in the midst of rehearsals and are creating something very unique that seeks to paint a picture of Barry Seal during his stay at the Salvation Army shelter on airline highway in Baton Rouge in 1986. The design is spectacular and the sounds are being sourced from many places including the top hits of 1985.

FringeArts: Will it be the same team for ALIAS ELLIS MACKENZIE?

Thaddeus: This same team will join the Colombian actors Juan Sebastian Calero, Victro Rodriguez, and Diana Calderon for ALIAS ELLIS MACKENZIE, that will open at the 2015 Fringe Arts Festival. Joining this group will be Ean Sheehy, the actor who played Edgar Allan Poe in RED-EYE to HAVRE de GRACE [Fringe Festival, 2013] to play CIA and DEA and FBI agents as well as Barry Seal’s co-pilot, Emile Camp. These really intense and daring actors who are afraid of nothing.

I am also working with five Philadelphia based Spanish speakers as the TV production crew, who so far are: Ama Bollinger, Chris Davis, and Paloma Irizarry. They will play a Greek chorus of a crew and will bring to the table their experience as generators and collaborators on devised projects that have become the benchmark of the Philadelphia theater scene. The core of ALIAS ELLIS MACKENZIE is being created in residence at Mapa Teatro in Bogota by improvising scenes we find most Narco Novelas miss and that tell our story in a surprising, and odd way. Tatiana Mallarino, who recently served as translator for the scripts of Netflix’s new show Narcos, is transforming those improvisations into TV scripts that will be used in the show. Jeff Becker has created a mad and lucid world filled with fast rolling flats and locations and a large looming camera crane straight out of an Orson Welles film set. Mario will be back in this work to score it live and cameo as Pablo Escobar.

FringeArts: What are some of the technical set pieces you are working on this time around?

Thaddeus: An almost complete Fleetwood Cadillac. It plays a major role. And the camera crane mentioned above and no video. All live suggested cinematic action. Pure theater magic.

FringeArts: What’s the most intriguing things you’ve learned about the drug smuggling trade?

Thaddeus: That the best most successful, richest, and biggest drug smuggler in the 1980s was the US Government.

FringeArts: Thanks Thaddeus, looking forward to the show!