I began to attend Philadelphia theater in earnest about a decade ago, in my early mid-twenties. Consistently, my companion and I would be the youngest people in an audience made up mostly of gray-haired, well-dressed white couples. Now in my mid-thirties, I feel less of a demographic anomaly, my increasingly salted salt-and-pepper hair blending into the aging crowd. But just as going to an indie rock show at the TLA can make me feel decidedly old, certain theater crowds still make me feel teenager-ly young.

Memorable cases of this included a show at the Walnut Street Theatre, during which several older audience members received (and took!) cell phone calls in the middle of the show, and I had to endure the distraction of several wives seated near me provided hearing-assisted recaps for their hard-of-hearing husband. But this fact was really brought home to me at a Lantern Theater Company performance of Vigil by Morris Panych.* 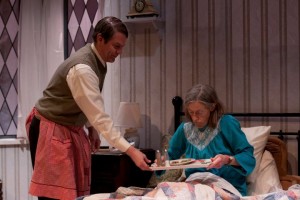 It wasn’t that the audience at the Lantern was particularly superannuated—several youngish couples were camped among the standard middle-aged theatergoers—it was that the dryly comic subject matter, which I found hilariously dark, fell flat to the older patrons around me.

Quickly paced with an abundance of droll one-liners (“Why are you putting on makeup? Why don’t you let the mortician do that?”), absurd monologues (on cross-dressing, religious guilt, and a disillusioned magician father), and even farcical slapstick, Vigil won its author Vancouver’s top award for best play. A British adaptation (the Lantern’s source, judging by the language and cultural references, but thankfully not any attempted accents) won critical acclaim at the Edinburgh Fringe. So it’s not as if the play didn’t have what it needed to be a success, and it was hard to see how the production, which featured Lenny Haas and Cael Phelan in spot-on performances, could have better served the material. Perhaps Vigil would be better received at Philadelphia’s own Fringe, where audiences are generally younger in age and more comically inclined. Because, unfortunately for the Lantern, much of the humor—laughter in the face of mortality—came at the expense of the old.

The audience’s reaction was mixed, with some people laughing and others sitting in unamused silence. Of course, humor is subjective, and what is a series of laughs to one person can be interminably unfunny to another. If you only read published reviews, you might assume there has never been a good production of a comedy in the city, so anti-humor is the criticism in town. Certainly, when a play is advertised as “darkly funny,” I often discover that means “not funny” (I thought the recent August: Osage County at the Arden was a good exception.) Perhaps I was just more sympathetic than most to Vigil’s wicked humor, but the timing and absence of others’ laughter makes me think it was a generational problem.

Last decade, my regular theater companion was a French live-in girlfriend, who criticized the age of Philadelphia play audiences with irritatingly justified Gallic arrogance, claiming that Parisian theaters offer five euro tickets to all buyers under 25-years-old. I’m sure hundreds of arts management theses have been written about this topic, and I suspect that that outreach efforts need to reach even younger viewers. (My own love of theater, piqued by annual holiday pantomimes, was cemented when I saw a performance of the Royal Shakespeare Company at the age of eleven.)

Theater audiences are generally upper middle-aged, running to elderly at the more established (read: expensive) theaters in town. (Though even many of the smaller theaters can be obnoxiously overpriced.) This would seem inauspicious for the future of the craft, but it could just be that social activities which seem fun in our twenties (loud rock shows, dance clubs, near-death drinking experiences) become unappetizing, while a nice night at the theater or opera seems more refined and appealing. Still (and I haven’t bothered to look up any statistics to back me up . . .  mmm, could I run for the Republican presidential nomination on that claim alone?), audiences in London, where I irregularly see plays, seem younger on average, as do audiences for independent local theater.

Whatever the causes or potential cures, the age of the local theatergoing crowd is sure to remain troubling high as long as the already old audiences reject fare that would appeal to younger-minded viewers, discouraging theaters from putting on such work in the first place. That was what was so worrying about being the most amused person in the Lantern’s surprisingly sparse audience.

Vigil lacked profundity, and the one major (well-signposted) plot twist does not survive scrutiny, but it was the type of wickedly entertaining fare of which I’d like to see more. My experience at Lantern bodes poorly for established Philadelphia theaters. Thankfully, Philadelphia has an abundance of independent companies willing to take risks, shunning subscribers to put on shows that will appeal to new audiences. It is there that I will have to continue to look for more cutting-edge shows (and old people jokes).

But then, the admonition on the tomb in Masaccio’s Florentine Renaissance masterpiece, “What you are I was, what I am you will become,” works for aging as well as dying. Soon enough, I will see an old man on the bus and think “look at my reflection in that glass” and the Vigil character’s thought in the same situation, “what a waste of a seat,” will seem just plain unfunny.

*This piece is adapted from my Broad Street Review write–up of that show and was previously published by the Philadelphia Performing Arts Authority.