Christopher Durang’s Vanya and Sonia and Masha and Spike, a humorous take-off on Chekhov, won the 2013 Tony Award for Best Play. But this master of parody has been at it for decades now. In 2008, the Idiopathic Ridiculopathy Consortium presented three of his short parodies as part of the Philadelphia Fringe Festival. (Toby Zinman called them “eye-moppingly funny, and clever to boot”). Featuring spoofs of Tennessee Williams, Sam Shepard, David Mamet, and other American theater luminaries, IRC’s A STREETCAR NAMED DURANG returns this month for a brief seven-show run. 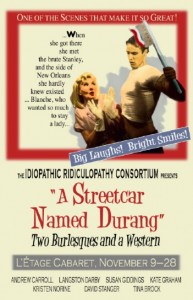 The IRC show includes three Durang pieces. His Desire, Desire, Desire, is an affectionate send-up of Tennessee Williams’ A Streetcar Named Desire and A Cat on a Hot Tin Roof, with bits and pieces of Marsha Norman’s ‘night Mother and David Mamet’s Glengarry Glen Ross. A Stye of the Eye is based on Sam Shepard’s A Lie of the Mind and includes references to Shepard’s Fool for Love and Curse of the Starving Class, John Pielmeier’s Agnes of God, and (again) Mamet’s Glengarry Glen Ross. For Whom the Southern Belle Tolls is an irreverent send up of Tennessee Williams’s The Glass Menagerie.