The crowd drifted around the gallery, admiring the ten-inch square panels created by over 250 artists. A soft violin chord rang through the air, a dancer gazed intensely at the audience, and a singer walked through the crowd. BALLETX’s intimate performance at the BRIDGET MAYER GALLERY featured a company dancer and performers from Murmuration, a dynamic and experimental ensemble. 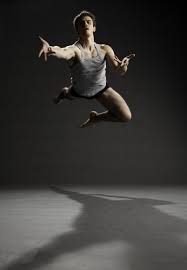 Andrew Marsh (vocals), Russel Kotcher (violin), and Eric Coyne (cello) mesmerized the audience with their beautiful pop-influenced classical style, while the BalletX dancer captivated viewers with his subtle and intricate movement. Andrew Marsh added elements of thought-provoking humor, such as when he mentioned that the young man had discovered the secret of not misunderstanding texts. The performers used the gallery’s space effectively—often interacting with the artwork hanging on the walls. Provocative and inspiring, the performance left the audience touched—wondering what exactly it was that they had not just watched but in which they had participated. [Bridget Mayer Gallery. 709 Walnut Street] September 9-14, 2014; fringearts.com/balletx-at-the-bridgette-mayer-gallery.