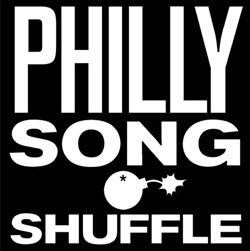 From a toe-tapping Peet Seeger sing-along to a head-banging rock and roll number, dozens of unique performances crowded the World Café Live Stage for PHILLY SONG SHUFFLE.  Hosted by the Xtreme Folk Scene, this fast-paced, 200-plus minute performance featured song after song.  And when singer Rachel Eve started to introduce herself, shouts of “Don’t say, just play!” rang across the stage, and she quickly adjusted her microphone.

Despite some initial technical blunders, the show ran smoothly.  The performers effortlessly entertained the crowd, like when Awful, Dreadful Bradley Keough and the Squishtones held up a sign that read “Hookers” on one side and “Blows” on the next or when Michael Tearson smashed a guitar on the floor.  Other highlights included Fernando C. Regencio Jr.’s Spanish-influenced strumming on the guitar and Andrea Nardello’s raspy, rock-influenced cello and guitar duet.  From contemplative a cappella to comedy and folk tunes, the PHILLY SONG SHUFFLE brought a range of styles onto the stage, making the night a fit for any listener. [World Café Live] September 10, 2014. fringearts.com/phillyshowshuffle.