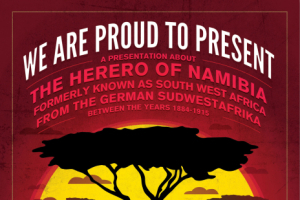 You know that moment when playfighting becomes real? Everything is nice and amusing until a pulled punch actually connects, and then laughter gives way to the sounds of a struggle. Things become very serious awfully quickly once people start getting hurt for real. That’s the main thrust of  WE ARE PROUD TO PRESENT A PRESENTATION ABOUT THE HERERO OF NAMIBIA, FORMERLY KNOWN AS SOUTHWEST AFRICA, FROM THE GERMAN SUDWESTAFRIKA, BETWEEN THE YEARS 1884-1915.

The stated goal at the top of the show is to be superfun, but the show ends with a long focus on a solo crying actor (and sobbing from the audience, at least on opening night). And it is superfun at the beginning, and super funny. The humor allows playwright Jackie Sibblies Drury to lead us on the path to an actual historical genocide, so that the horror doesn’t hit us in the gut until we’ve agreed to play along. Unfortunately, the comically-self-serious half of the show and the seriously direct half never quite add up. That said, the show is the closest I’ve ever seen to a Thomas Pynchon novel—arch and then harrowing, achingly funny and then deeply, deeply sad. [Arts Bank at the University of the Arts, 601 S. Broad St.] September 5-13, 2014. http://fringearts.com/event/we-are-proud-to-present.