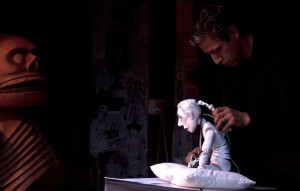 HBO After Dark meets Bunraku-style puppetry meets documentary theater in Laurencio Carlos Ruiz’s INCONGRUOUS. The piece is constructed of six short stream-of-conscious monologues from six characters who are dramatizations of real-life physically disabled persons, each represented by an erotic puppet. Ruiz harvests text from various direct quotes, a documentary, poem and an autobiography in order to breathe life into his exquisitely crafted and anatomically complete puppets. “Complete” meaning the puppets come fully equipped with: alarmingly accurate scrotums, a penis that spans the spectrum between flaccid and erect, pubic hair, and a baby’s mouth that can’t seem to let go of his mother’s nipple. This exhibitionist display is sure to make you smile.

While the craftsmanship of the puppets is impeccable (with each puppet hiding some magic trick, some theatrical reveal that makes the audience “oooh” and “ahhh”) and the handling of the puppets is expert, the performative aspect of the production falls flat. Ruiz’s forte is as a technician and designer which is evident in the delightful construction of his objects—however his execution of the text is such that the narrative of the stories is lost and does not match the exceptional level of the puppets themselves. The meaning of the piece would be lost on me if not for the director’s notes, where Ruiz is much more articulate than he is on stage. If mask/puppet making and performance is an interest of yours make the trip to Studio X; INCONGRUOUS is $10 and a brief 45 minutes, and Ruiz generously allows the audience to inspect and play with his puppets after the show. [Studio X, 1340 South 13th Street] September 5-21, 2014; fringearts.com/event/incongruous.