Reprinted from The Dance Journal with kind permission.

Some contemporary choreographers prefer not to explain, in concrete terms, what they intend their choreography to mean, but Trajal Harrell is happy not only to talk about his dance works, but also his creative process. In a phone interview from Berlin earlier this month, Harrell delved into the various aspects of his dance-theater opus Antigone Sr. / Twenty Looks or Paris is Burning at the Judson Church (L), before its opening as one of the centerpiece shows at 2014 Fringe Festival. 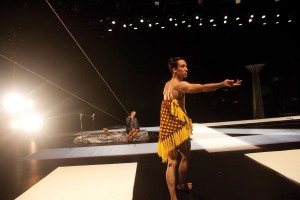 Harrell is a graduate of Yale University with a B.A. in American Studies with a concentration in Creative Processes, and has trained at Movement Research, The Trisha Brown School, Martha Graham School of Contemporary of Dance, just to name a few and he has been an artist-in-residence at several institutions in the US and abroad.

In Germany this summer, Harrell was on a month-long residency that coincided with preparing to open Berlin’s Tanz im August Festival “We’re opening the festival here with Antigone and rehearsing a new piece” Harrell said, apologizing profusely because he was running a half hour late because he took a wrong turn walking on the streets of Berlin.

Antigone is one of a series of seven ‘Twenty Looks’ all have different narrative contexts, designated as ‘sizes.’ Harrell developed the series over a three-year period. Antigone Sr.premiered in 2012 in New York where it garnered rave reviews and the Bessie Award for best production. It has since been touring it internationally, to further acclaim and sell-out audiences.

For the piece Harrell wanted to explore the foundations of western drama, “with new research coming out about ancient Greek Theater seemed to me similar to Harlem ball culture,” he explained. “They had rituals, a carnivaleque atmosphere; played with different expressions of gender…I thought Antigone was a play that could reveal some of the strategies and ideas that have similarities to voguing. In ancient Greece, men played both sexes. Of course, there was homosexuality, but this was not related to that aspect specifically. There wasn’t the type of sexual identifications that we have now. It had a different temperature, and way…I call it ‘Greek Theater realness.’ Harrell brings it himself as part of the show’s all-male cast, ala ancient Greek Theater.

Again, he makes a distinction between choreographers who have “put vogue vocabulary and modern dance together. That’s not what I’ve done. I’m looking at how the ideas under the performing of these styles how they operate and be reworked in other performance concepts,” he said, in this case framed with sordid tragedy of Antigone.

In addition to the full version of Antigone Sr./ scheduled for FringeArts, Harrell will also be performing his solo performance Twenty Looks or Paris is Burning at the Judson Church (XS), which asks the direct question if a voguer from 1960s Harlem had ventured downtown to the early post moderns at Judson Church, what would they have created?

Vogue and Harlem drag ball culture gained international recognition with the documentary Paris is Burning. Some of the dance vocabulary was siphoned off into mere posing in Madonna’s video depiction. Harrell checked out the genuine scene at the drag balls in New York and Atlanta “I really didn’t have a connection to the vogue scene. I saw Paris is Burning like everybody, but I didn’t go to my first ball until 1998 and I was kind of amazed, because I thought it was much more post-modern… in terms of its performance strategies, “ he said.

“Of course, it has changed over time, but the culture is still very strong. There is something about the New York houses, the system there and the ballroom scene that is incredibly vibrant form of performance and dance.”

Choreographically, it demonstrates, Harrell said “ a strong articulation that isn’t dependent as defined by the fine arts world,” Harrell observes. “The same is true for certain post-modern dance,” as it emerged in the Judson movement. “There are certain things you might recognize, but again I’m looking how they operate underneath and using those methods in other contexts. The ideas of authenticity in post-modern dance- how can these two things operate simultaneously in the same performance? That formulates my craft. Then something new is created.”

Aside from dancing in the piece himself, Harrell wanted performers who were not voguers or even American. “That was very important to me. I didn‘t want people who might be close to the representation of it, I wanted more distance. I wanted them to work from their imagination. Three of the guys are European and one is Canadian-Asian. The performers are just at the top of their game. And these performers created the work, know it and are at the top of their game.“

In 2013, Harrell mounted another high-concept work titled ‘Used, Abused, and Hung Out To Dry’ at the Museum of Modern Art. In it he explored the artistry of Taksumi Hijikata, the Japanese choreographer who created Butoh, an aesthetic movement in response to the atomic bombs that destroyed Hiroshima and Nagasaki.

Harrell admits to being pulled in different directions dancing, choreographing challenging works and running a company, but says he feels very lucky. “If you have an independent company and moving around internationally a lot, it’s is a balancing act. But that’s what we all do between work, our personal lives, emotional, psychological, we’re all constantly trying to balance. I guess when you get it right, you’re dead” he joked.

He said he is looking forward to performing in Philly and credits FringeArts producing director Nick Stuccio. “I‘m very excited about the Philly tour, Nick really understands what I tried to do with this piece, so I‘m so grateful that he got behind it and is bringing this work.”