Two groundbreaking plays in the history of queer theater–Lillian Hellman’s THE CHILDREN’S HOUR and Mart Crowley’s THE BOYS IN THE BAND—will be presented in the format of staged readings over the next two weekends by Mauckingbird Theatre Company. Each one features a powerhouse cast, and is part of the MAUCKINGBIRD MIX, which also includes MISS CAST 5: THE COLLEGE EDITION–the latest installment in the company’s annual cabaret event, hosted this year by Barrymore Award winner Jennie Eisenhower. 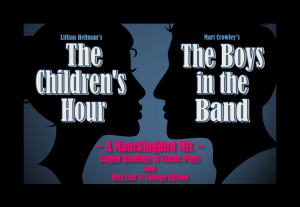 When Hellman’s devastating drama about homophobic hysteria and the destructive power of rumors and lies at an all-girls school premiered in 1934, the gay-themed classic became a critical and popular success on Broadway, but was subsequently banned in Boston and London as “indecent” because of its “lesbian content.” As a result, it became the subject of a landmark lawsuit in US Federal Court, when the play’s producer and the ACLU, in its first gay-rights case, unsuccessfully challenged the Boston ruling in 1936. Despite the loss in court, the case but brought significant attention to the issues of discrimination and censorship and engendered public scrutiny and discussion.

More than 30 years later, in 1968 (the year before the Stonewall Riots and the beginning of the gay-liberation movement), Crowley’s dark view of a queer birthday party in New York was no less controversial. Criticized for its “self-deprecating” humor and “self-loathing” characters, the intimate period piece was the first to reflect the damaging impact of homophobia, repression, harassment, and fear on urban gay men, and the original Off-Broadway production was honored with an Obie Award for Cliff Gorman’s performance as the flamboyant Emory (“I may be nelly . . . but I’m no coward”).

Mauckingbird’s presentations of these important works will be directed by Liz Carlson (THE CHILDREN’S HOUR) and Brandon McShaffrey (THE BOYS IN THE BAND). The former, which provides rare and powerful roles for women, will feature the all-star ensemble of Jessica Bedford, Kim Carson, Leah Walton, Cheryl Williams, and Nancy Boykin; the latter includes an equally noteworthy cast, with appearances by Jeff Coon, John Jarboe, Michael Philip O’Brien, Doug Greene, and Forrest McClendon (before his departure for London, where he’ll be reviving his highly acclaimed performance as Mr. Tambo in The Scottsboro Boys).\

Artistic Director Peter Reynolds is “thrilled to have these seminal works of queer theater heard, as interpreted by the outstanding actors who have joined us . . . In terms of significance . . .  Lillian Hellman’s THE CHILDREN’S HOURand Mart Crowley’s THE BOYS IN THE BAND are at the top of the list.”