Berlin was the 20th-century’s battleground. After the convulsions of its own murderous fascism and the Red Army’s retaliatory annihilation, it became the front line in the Cold War. Cut in two by concrete, barbed wire, and a stretch of no man’s land, the city embodied a clash of ideology played out under daily threat of nuclear apocalypse. The work of East Berlin playwright and poet Heiner Müller reflects these tensions and sense of historical catastrophe. 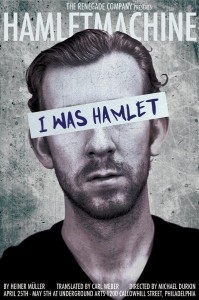 Scattered on the floor of the Philadelphia’s Underground Arts space are torn-up pages from Shakespeare’s HAMLET and Euripides’s MEDEA. In HAMLETMACHINE and MEDEAPLAYS, now in seemless production at the space by The Renegade Company, Müller has reassembled the classic texts and plot-points into a dislocating new context.

“I was Hamlet,” the title character (Griffin Stanton-Ameisen) begins, launching into a series of dense monologues that consider the Shakespeare play, Cold War politics, the role of an actor, and much else. Müller’s work has been described as “postdramatic,” and the works follow no plot, no character arc. HAMLETMACHINE is to classical theater as “The Wasteland” is to “I Wandered Lonely as a Cloud” or Rauschenberg is to Carvaggio. It is a challenge in the best sense of the word.

Postmodern deconstruction can make for uncomfortable theater. This is an immediate artform which provides little space to leisurely come to terms with a work. To succeed, HAMLETMACHINE requires stellar acting to engage the audience in the poetry and philosophy of the words and retain attention without plot twists or conventional drama. Stanton-Ameisen delivers, with fine support from Dani Joy Own (as Ophelia et al), Kevin Chick, and Corinna Burns (who also stars as Medea). Director Michael Durkin has brought coherence — or at least a semblance of clarity — to these difficult works, leaving the audience to enjoy their profound gems.

“The scenery is a monument,” Hamlet-Actor declares, considering his environs. “It portrays a man who made history, a hundred times life-size. The petrification of a hope. His name is interchangeable. The hope has not been fulfilled. The monument lies on the ground, razed.”

Müller said about his life that it was lived through two dictatorships, and although he feels disillusioned by socialism, there is no longing for “freedom” or “democracy” in his lines. In the libertine consumerism of the West, the playwright sees Berlin littered with the rubble of coke cans. Turning on the television (“Give us this day our daily murder”), symbol of the West, Hamlet feels “Disgust/ at prefabricated babble At manufactured merriment… Revulsion/ At the lies which are believed/ By the liars and no one else Revulsion/… at the faces of the power-brokers lined and seamed/ from the struggle for posts, votes, bank-accounts.”

“Something is rotten in this age of hope.”

The Underground Arts is currently completing renovation, and promises to be an improved and welcome venue for theater, music, and arts. As an open industrial space, dimly and interestingly lit, with a central bar and two stages, it would feel at home in 1990s Berlin and provides a perfect setting for the Müller plays. Their staging also benefits from the inventive and open lighting design by Michael Hollinshead and complementary sound design by Daniel Kontz. These elements combine with the thought-provoking performance for a transportive theatrical experience. Just don’t expect accessible, light entertainment.