John Donges is a Philadelphia-based artist who studied science and art in college. John is the in-house photographer for the University of Pennsylvania School of Veterinary Medicine. When not shooting animal surgeries, he enjoys Philadelphia and people as subject matter.  John also performs on stage with the Dumpsta Players and is serving on the board of DP Arts Consortium. He has been shooting for Quince Productions for five years. 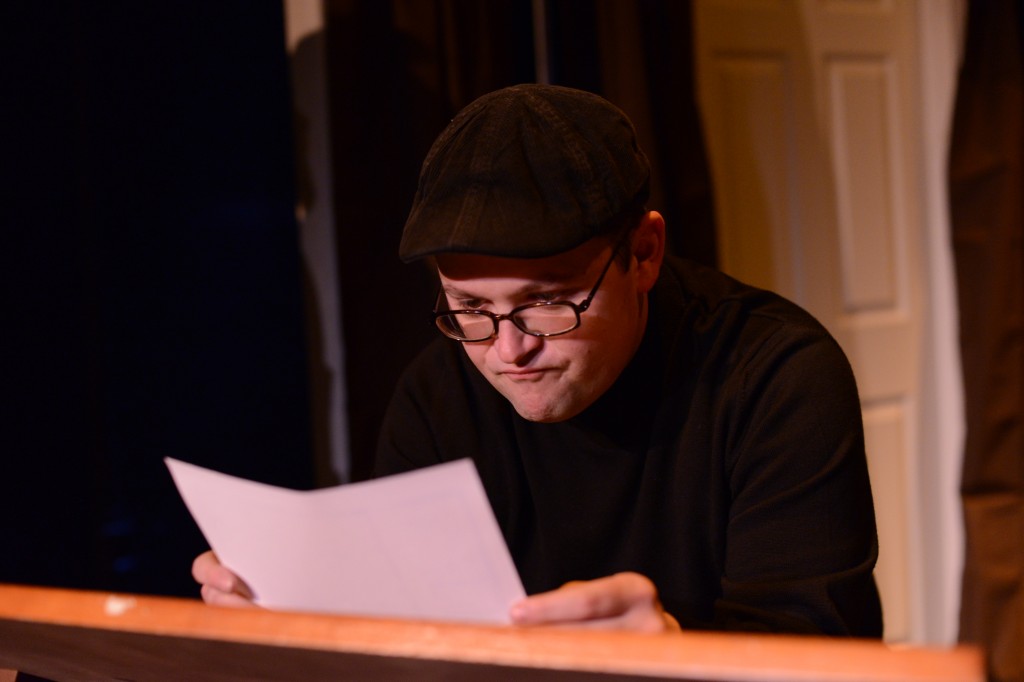 In shooting Richard Greenberg’s THREE DAYS OF RAIN, my first photographic challenge was to capture the unique structure of the play: the first act is set in 1995 and involves a brother/sister and their old friend – the son of their father’s architecture partner and oldest friend. In Act II, the three actors play the parents of their Act I characters. So it was a dual challenge to photograph basically two casts instead of one, and to try and paint a visual portrait of what is both similar and different between each character and his/her parent, and to portray the look of two very different decades.

To add to the interest, the two acts are set in the same loft/studio, which has been abandoned in Act I when Walker (the brother) moves in, but is more colorful and full of life in Act II. Two very different settings as well as two very different sets of characters: how could I convey this? Technically, the challenges were to reflect the fuzzy, not-quite-accurate memories of Act I in this dusty, abandoned, washed out space, while maintaining the sharp focus of these three distinctive characters. Then, how do I capture the more vibrant environment but at the same time distant-in-time feel of Act II, especially with its alternation between sun and rain?

I’ve photographed two dozen shows for Quince, in a variety of settings from outdoor, urban scenes against a graffiti-covered wall to basement rehearsal rooms where our “set” in the pre-production phase consisted of a ladder and a bucket, or a “bed” made of two couch cushions and a suitcase covered with a comforter. It was a very different process to be photographing the actors on the set, in the theater, performing the play, and helped me go further in presenting a more complete picture of the play. We decided to do the shoot with ambient stage light rather than adding light, so as to capture the real feeling of the play. Shooting with my Nikon D600 camera with a 50mm 1:1.4D lens, I was basically reactive for the whole shoot, trying to adjust to changing conditions of either people moving or light changing, but mostly the light.

I wanted to capture each set of relationships – brother and sister, old friends, people in a relationship, moving out of one, and getting into a new one (I don’t want to give away too much). I wanted to suggest the couplings and uncouplings and past couplings and couplings that never happened etc. in a way that was just that, suggestive, that intrigued the viewer as to how things might unfold without giving them too much. It’s my job to interest them in the story, not to ruin it for them. 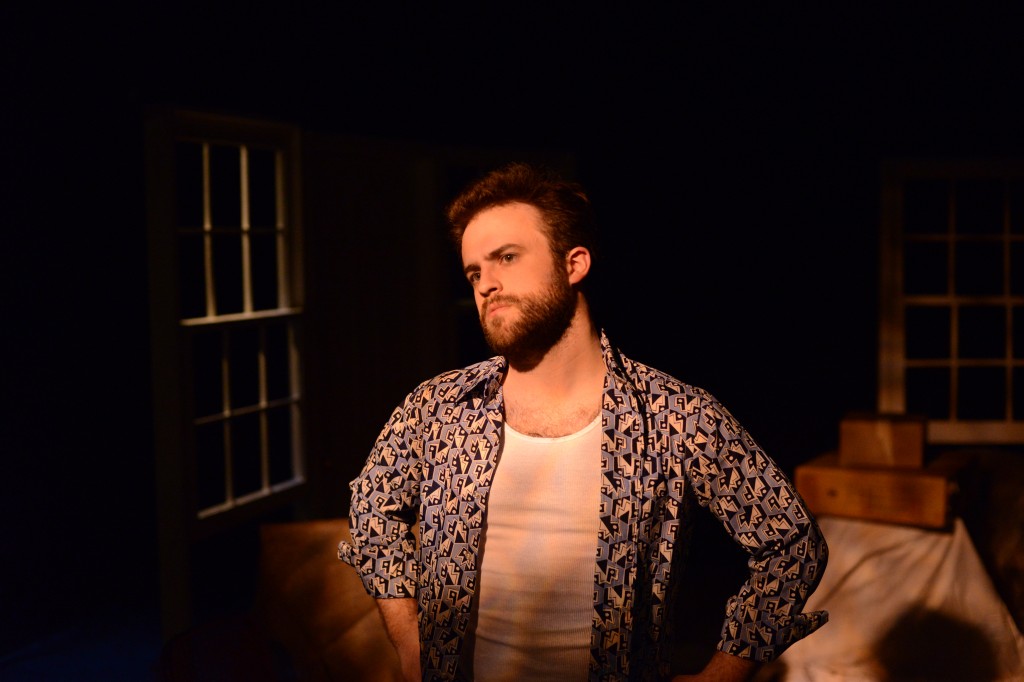 Mark Sherlock as Walker. I love the way his crazy shirt makes him pop from the background. 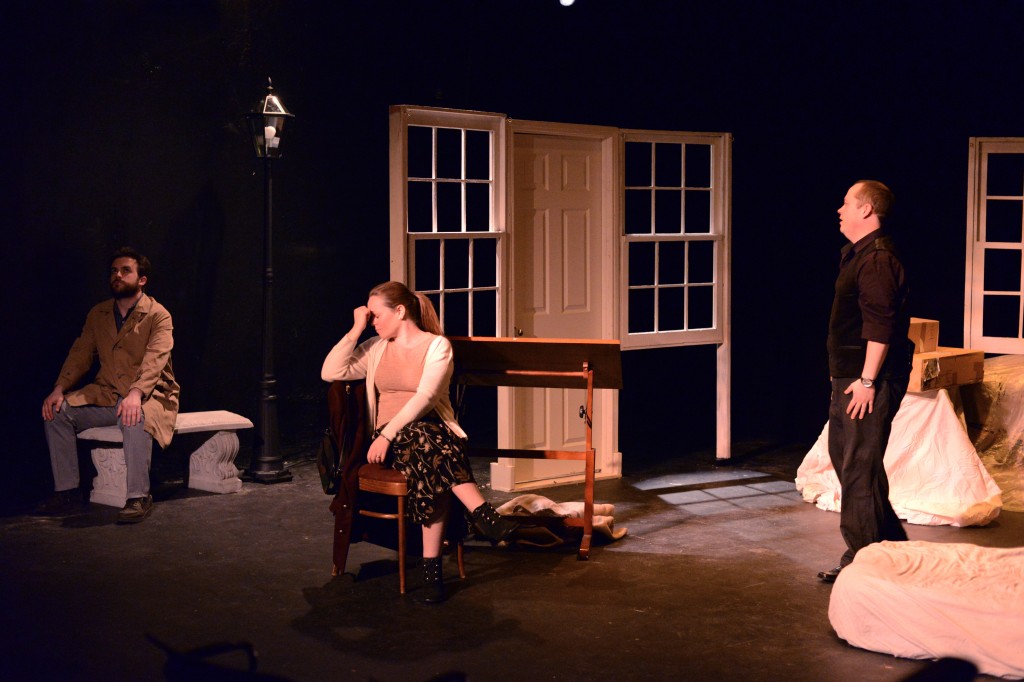 This is one of the few scenes in the play with all three characters in it, and I was interested in the contrast between the indoor and outdoor settings, with a slightly brighter light on Nan and Pip (Jessica Snow and Robert Ian Cutler) inside, and Walker (Mark Sherlock) isolated outside but with the focus moving towards him. 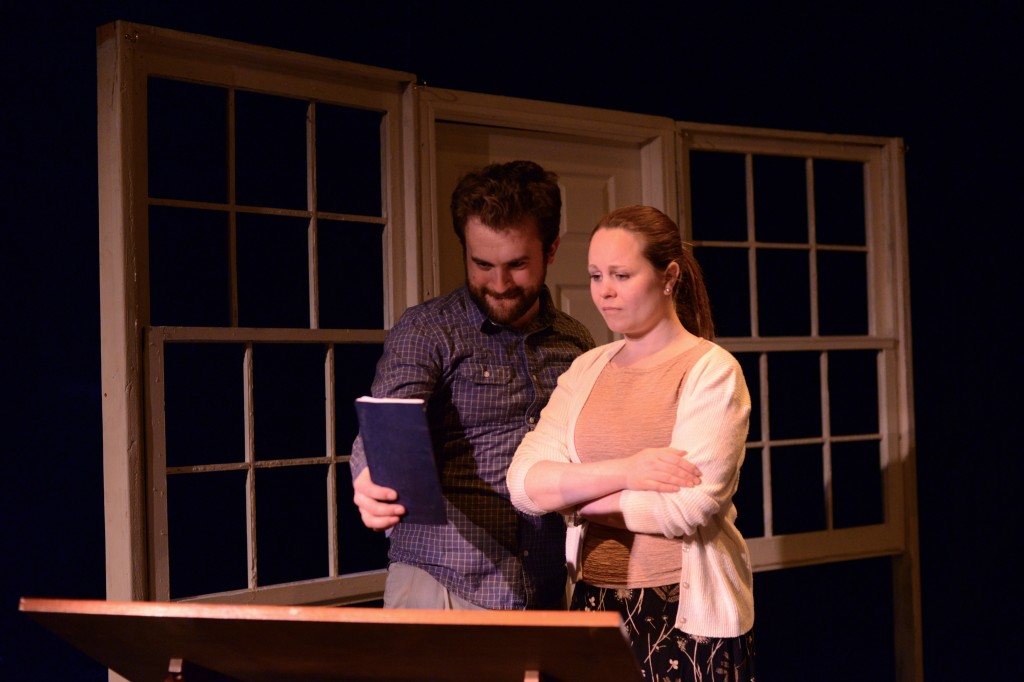 This ultra-important moment towards the end of Act I shows the contrasting feelings of Walker (Mark Sherlock), who’s excited about his father’s journal, and his sister Nan (Jessica Snow), who’s a little dubious. I wanted to convey the feeling of something important about to happen without letting on what that “something” is. 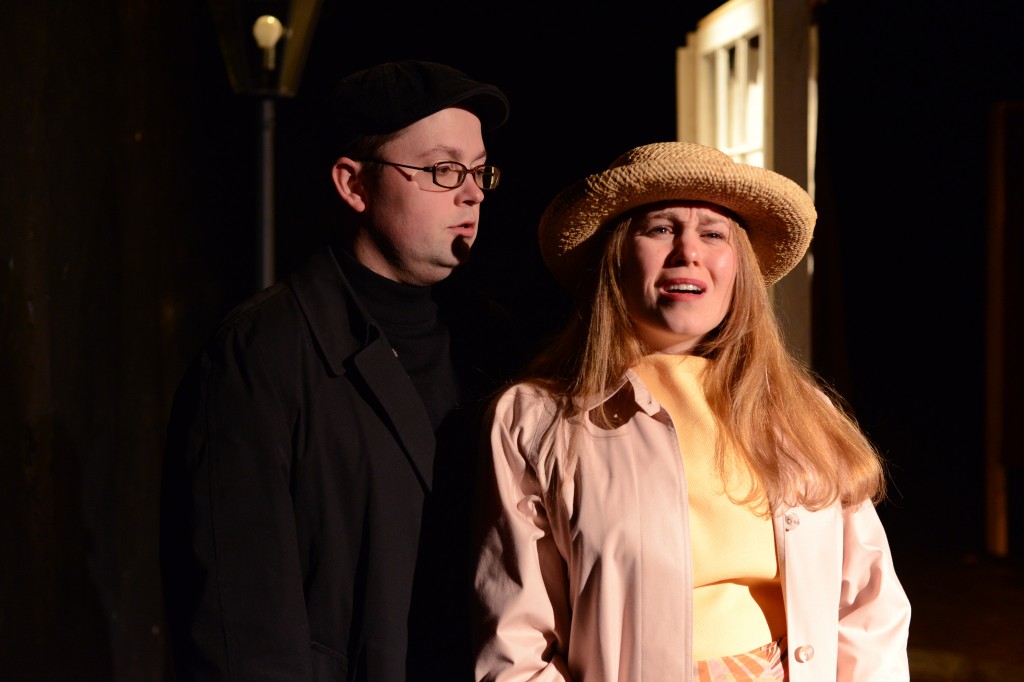 In Act II, Robert Ian Cutler and Jessica Snow play Theo and Lina, the parents of (respectively) Pip and Nan from Act I. The street light and shadows emphasize for me the period costumes in creating a back-in-time feel. 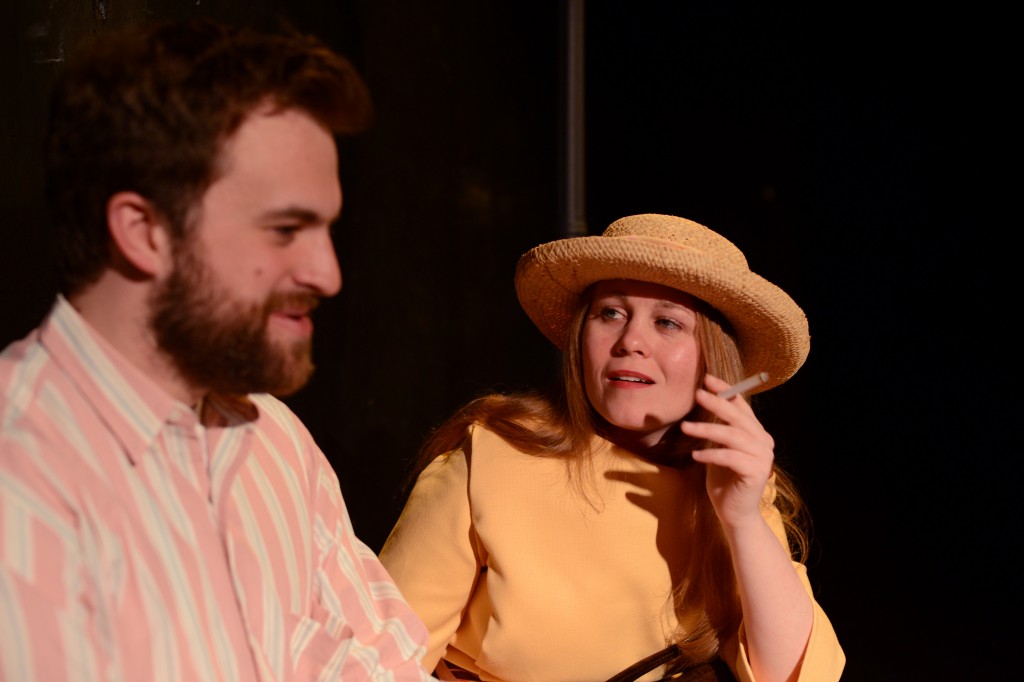 Ned and Lina (Mark Sherlock and Jessica Snow), the parents of Walker and Nan, in a scene that’s pure 1960, from the clothing to the cigarette Lina holds. The focus moves to Lina by keeping Ned on the edge of focus. 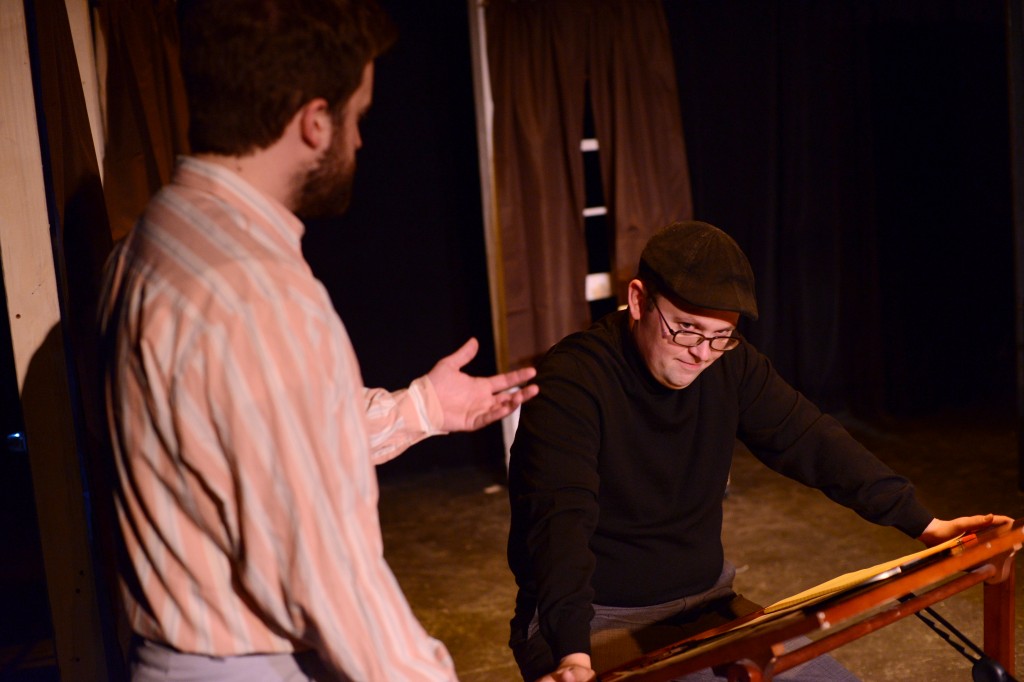 Ned (Mark Sherlock) and Theo (Robert Ian Cutler) in their architecture studio. The director loves these shots looking past the back of one character, and I think in this case it’s a good way to focus in on Theo and show the differences between him and Pip (Cutler’s first act character). 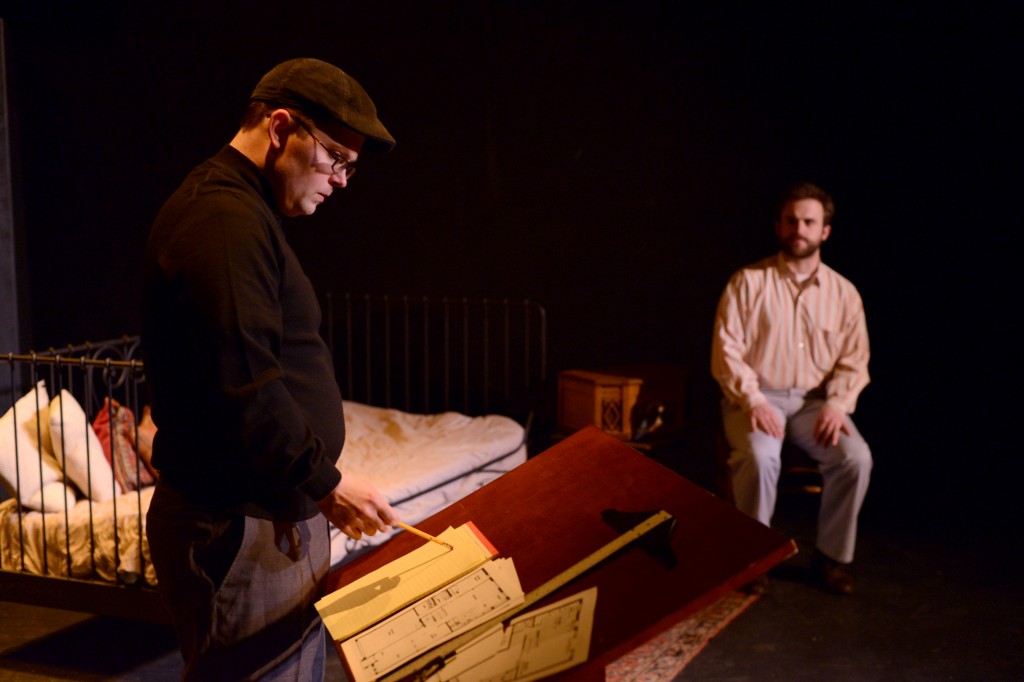 Another view of Robert Ian Cutler as Theo and Mark Sherlock as Ned. I like the prominence of the drafting table, as the architecture work is all-important in the show. 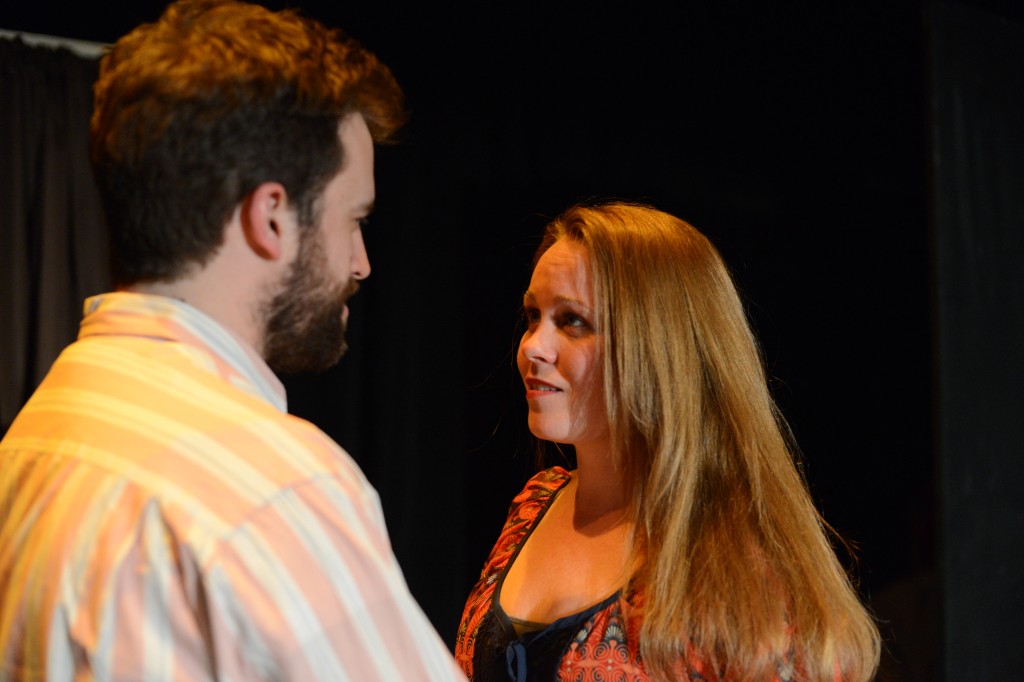 Mark Sherlock as Ned and Jessica Snow as Lina. Ms. Snow’s face is so expressive that I took several of these to get just the right play of light across it. 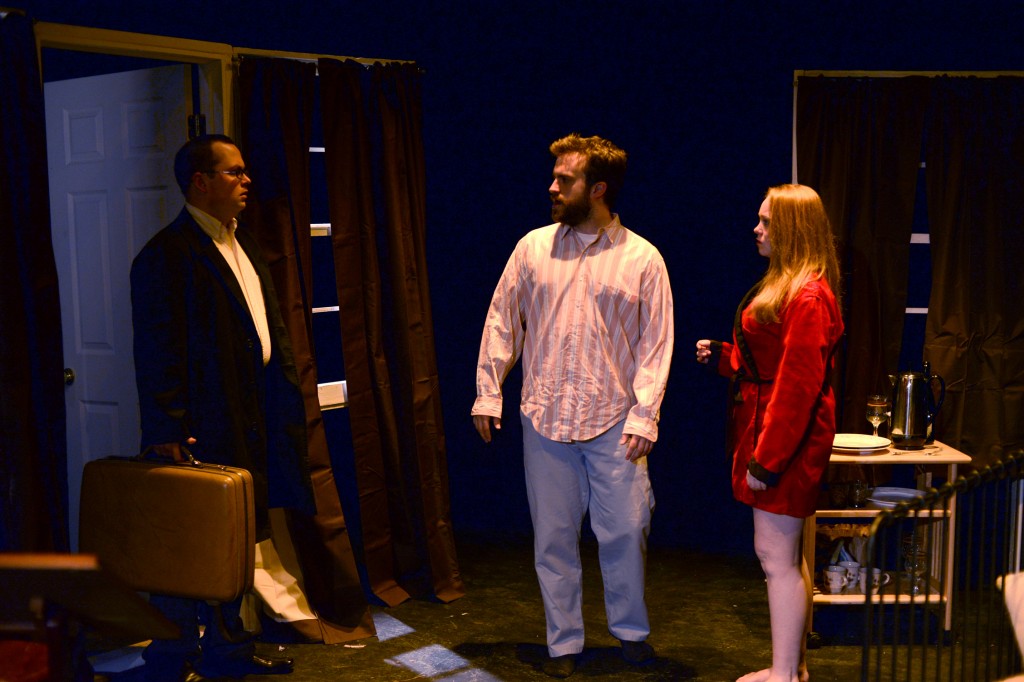 I like the mystery of this shot, with (from left) Robert Ian Cutler, Mark Sherlock, and Jessica Snow. It’s a crucial scene in Act II, and the photo suggests something important happening without giving away the game. 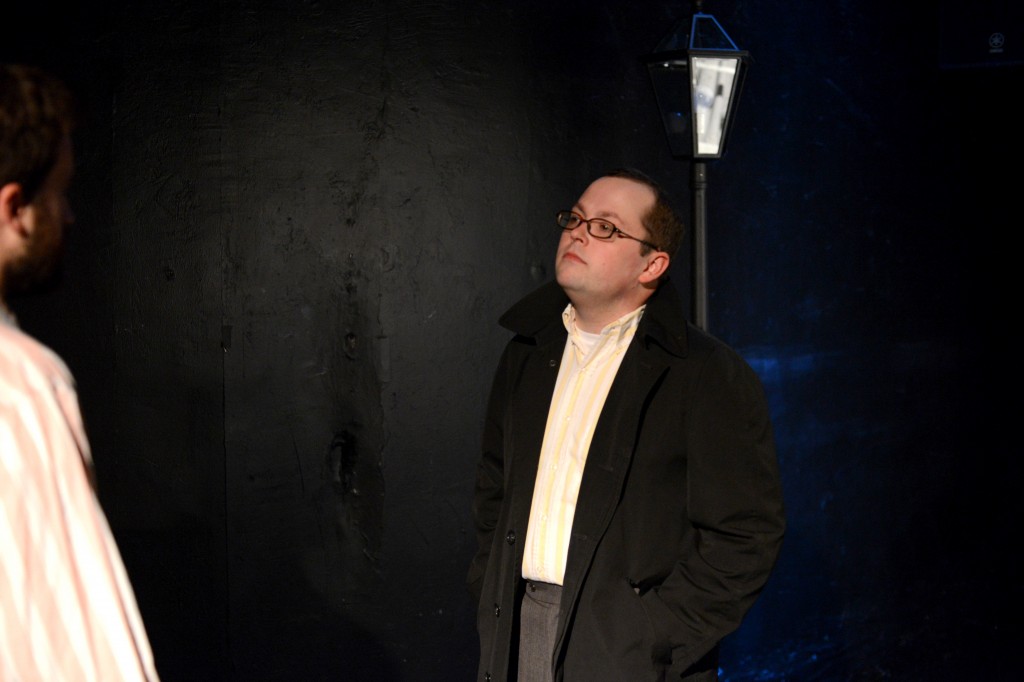 Mark Sherlock as Ned and Robert Ian Cutler as Theo in an important Act II scene where Pip brings the news that….well, I can’t tell you that. 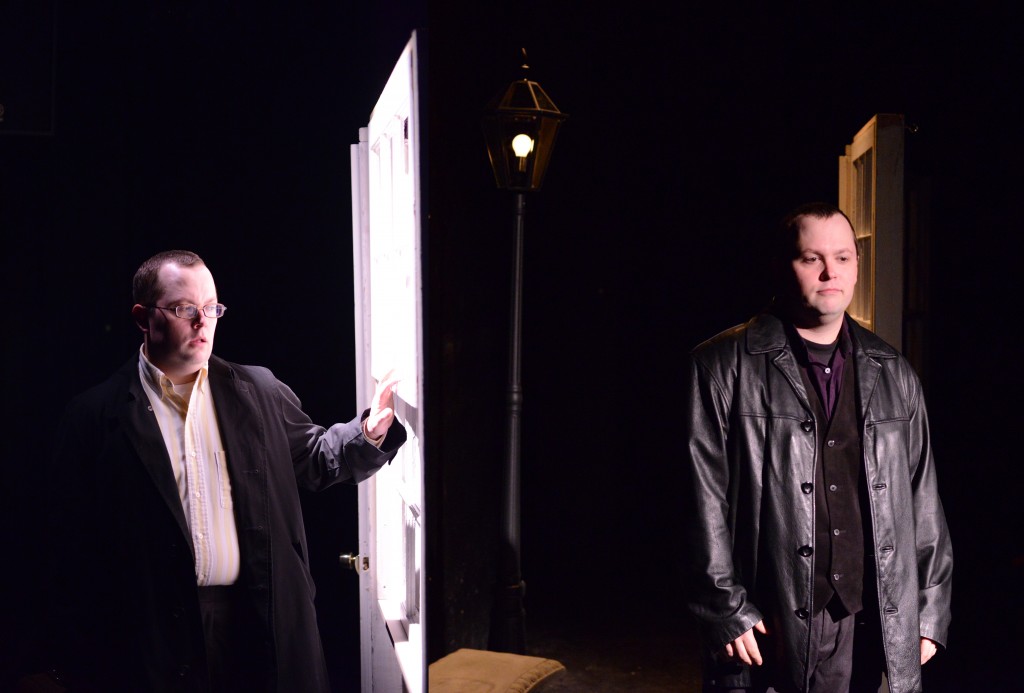 These two shots of Robert Ian Cutler contrast his characters in the different acts nicely having the light from inside illuminate him in a moody way in the Act II shot (left) and lighting him from the street lamp for a more innocent look in the Act I shot (right).