They say write what you know. Suitcase in hand and worlds in his head, Thaddeus Phillips knows from traveling across borders. Lucidity Suitcase Intercontinental has always been travel based. With co-creators Tatiana Mallarino and Patrick Nealy, and director Rebecca Wright, Phillips has concocted something special with 17 BORDER CROSSINGS. 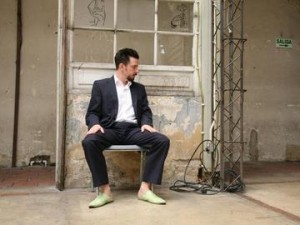 “Let’s assume you’re traveling,” he says, placing the audience as the sojourner. And he whisks us off.

But in the opening moments, noting the solo actor sitting at a table, there’s a passing thought of other story-telling presentations. Mike Daisey comes to mind. However, any similarity to desk-bound narration is short-lived as Phillips walks, tap dances, and rolls around, acting out all the parts, absorbing accents, and doing dead-on impersonations of petty officials.

Another possible initial misconception: It looks like this might be fairly low-tech, what with the wooden chair and table. But anyone who knows Lucidity Suitcase Intercontinental is not fooled. I believe I’ve caught all Lucidity’s stuff performed here since FLAMINGO/WINNEBAGO in ’07 — all massive coordination jobs. Some in the room will have seen Phillips’s LOST SOLES  way before I picked up on him.

Imagination? There’s oodles as the performance delves into remembered or constructed incidents and imagined territory, with shifts in perspective you wouldn’t have thought of.  As the tales being told and the design merge together, the few items onstage will be turned every which way, performing close service to the narrative. A long, hanging, sometimes slightly waving, light-bank tricked out with multiple lighting contraptions (and some sound) provides practical backup and illusion. The sound design features all kinds of transportation noises, music, and incidental sounds. Working with Phillips, lighting designer Maria Shaplin and sound designer Robert Kaplowitz have created a constellation of evocative atmospheres.

As we move from border crossing to border crossing, it’s fascinating to wonder what’s next in this adventure and education.  Easy-going, but extremely efficient, Phillips dispenses lots of information through fragments of individual situations, along with a twist of sardonic flourishes. Engaged with the content, and never losing sight of the whimsical, he keeps the focus on the story. I’d caught part of the show the night before and was surprised to see that all the details aren’t necessarily done exactly the same way each time. Little differences fit into the always-moving agenda. He never neglects the details, like remembering to turn on and off a “horrific green Communist fluorescent light” when it’s called for. And it’s surprising that such an experienced traveler can so minutely describe flight anxiety.

In the FringeArts theater’s comfortable seats, we armchair travelers participate in the discoveries that virtual travel affords.  Even as Phillips’s fancy footwork throughout his rich space-and-time travel extravaganza entertains, we may learn something too, beyond the abuses of officialdom and the acquisition of some foreign words. (“You mysteriously begin to understand Portuguese.”) Elusive things hang in the air – like finding meaning in life by living authentically within the confusion of human experience, and like gaining empathy with desperate people, and reaffirming the importance of compassion. At the end I have a smile on my face —along with virtual jet lag. November 13-17. 2013, fringearts.ticketleap.com.