Actor and audience favorite, Ben Dibble, is set to take the stage in Walnut Street Theatre’s upcoming production of ROCKY, The Musical. Dibble, who is also an adjunct professor at the University of the Arts, will be playing the Referee and fight promoter, Miles Jergens. The Philadelphia actor says Philly pride is running high as the cast and crew prepare to bring this “hometown” hero to stage! 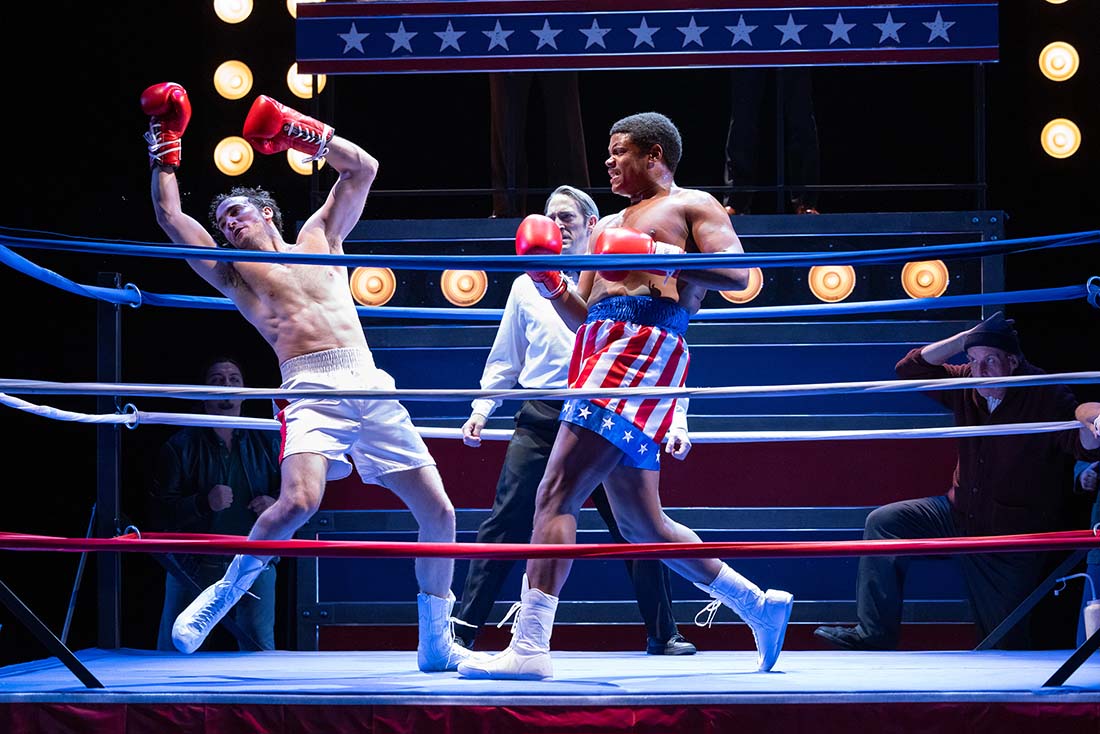 Debra Danese: Which Rocky movies have you seen and which is your favorite?

Ben Dibble: I have seen the original Rocky, of course, and also Rocky III and Rocky IV. While it is hard to beat the heart and grit of the original, with all of its Philly locations and references, my personal favorite is Rocky IV. I remember watching it as a kid and all of the Cold War rivalry and Iron Curtain intrigue really stuck with me. I think I probably watched this around the same time as the original Red Dawn film!

DD: What makes this story work well as a musical?

BD: Any musical needs to feature a story where the characters have so much to say that words alone won’t do it. They must use music to express their wants and feelings. Rocky has such depth, and the original film is really a gritty character study into the inner lives of these humble Philadelphia folks. I think that allows for some of the songs to be really intimate and personal, and other large numbers to be incredibly vibrant and cinematic.

DD: What was the first day of rehearsal like?

BD: The first day was so exciting! First of all, Rocky is my 25th show at the Walnut so every first day of rehearsal feels like a kind of homecoming to me. Secondly, we were originally set to start this show in the fall of 2020. After a two-year pandemic delay, it was a huge relief to finally be in the room to work on this regional theatre premiere with this extraordinary group of artists. For many cast members, this is their first show in two years! For the local actors, it is so satisfying to be working on a musical that is set in Philly. The hometown pride is running high!

DD: Did you ever get hit while refereeing the fight scenes?

BD: I haven’t gotten hit while refereeing the fights…so far. All kidding aside, these actors have been working incredibly hard with our fight choreographer to create as visceral and realistic a boxing match as possible, while also taking every safety precaution they can. We start slowly, marking through the fights at half speed. They are then able to go a little faster with each repetition. By the time we get in front of the audience, I think people will be flinching and cheering and really feeling those punches along with them.

DD: What do you do during intermission?

BD: We have a room backstage, called the green room, where the actors and crew are able to hang out during the show. My good friend Fran Prisco, another Walnut favorite, is playing Paulie in the show. Any time we have offstage time together, you can most likely find us in the green room playing cards. Our favorites are Cribbage and Euchre, both of which we have taught to many a castmate over the years! We even held a Cribbage tournament in between performances of Fiddler on the Roof years ago because we had so many card players in the cast.

DD: What is it about WST that keeps you coming back season after season?

BD: I think what keeps me coming back, first and foremost, is that I am lucky enough that they keep asking me! As an actor, we are hired on a show-by-show basis. I feel truly blessed any time a theatre invites me back to work with them. The Walnut has always treated me well, and they really value family. My kids have spent a whole lot of time in the green room over the years. Now they are all teenagers, so they have practically grown up in that backstage area!

DD: What is the best advice you’ve given to a student?

BD: I always say to my students that the most important assets for an actor are drive and resiliency. Talent, skill, craft, personality, and networking are all important. However, in my experience, the actors who work consistently have the drive to get better every day. They have the resiliency to take the setbacks and disappointments that go hand in hand with a career in the arts in stride, and keep moving forward. Life as an actor has many challenges. Those of us who are able to juggle multiple jobs, family life, and still tell stories from the stage to a live audience every night, consider ourselves truly fortunate.

ROCKY, the Musical is at the Walnut Street Theater on October 4-November, 2022.

One Reply to “Actor Ben Dibble steps into the ring in ROCKY, The Musical”