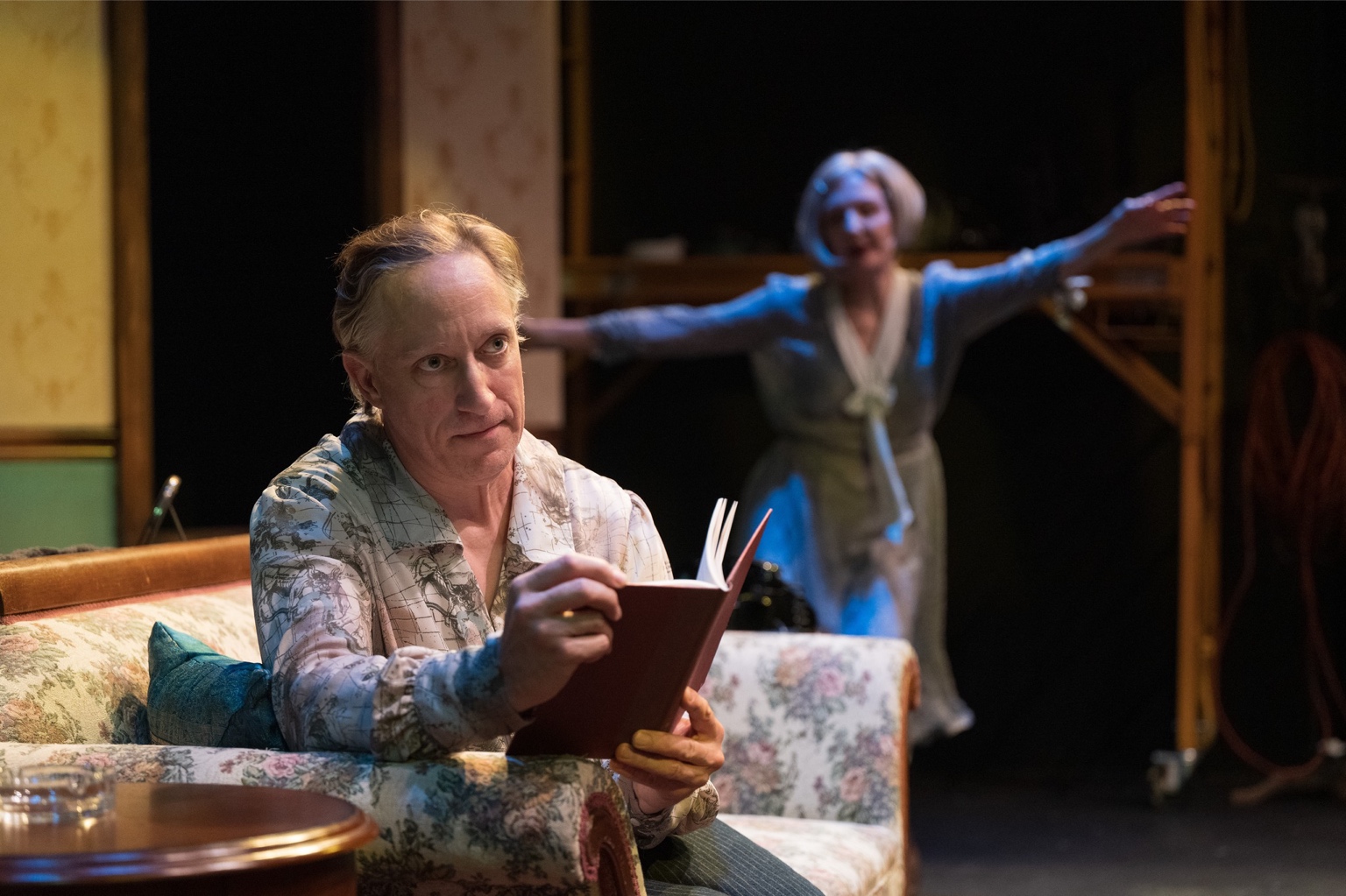 This play-within-a-play about a play takes place on the Bluver Theatre’s tiny stage, brightly lit, although called dim by the characters. The audience,  up close and personal, is referred to frequently.  The Two Character Play (Outcry) concerns a brother, Felice, and his fragile sister, Clare, trapped in a theater they cannot escape.  Clare, caught in her own psychological prison, has heavy shades of The Glass Menagerie and Tennessee’s sister, Rose.

Clare and Felice, survivors of a horrific family tragedy, maintain a measure of understated compassion for each other and sustain hope where there is no hope, even as piano banging and unending bitter arguments distract them from their intractable plight. Tennessee Williams leaks out their story: There’s a father’s psychic paraphernalia and a growing sense of menace and a story of something that happened begins to spool out.

The actors, consummate veterans,  are ridiculously sublime. John Zak can handle sensitive material or rough material, as he did in The Eccentricities of a Nightingale and The Alchemist.  Also Jihad Jones & the Kalashnikov Babes, and even Caliban in The Tempest. Tina Brock, very well known for her Idiopathic Ridiculopathy Consortium, her absurdist bent, and her tight directing, needs no introduction.

Good direction by The Company and Peggy Mecham (Director, Irish Heritage Theatre) and top of the line designers—sound, scene, lighting, costume, who know what they’re doing… and so  fitting to have Edvard Munch art on a screen.

Williams forces us to look into the haunted and mystic place where he had trapped himself in his life. Theater made him and raised him high. Much was expected – too much. Critics targeted Williams and made a Saint Sebastian of him. He went on because there was nothing to do but continue, and in the process spilled his guts out upon the boards. Pills and alcohol provided short-term succor but finally couldn’t pry blood from a drained play-dog. This is the way the world ends, this is his horrid cry in the gas-lit wilderness, the play he called ‘the very heart of my life.’ Tom Williams wound down like a clock until his ordeal ended, leaving behind an unequalled canon.

Sadness, self- imprisonment, sunflowers, and a monstrous grotesque statue hiding on the side of the stage. Watching The Two Character Play is harrowing.  It can’t be tossed off as a bit of momentary whimsy. It’s a sterling performance by both actors of a pretty damn depressing play. While it is prime theater and arguably good for your soul, no one but a stone masochist would willingly sit through it twice. Should I go home or should I just shoot myself?

Note:  I count two degrees of separation between Tennessee and me: my best friend’s father slept with Tom, but not like that. They were boys in St. Louis. Tom Williams had ridden his bike over to the house. It got late, and rather than let him ride home in the dark, Tom was invited to stay the night. So the boys shared the bed.