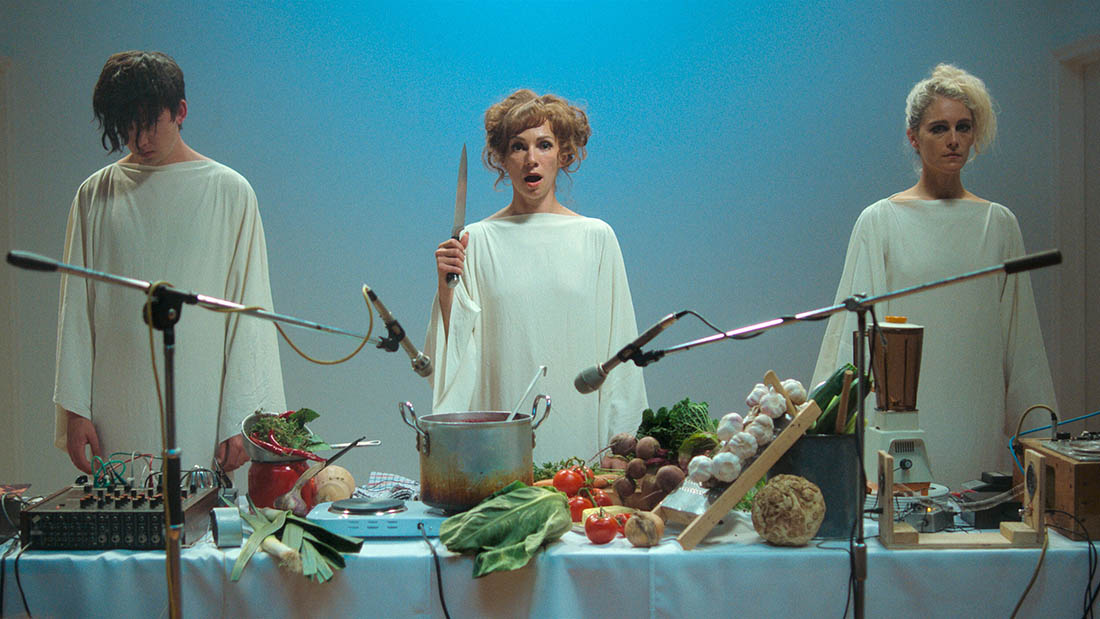 Peter Strickland’s Flux Gourmet is another auteur-flavored oddity all the way. Capturing the senses whether it’s through sound mixing in film production (“Berberian Sound Studio”), a bondage relationship (“The Duke of Burgundy”), or lethal retail (“In Fabric”), writer-director Strickland is undefeated in making a film that is distinct and almost always fascinatingly strange. Like his previous work, Flux Gourmet is definitely an acquired taste. But as a bizarre, absurdly po-faced black comedy about art, food, autonomous sensory meridian response (ASMR), and flatulence, it’s really true this time.

A dysfunctional sonic collective takes a residency at the Sonic Catering Institute, run by director Jan Stevens (Gwendoline Christie). The three-person band of culinary performance artists, including Elle Di Elle (Fatma Mohamed), Lamina Propria (Ariane Labed), and Billy Rubin (Asa Butterfield), make sound with food. While battling creative differences and can’t even decide on a name, these provocateurs’ process is being documented by writer Stones (Makis Papadimitriou), who suffers from gastrointestinal issues and spends a lot of time in the shared bathroom. Nothing that follows could possibly be predicted.

Flux Gourmet will likely baffle and not make traditional sense, nor does it owe anyone an explanation. What it does do is cook up an off-kilter, sumptuously designed, aurally immaculate cauldron of ideas that’s worth a look and listen. Strickland’s use of sound (more accurately, the sound design) is key here, and so is his meticulous production design, to the point of being fetishistic. Also, notice how Gwendoline Christie’s lavish, flamboyant costume design as Jan Stevens keeps changing.

In a way, this is a playfully satirical takedown of the insular art world and how self-important artistes, especially of the avant-garde variety, can be without the film itself being self-important. Makis Papadimitriou grounds the whole thing (and narrates throughout), and his gastrointestinal discomfort is never treated like a cheap joke but as a digestive ailment diagnosed by the institute’s self-impressed Dr. Glock (Richard Bremner). The rest of the cast commits to the lunacy with straight faces, especially Fatma Mohamed, perfection as the dictatorial and patronizing Elle.

Flux Gourmet is droll, lurid, and unique. It will be as divisive as all art can be, but if you get on Strickland’s singular wavelength and immerse yourself in this eccentric world, what an enticing audio-visual feast.