The grotesquely fantastical corrodes perfectionism in the coming-of-age horror tale “Hatching.” Like a gooier tween “Black Swan,” director Hanna Bergholm’s assured directorial debut brings writer Ilja Rautsi’s script to life, as well as a beautifully disgusting metamorphosis that changes everything. A satire of suburban ennui melded with a girlhood drama has never morphed more seamlessly into a body-horror monster movie.

Tinja (Siiri Solalinna), a focused 12-year-old aspiring gymnast, has to constantly appease her selfish, perfectionist mother (Sophia Heikkilä) with a smile. Her submissive father (Javi Volanen) and annoying younger brother (Oiva Ollila) go along with it. One sunny afternoon as Mother is curating a happy video for her family vlog “Lovely Everyday Life,” a squawking crow crashes through the window and makes a mess of their just-so living room. Tinja manages to catch the crow and brings it over to Mother, who nonchalantly snaps the bird’s neck and hands it back for organic composting. When Tinja later finds an egg in the woods, she takes it home and hides it under a giant teddy bear. It grows at a rapid rate, until something eventually hatches from the shell and shares a psychic connection with Tinja.

Siiri Solalinna is preternaturally fantastic, eventually pulling double duty as Tinja and the birdlike doppelgänger that she mothers and protects. Beyond the abusive pressures of perfecting her gymnastics routine for an upcoming competition, Tinja’s relationship with her mother becomes even more oppressive. When catching Mother getting fresh with the hot handyman, Toro (Reino Nordin), reinstalling their fallen chandelier, Tinja is entrusted with that secret. Of course, Tinja already has her own growing secret, which becomes the source of her own maternal instincts. Sophia Heikkilä is also quite chilling as Mother, especially when her façade of being the best and playing house finally cracks. 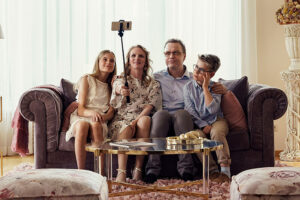 A wonderfully twisted, pastel-colored Finnish fairy tale of the fractured sort, “Hatching” is like an egg itself: it looks like a sunny girlhood story from afar but something different is actually being born inside. What could have been schlocky or too on-the-nose to function instead finds a precise balance between the thematic richness of this material and the gross-out genre trappings of a monster-run-amok movie. The slimy, gawky hatchling that Tinja names Alli—yes, it’s a symbol of puberty—is a vividly icky (and charmingly handmade) creation made tactile with practical make-up and animatronic puppetry. Practical is always the way to go, and maybe with a few subtle CG touch-ups as needed.

Escalating steadily, “Hatching” stares down an inevitable conclusion and goes there with, you guessed it, perfection.