“You Won’t Be Alone,” Goran Stolevski’s writing-directing feature debut, is something special. More than just “arthouse horror,” Stolevski’s film is a haunting meditation on identity, humanity, and how everything is relative, but also a sensory experience with some bloody innards. It’s unsettling, yet challenging and magical, and if you just let it wash over you, the spell is rewarding. 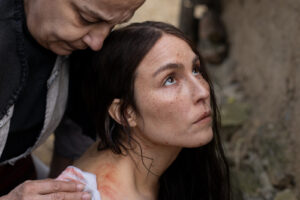 Set in a 19th-century Macedonian village, the film begins with a cat that is not actually a cat. That cat eventually morphs into the folkloric Wolf-Eateress, a grotesquely burned old witch. She visits peasant farmer Yoana (Kamka Tocinovski) and her crying infant named Nevena. Standing by Nevena’s crib, the witch asks for just a little blood from the newborn. As a bargain, the witch allows the horrified mother to raise her daughter until she turns 16 but not before taking Nevena’s tongue. Like Rapunzel, Nevena is kept isolated in a nearby cave for all of her childhood. Once it’s her sweet birthday, the mute Nevena (mostly played by Sara Klimonska) is met by the Wolf-Eateress (Anamaria Marinca), who takes her under her shape-shifting wing and marks Nevena’s chest with her black claws. To stay alive, they try on different skins and feast on blood to heal themselves, but as Nevena begins her journey, she’ll learn what it actually means to be human — experiencing empathy, love, despair and more.

“You Won’t Be Alone” is all about individual perspectives. As we come to learn more about the centuries-old legend of the Wolf-Eateress through children’s campfire stories, it’s revealed that the witch wasn’t always a witch, and she was not the first Wolf-Eateress, either. Instead, she was known as “Old Maid Maria”, who only wanted a husband and children. Anamaria Marinca is cunning and spiteful in witch form, literally ripping out her hosts’ entrails from her own body after she’s done with them, but heartbreaking as Maria. By seeing her wishes to meet a man and have a child ripped from her as Maria, the Wolf-Eateress becomes more pitiable, even as she rages with envy and never-ending loneliness. 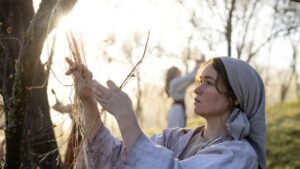 With the patience, visual language, and thematic breadth of an auteur, “You Won’t Be Alone” immediately marks Goran Stolveski as a confident filmmaker who’s just getting started. Sometimes reminiscent of Terrence Malick’s visual lyricism, his film is photographed by cinematographer Matthew Chuang in a way that is nature-based and gorgeously wispy. From a visual storytelling perspective, Stolveski knows exactly how to let the imagery do the talking, and it’s impressive to watch.j

Looking feral but just inexperienced and curious as Nevena, Sara Klimonska does a lot of the heavy lifting here (and her only spoken words are through whispery voice-over). Naomi Rapace pops up for a section of the film as the subservient, recently pregnant Bosilka, and she sells the illusion that it’s actually Nevena in Bosilka’s body, acting childlike and awestruck at new sensations. Alice Englert (daughter of director Jane Campion) finally ends the cycle as Biliana, a young woman who has everything taken from her.

Beginning as the cruelest, grimmest of fairy tales, “You Won’t Be Alone” evolves into so much more. As highfalutin as it might sound on paper, this is a cyclical journey of the human experience, subtle in its aims and shattering upon closer consideration, but also oddly life-affirming. It’s the circle of life, witch.