Walking into the Forrest Theatre, patrons are assaulted by the glaringly-bright light of the stage. This production of Oklahoma!, the lights seem to say, will hide nothing. In many ways, Daniel Fish’s revival lives up to this promise. There are no clever set changes, the orchestra is upstage center, and for much of the production, the lighting remains consistently and steadily bright. When the lights go down, audiences are paradoxically brought more intimately into the characters’ psyches with the use of night-vision cameras. There are also the parts of American culture that Oklahoma! alludes to but historically omits: gun violence, toxic masculinity, limited class mobility and the looseness with which forceful justice can be weaponized in small communities. These elements all reveal themselves in the two-and-a-half hour musical. 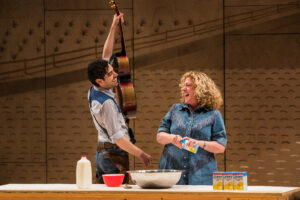 When Fish’s production opened on Broadway in 2019, it was celebrated on twitter as “the Oklahoma! that f*cks” and derided by traditionalists as “Woke-lahoma!” For those open to radical reimagining of theatrical works, the national tour at the Forrest Theatre is an exhilarating experience. Challenging our notions of what to expect at a musical, the company never lets us escape and continually ratchets up the tension until the show’s heart-stopping final minutes. How did we get here, it asks, awash in blood and terrified for what tomorrow may bring?

The touring company is up to the challenge of bringing this ambitious project to life. Sean Grandillo’s Curly has all the charismatic swagger you’d expect, but he also makes it clear that his charms belie a darker, violent edge. Christopher Bannoow’s Jud as a somber loner drew many associations with “incel” culture. In this version of Oklahoma! Jud is a soft-spoken emo dude; we sympathize with him more than we fear him. Sasha Hutchings plays a Laurey that is left without many options. She is clearly smarter than the men who are trying to woo her, but that doesn’t matter much in her social context. We see that while she may be creeped out by Jud, she is also attracted to him on some level. This added layer of sexual curiosity makes the ending of the musical all the more tragic. Tony-nominee Barbara Walsh gives a wonderfully grounded performance as Aunt Eller. Gabrielle Hamilton returns as the featured dancer after originating this track on Broadway in 2019. Her performance was as electric at the Forrest Theatre as it was at Circle-in-the-Square. 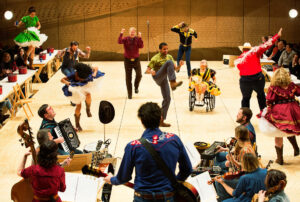 The stand-out of the tour was Sis as Ado Annie. In a dramatically different vocal performance than Tony-winner Ali Stroker, Sis brings a naively girlish fun to the seductive character. While never making Ado Annie the punchline, audiences witness the character enjoy the pleasures of flirtation, lust, and love as she navigates her comedic subplot.

I had the opportunity to see Fish’s Oklahoma! on closing night on Broadway. Closing night shows are tricky; they can be more victory lap than productions. I left feeling grateful to have seen the show at all, but left feeling like I had missed the true essence of what this Oklahoma! was trying to accomplish. The production, restaged for larger proscenium theaters, had a greater narrative focus and tension than I had seen before. My friend who came with me had no reference point for this Oklahoma! or any that came before and walked away a big fan.