At the outset of Wonder Woman 1984, we are treated to an exciting action sequence upon which the themes of the subsequent movie are writ large. In it, we find adolescent Diana Prince (Lilly Aspell), somewhere between the very beginning of the first Wonder Woman movie and rest the of the first Wonder Woman movie, as she partakes in a massive physical contest against other Amazonians. Think The Eliminator at the end of American Gladiators (Amazonian Gladiators?), but pump it up in size and brand it with the unmistakable look of Themyscira.

Little Diana is excited to prove herself, but is warned that this contest, presumably the ultimate test of physical skill for an Amazonian, has bested even the greatest warriors. This does not slow Diana one bit, and almost immediately upon starting the event, she takes a commanding lead over her adult competitors. One small misstep, however, robs her of said lead and leaves her without the tools to complete the contest, and now she must take a shortcut to reach the finish line in time. The thing is…

THERE ARE NO SHORTCUTS IN LIFE, DIANA! AND THAT GOES FOR YOU AT HOME AS WELL!!

But hey, when did superhero movies have to be subtle?

Never, and the lack of thematic subtlety for the next 2.5 hours ends up being one of Wonder Woman 1984’s greatest strengths. It should also be noted that had the entire movie just been an extension of the opening contest, with Amazonians climbing, riding, and bow & arrowing their way through increasingly treacherous obstacles, I’d be game. It kicks ass.

Fast forward to 1984, and we find Diana (Gal Gadot) working at the Smithsonian. As a woman unstuck from time and still mourning the loss of her beau, Steve “Both of my names are first names” Trevor, it’s only outwardly that Diana’s life seems gilded. Inside, she’s a bit of a mess, and since this is the ‘80s, long before Wonder Woman becomes known to the world through the events of BvS/Justice League, she’s still living the secret life of a classic superhero, stepping in here and there to save the day, but disappearing before proper credit can be paid. 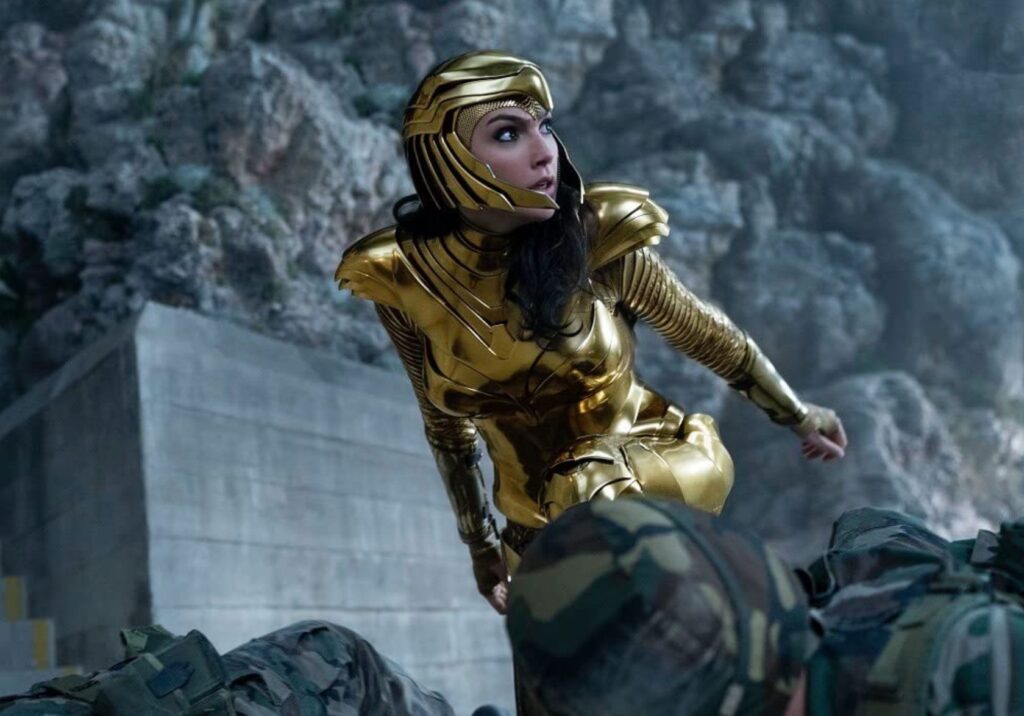 Placing this film in 1984 is a smart move for continuity as well as character work, and despite the title card, made to look like it exists on an arcade screen, the setting is not employed to trigger nostalgia. In fact, outside of the costumes and the occasional soundtrack choice, it’s easy to forget that WW84 isn’t set in the present day. When Steve Trevor (Chris Pine) magically makes his way back into the story from beyond the grave (not a spoiler, he’s second-billed up top and in every trailer) his wonderment with the “future tech” of the 1980s is a wonderful touch. His reaction to the existence of escalators is about the most charming thing I’ve seen on screen all year.

At the Smithsonian we find one of Diana’s coworkers, the meek, pathetic Barbara Minerva (Kristen Wiig), whose specialty is gemology. She’s a forgettable type, one whom the world at large is happy to step all over, but when her job puts a magical, wish-granting gem in her path, she can’t help but to take advantage of its powers. Neither can conman/oil magnate Maxwell Lord (a positively unhinged Pedro Pascal), whose greed far outweighs his bank account.

The thing about magical wishes is that they are nothing but a shortcut. And what did we just learn about shortcuts???

This is an extremely high-concept story, but one of the beautiful things about mucking around in the mythology of superheroes (especially one which is so…mythological) is that you can afford to take big swings while still keeping it grounded in a place of “reality.” It’s also a lot of story, like a lot a lot, and for the most part the film utilizes its excessive runtime. I could cut about 10 minutes from it in total, but not in any one spot. Just a few shaves here and there, and also a reworking of the final action sequence.

The sequence in question, which I will call “Rum Tum Tugger vs Goldar” looks absolutely terrible. It’s another high-concept battle, but it takes place in the bland gray of faux-night, and is rendered so poorly that it feels like it’s from an entirely different film (up until this point, WW84 is GORGEOUS). It’s easy to forgive since an artificially darkened fight sequence that looks like shit is pretty much a standard within the superhero genre anymore, but preceded by a film with a rich color scheme and cleanly shot action, it’s quite disappointing. I’d be surprised to find out that it wasn’t created long before the rest of the film was even conceptualized. Still, it’s hard to complain with a cast this good and a story this touching (Chris Pine, at one point, made me cry — Gal Gadot did so at two points).

There are a few elements of fan service, all of which are handled wonderfully (ha). One aspect of classic Wonder Woman lore is invoked in a way that I still can’t believe. I won’t spoil it, but it’s perhaps the goofiest part of our heroine’s mythology, but employed here it makes perfect sense, and opens up one of the most charming scenes in the movie which, in turn, fuels the thematic material for the remainder of it.

And at the end of the day, it’s the thematic material that sticks most. Wonder Woman 1984 is about doing the work. It’s about avoiding shortcuts and earning a steady foundation upon which to build your success. It’s about self-sacrifice, the dissolution of ego, and the requirement for the haves to help out the have nots. Boldly, it’s also about not using a lack of privilege as an excuse to be a dick. It’s also a film that doesn’t judge its villains, instead motivating them properly and giving them a chance to grow. It’s exactly what I needed during this atypical holiday season (double feature this with Soul if you want to have your heart warmed this Christmas).

Also, at no point is there a glowing rock at the top of a tall set-piece that our heroes and villains are racing to obtain. Not once. This feels new.