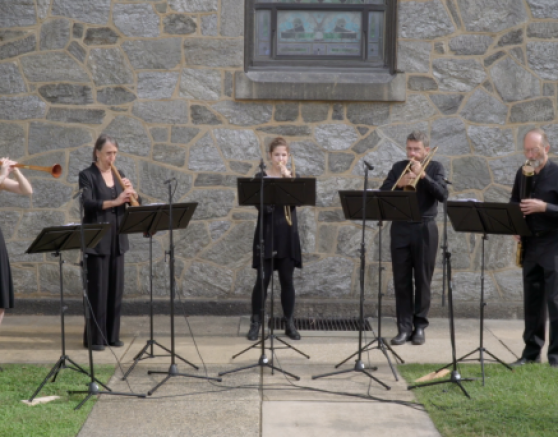 Like other arts organizations, Piffaro has been forced to stream concerts rather than play to a live audience, but there were some features of their debut of the 2020-2021 season that offered advantages a live concert would never have afforded.

The Piffaro team decided to take advantage of the rare original 26 bells were first played in 1901 on Easter Sunday. The tower now has 47 bells, which are played manually by hitting a baton connected to a giant clapper that strikes the bell. This is heavy work, but Janet Tebbel, an internationally renowned carilloneur, plays barehanded where less intrepid players wear gloves with a rubber lining.  Videographer Sharon Torello has filmed Ms. Tebbel’s performance for the concert and to see her hands and feet moving so quickly to create what sounds like a full orchestra of sounds is a fascinating and exciting musical experience.

Artistic co-directors Joan Kimball and Bob Wiemken chose a program based on a blind carilloneur and composer named Jacob van Eyck (c.1589-1657). Van Eyck was a master of the recorder and frequently played in church courtyards, attracting large crowds who listened to him play popular tunes and improvised variations, increasing in speed and harmonic daring with each one. Priscilla Herreid’s puckish playing was superb tribute to van Eyck as she defied all laws of speed and difficulty with delicate phrasing and outstandingly clear articulation.

The ensemble played in the beautiful courtyard of the St. Vincents Seminary, having been given permission to record in this private and pristine garden of the priests’ private residence. Not that it could have been very quiet, as Sharon Torello’s drone footage showed the ever present streams of traffic zipping through the Germantown thoroughfares. Audio Engineer John Baker of Affetto Recordings in Princeton, NJ, produced a beautiful soundscape for all of the music and somehow eliminated all traffic noise – no easy feat.

Another outstanding experience for me was to watch the video footage of the two Renaissance straight trumpets played by Piffaro member Erik Schmalz and guest musician Liza Malamut.  The straight trumpet is a long cylinder with no valves, so playing it means making every note with your breath and lips while holding a cylinder longer than most people’s height.  Seeing Ms. Torello’s close-ups let the audience have a detailed view of the playing that would not have been possible in a crowded church.

The video, which also presents solo lute, a sackbut duo, a dulcian trio, and recorder quartets in the courtyard with its flowers, trees, and pond full of goldfish was both a visual and musical treat.

This concert will be available as an on-demand video until November 5, 2020. Tickets and information can be found at Piffaro.org.