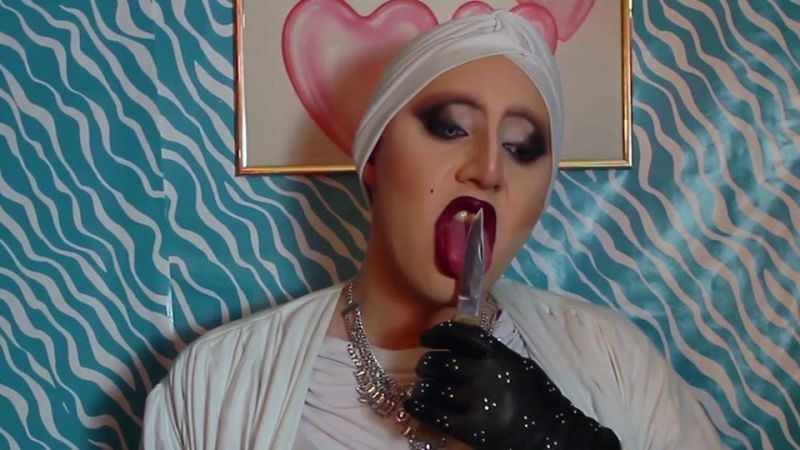 As the world of drag grows increasingly mainstream in the wake of RuPaul’s Drago Race and its complete takeover of VH1’s programming schedule, it’s only right that this formerly underground world be given a chance to reclaim its inherent subversiveness. How lucky are we that the method through which this occurs is a hardcore, grindhouse-flavored slasher comedy? Taking the shiny, candy-colored world of drag, mixing it with Providence’s vibrant gay community, and then drenching it with gallons of blood is pretty much a perfect recipe for cinematic kicks.

After an acrimonious breakup, Providence ex-pat Dwayne (Wayne Gonsalves) finds himself staying with his friend Brian (Christopher Dalpe – HILARIOUS) and slinging drinks at an old haunt. As he works to pick himself back up and navigate a dating scene newly fueled by the app “Poundr,” things are thrown into disarray by a masked killer who is draining young gay men of their blood in a comically gruesome fashion. Let’s just say that glory hole patrons will likely think twice before future anonymous insertions…

While the film clearly has a small budget, it’s quite impressive how much genuine grindhouse flair the filmmakers are able to employ to lift the visual profile of the film. Neon lighting, witchy musical montages, and clever framing/editing pay tribute to the style we see in the thrillers of the Hollywood-adjacent ‘70s, as well as the Giallo films of the era which helped pave the way for a lot of modern queer genre fare.

By being fully aware of its budgetary limitations, the filmmakers are able to move beyond it as a hindrance in a wealth of creative ways. Sure, at points you can see the seams, but the trick is that the seams are made not to matter by the rest of what fills the screen. It’s really cool to see an underground slasher film that feels distinctly underground, while also being a proudly gay tale. Even when it dips into small bits of absurdity that toe the line between stylish and gaudy, it all feels too exciting and new to hit with any harsh criticisms. Simply put, it’s awesome to see a film that exists ostensibly by sheer force of creative will from a population that is still leaping hurdles to succeed in the industry. Also, Audrey Heartburn is one of the best drag names I have ever heard.