Philadelphians who are concerned about getting COVID-19 if they attend a large gathering of can relax AND see a live show that avoids mingling with other people. At The Way Out, part of the 2020 Philadelphia Fringe Festival, audiences can experience performances by a wide range of cutting edge artists, Thursday October 1 through Saturday October 3.

The Way Out presents an immersive, 100% socially distanced drive-through performance through some of the 78 acres at the Laurel Hill Cemetery. Audiences witness six different shows while driving by car, bicycle, or tandem along the gently winding roads of the old cemetery. On the way, they will have the opportunity to see dancers, a live flame-working artist, and kinetic sculptures. They will also experience live music and observe aerial artists performing high up over the cemetery. 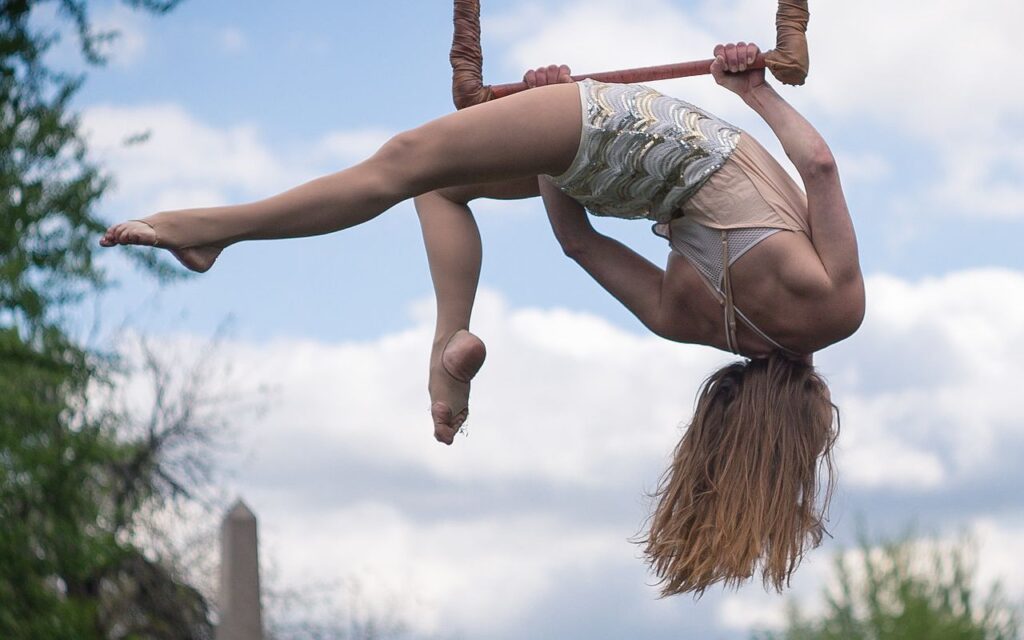 Tangle Movement Arts, a contemporary circus arts company since 2011 and a regular Fringe participant, presents a combination of traditional circus-like trapeze, lyra, and aerial silks where performers and acrobats hang from a fabric—accompanied by live music to tell a multi-dimensional story.

“Tangle’s work places an emphasis on queer and female experiences, and is devised collaboratively by its all-female ensemble,” according to Lauren Rile Smith.

Describing the evolution of Tangle, she said: “Out of excitement for a radical potential circus, I founded Tangle as a queer, all-female circus company to question our assumptions on gender, bodies, and the way people relate to one another. We believe that the real world’s politics show up in circus acts, and we want our performances to be part of creating the world we want to see.

She observed Tangle’s spectators as “those who are dazzled by the physicality of circus arts,” and audiences which “seriously explore relationships between women—from the platonic to the passionate.” Transparency and honesty, two of the hallmarks of Tangle, led to these observations of the performers who “display a wide range of body types, gender presentations, and interactions—relationships of support, antagonism, flirtation, or partnership.”

For this performance at the Laurel Hill Cemetery, Lauren Rile Smith is not acting as a performer because this complex outside show requires her to be on the ground as a producer throughout.

Tangle’s aerial dance closes The Way Out with a moving and thought-provoking finale.

Interview with The Way Out artists.

Because of the COVID precautionary measures, only a few people are allowed in, leading to a very limited number of tickets—all of which are only sold in advance, making for a contact-free box office experience. Call 215-266-6215 for tickets. Upon arrival, audience members who already paid for their tickets will be checked in via the same telephone number.

Throughout the entire performance, audiences will stay in their vehicles. There is no restroom access on site. Contact info@tangle-arts.com or call 215-266-6215 with questions.