Can the performing arts survive a pandemic? Ninth Planet’s answer is a resounding yes. The small experimental performance company, run by Nia Benjamin, Sam Tower and Franny Mestrich, has been working hard to reimagine the ways they build community through performance.

As performance makers, Ninth Planet’s work has relied heavily on sharing space with other artists and community members. Their live shows brought people into very close proximity with each other. Sometimes that meant a baby crawling into a performer’s lap or two actors sharing a love scene in a crowded immersive performance environment.

“How do we reconnect with the world through our art, that’s the central question we’ve asked ourselves over these last four months,” says co-artistic director Sam Tower. From thwarted premiere productions, cancelled travel to an international festival, and a pause on new creative projects, the company wasn’t sure there would be a way forward for them.

“We needed to prioritize safety, accessibility, community, while still offering opportunities for people to create and play,” says artistic associate Franny Mestrich. “We’ve reimagined our entire season to be available from the safety of home, without much time or money.”

“We’re a really small organization with big dreams,” says co-artistic director Nia Benjamin. “We have so many plans, but not much support. Our annual budget comes in under $50K,” they add, “we’re always trying to do A LOT with a little.”

“Against stacked odds, we have stayed committed to our people-first approach to making art” adds Sam “When the world provides obstacles, independent producing artists will always invent solutions that allow us to continue making art — in the safest, most accessible and collaborative ways we can.” she says.

They have just released two major new projects designed to inspire joy and connection in young people and families. Both projects can be enjoyed from the safety of home, inviting anyone and everyone to tap into their own creativity. Ninth Planet will be actively engaging with local families and youth but participation won’t be limited to Philadelphians. Because both of these projects are available to anyone online, they have the potential to engage audiences on a national scale. Here’s what the company has planned:

PLAY PACKAGE FOR FAMILIES WITH BABIES

Ninth Planet is creating opportunities for imaginative play at home with their Play Package for Families with Babies. The package includes: Baby Beats, a soundtrack of electronic music; a Crafty Activity Book for families; and a deck of 27 playing cards. With quick-draw prompts, these cards invite parents and caregivers to use their imaginations in new ways, create playful crafts, and try fun dance moves with their baby, all while learning about the fundamentals of early childhood development.

After play testing with families, the Digital Play Package is now available online and accessible to anyone. Pre-orders are open for anyone who would like to purchase a printed Play Deck of 27 cards for $30 until August 10th. Ninth Planet has also begun an initiative to provide 300 free printed Play Decks to families across Philadelphia. They have partnered with organizations and mutual aid efforts to connect free printed Play Decks with families of color, and queer and trans* parents/caregivers. Fireball Printing has sponsored this effort with discounted printing. 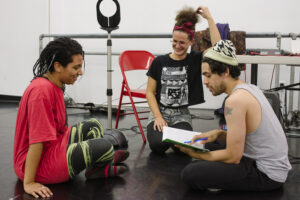 Ninth Planet is adapting their play for young adult audiences into a community-sourced film to be released in November. Honey Honey is the brainchild of fifteen lead collaborators and ten young artists from workshops at The Attic Youth Center. It’s a coming of age story about Batty Boo, Red Ruby Girl, and Speedster Princess, three young queer folks growing up together –– leaving home, finding and losing love, and coming into themselves. The company will be releasing the script online publicly, posting casting calls, and taking video submissions from anyone who’s interested in contributing. Their editing team, led by Co-Artistic Director Nia Benjamin, will collage the submissions from the public into one cohesive movie. In addition to community members, the film will feature actor/creators Jackie Soro, Paloma Irizarry and Emily Johnson, with music from Anthony Martinez-Briggs, Kira Rodriguez, Jacqueline Constance and Rachel Sumi Ishikawa, directed by Nia Benjamin and Sam Tower.