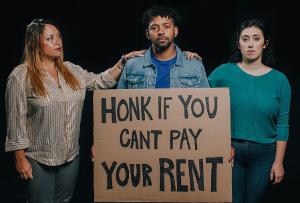 MinorityLand, currently on stage at Theatre Horizon in Norristown is a remount of the 2013 play by Power Street Theatre that originally premiered in North Philadelphia as part of the Fringe Festival.

It was the first play that Erlina Ortiz, then 22, ever wrote; “I didn’t even call myself a playwright yet,” she writes in the program notes. According to Power Street’s website, when it premiered, “the audiences were as diverse as you can imagine – age, race, sex, educational experience…and their conversations reflected the exhilaration of hearing Spanish on stage – seeing characters that reminded them of their own friends and family.” I couldn’t help reflect how different the experience of watching and performing the play must have been at Theatre Horizon, to the mostly white-passing, middle-aged crowd of season-ticket holders. The crowd was not seeing their stories told, but rather being taught about an issue. In this context, Minorityland succeeds as an educational experience to teach audiences about the realities of gentrifying neighborhoods historically occupied by working-class people of color. While it manages to portray gentrification and its accompanying evils in their complexity, the same cannot be said for the characters that inhabit the fictional Hope Street.

The play centers around the 2009 home of Mama Julia (Gabriela Sanchez), which serves as a second home for her sibling-neighbors Deborah (Anjoli Santiago) and Otis (Freddy Amill). Mama Julia has taken care of (and fed) the pair since they were children and Sanchez exudes maternal warmth. Their houses are near an unnamed university, and real estate giant Stevens and Sons is acquiring devalued property left and right. This has caused an influx of college-going (white-passing) residents, raised rents, and increased property taxes. To stay afloat, Mama Julia has decided to rent out rooms to two college kids: future doctor Amelia (Emily Fernandez) and poet Saxon (Thomas Choinacky).

From there, the house turns into a microcosm of the complex forces that are shaping (and changing) areas like “University City” (formerly the Black Bottom) neighborhood of West Philadelphia, and “Temple Town” in the Cecil B. Moore area of North Philadelphia. Some characters rage against the change, some are grateful, and some are just trying to hold on to their lives. Because of the play’s tight focus on gentrification, the characters often become flattened by the weight of their point of view. They often speak to each other as if they are presenting to an assembly: “Gentrification! You know what that means? It’s a fancy word for…” One leaves the play not knowing much about these character’s hopes and dreams other than how they feel about the big G. Of the company, Amill creates the most fully realized portrayal of a young man learning where and how to point his rage at injustice that he sees everywhere. Similarly, the plot seems either to be an engine to discuss the issues mentioned above or veers toward melodrama. There are a few moments in the second act, where the characters get a chance to speak to each other as people (not symbols); when this happens, the work is genuinely affecting.

Since 2009 (or 2013), the need for a region-wide reckoning with gentrification has only increased. Organizations like Stadium Stompers have sprung up out of a need to protect communities against the powerful forces of developers and universities. For those who need a comprehensive overview of how gentrification functions through corporate greed and neighborhood displacement, MinorityLand provides it. As Power Street continues to make new work, I am hopeful that their characters will grow to reflect the complexity of the neighborhoods they are bringing to life.