Long before seeing the film, I began referring to Ad Astra as Astro Dad, because that’s funny to me and I like to have fun. Now, having seen the film, my cheesy joke has taken on a new resonance. While I cannot tell you what the phrase Ad Astra means, I can tell you that Astro Dad would also be an appropriate title for this film. As such, I will be referring to it as Astro Dad henceforth, and you will just have to get on my level.

Brad Pitt plays Major Roy McBride, son of legendary astronaut Clifford McBride (Tommy Lee Jones). Roy is beloved by everyone in the industry, partially on account of his father’s notoriety, but also because he is a respected astronaut in his own right. In the future depicted here, where commercial flights to the moon are as commonplace as air travel (commercial flights to Mars slightly less so), “astronaut” is a term that can be applied to the common man. But Roy is different from the common man, in that his desire to see the stars fuels his every move. He is obsessed with it, and he will do just about anything to get himself into the sky. Where the film begins, he’s performing repairs on a giant antenna in Earth’s atmosphere, which is used to broadcast to the far reaches of space. A sudden power surge results in a series of explosions which send Roy falling back to Earth (with a parachute, don’t worry).

He survives, of course, but his superiors see fit to send him on yet another mission, ostensibly on account of the fact that Roy is one cool customer. Even as he hurtled through Earth’s atmosphere, his heart rate never exceeded 80 BPM. In fact, it never does. One could charitably call Roy stoic. One could more accurately call Roy detached. 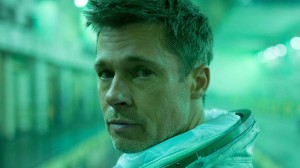 The mission is simple-ish. Earth has been falling victim to an increasing number of these dangerous power surges, and the top brass at the space force (I do not remember if the name NASA was invoked) attributes these surges to what they believe is an issue with anti-matter. It’s a lot of technical mumbo-jumbo, but Astro Dad handles it well. The gist is this: Roy’s father was sent on a mission to the far reaches of space decades prior. After passing Neptune, where his team hoped to use some sort of anti-matter generator to crack a communication line to countless theoretical parallel galaxies, the ship fell off the map. No one has heard from them since. Space management has good reason to believe that the surges which threaten Earth’s safety may be a symptom of a larger issue that could threaten the entirety of existence. They also believe that the source of this trouble is the missing ship’s anti-matter thingy, and that Roy’s father may still be alive and behind the controls.

Roy’s job is to travel to Mars, where he will be able to effectively send a message to his father, begging him to stop whatever he’s doing, and maybe even try to come home.

What follows is a very straightforward adventure. A man-on-a-mission actioner with an introspective third act to bring it all home. The narrative is perfectly linear and paced like a rocket engine. No time is wasted on exposition (and look above — there’s tons of it), with Astro Dad instead thrusting us into a fully realized world. The foreword indicates that this all takes place in the “near future,” but in terms of existence, in which a million years is but a blip on the chronology of ALL THINGS, that term could mean anything. All I know is that in Astro Dad, the moon is colonized to the point where it has an Applebee’s, DHL Delivery Services, and even a show called Moon’s Got Talent. The dark side of the moon is an area with contested mining regions, complete with space pirates and Mad Max-ian lunar rover chases. It’s pretty nuts.

People looking for Interstellar will likely come up wanting. In typical James Gray fashion, this isn’t a film too interested in the surreal. Despite taking place in a series of fictional settings, this is a workmanlike adventure story that is less about maximizing the use of setting to explore big, expansive ideas, and more about using excitement and stunning imagery to give life to what could have been a more turgid character piece. And for those of us who fall prey easily to stories about father/son relationships, well, get ready to feel. 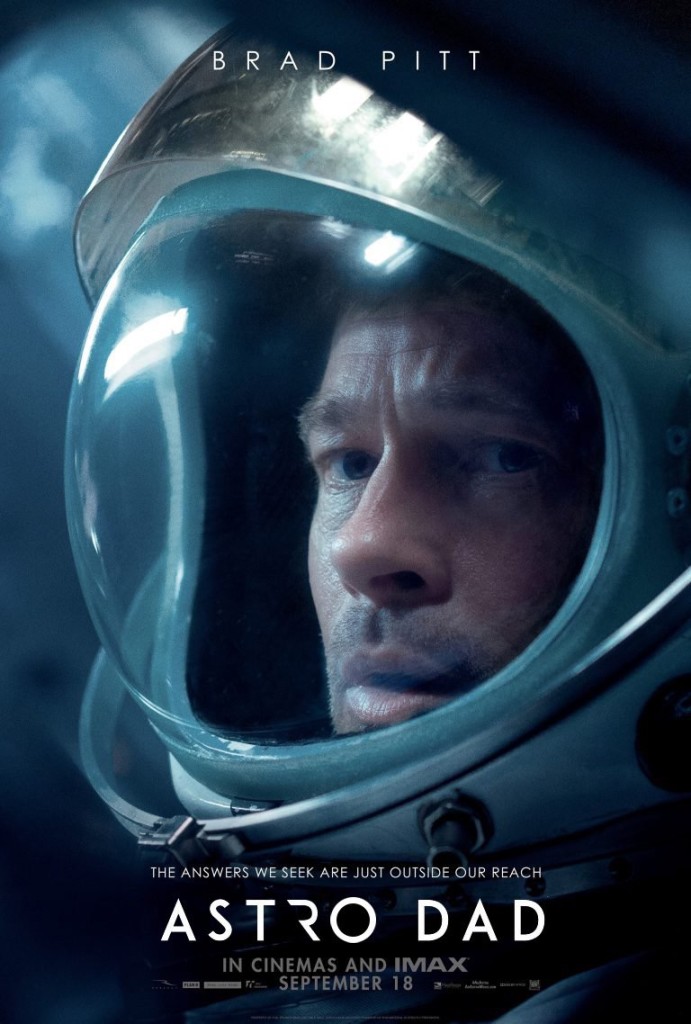 Both Pitt and Jones do wonderful work in creating a true to life father/son dynamic, despite the fact that they are on opposite ends of the solar system. The exploration of what it means to “become your parents” works because their relationship works. Pitt gives a reserved performance that, as you retroactively assess his character’s actions, becomes equal parts compelling and frustrating. I mean this as a very high compliment.

Hats off to Ruth Negga, whose small role in just a handful of scenes says more about the self-destructive state of humanity than a mile of script pages ever could.

Visually, Astro Dad is remarkable. Hoyte Van Hoytema, the cinematographer behind Interstellar, Dunkirk, Her, and a million other gorgeous movies, shot this with a variety of different tones. From the crisp, weightless structures that dominate space, to the grimy, sandy hallways of a Mars base, to the silent desert of the dark side of the moon, every shot transports the viewer to the selected location. So many space movies fail to give the audience the feeling of literal space, but Van Hoytema makes outer space as vast, scary, and as wondrous as it should be…and it’s only one of a handful of very different tones the film’s visual palette takes, each of which are layered on top of this sturdy motif.

I have some thoughts about the final act which I will not explore here for fear of spoilers, but I can say that my initial misgivings with it have faded in the days since the movie came to an end. When I revisited earlier scenes in my mind with the knowledge of later story developments, it became clear that Astro Dad is the type of film that will undoubtedly grow with future viewings. Viewings that, given the film’s exciting, adventurous nature, I look forward to having, even if just for pure entertainment value.

If there’s one thing you should take away from this review, however, its that there’s a mid-movie sequence which ranks among the best “whaaaaat the hell is going on?!?” moments in all of film history. I mean that.

Released nationwide September 20, 2019, and at the PFS Roxy, The Pearl, and other cinemas in Philadelphia. filmadelphia.org/roxy-theater