Mary Martello is scaring up some fun-and foals in Walnut Street Theatre’s Young Frankenstein. No stranger to the WST stage, Martello has appeared in over 30 productions. This time around, she is starring as Frau Blucher in the hilarious hit based on the Mel Brook’s movie. Blucher is a mysterious character whose name has a strange effect in horses. 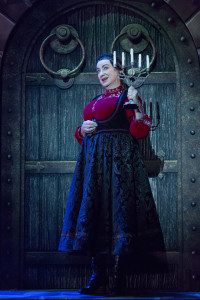 Debra Danese: You started performing at the age of 7. What was your first show?

Mary Martello: My first professional appearance was for the Oldsmobile Christmas Spectacular in 1960. I sang a duet with Florence Henderson called “Be Kind to Your Parents.”  The show was emceed by Johnny Carson, who was soon to take over The Tonight Show.

DD: Is that when you knew you had the theatre bug?

MM: My first play was The Innocents a year later. I planned to become an English teacher when I grew up, according to the bio I wrote for the program. When I learned you couldn’t get a degree in diagramming sentences, I gave up that idea and kept performing.

DD: How would you best describe your character, Frau Blucher?

MM: A passionate woman with a complicated past with men and horses.

DD: You have been in over 30 Walnut Street Theatre productions. What have been some of your favorite roles there?

MM: There are many, but some of my favorites include: Hesione in The Triumph of Love; Sheila Kelly, who is one of the villains in Annie Warbucks; Muriel in Dirty Rotten Scoundrels; Golda in Fiddler on the Roof; Vida Louise in Harvey; Roz in Nine to Five; Mama Calhoun in Memphis; Mother Superior in Sister Act; Dottie in Noises Off; Miss Hannigan in Annie and very possibly, Frau Blucher.

DD: What’s your favorite line from the show?

DD: Where do you go in Philly to unwind after a show?

MM: I usually go home to unwind, but I’ve been known to join the cast for drinks at La Buca, Craftsman Row, or karaoke at Day N Nite.