The Walnut Street Theater production in April was a musical performance of The Curious Incident of the Dog in the Night-time, a the fictional autobiography of Christopher Boone based on the novel by Mark Haddon. Here are my thoughts, illustrated by Yumna Tolaimate and Charles Schultz and kindly edited by Zlatan Gruborovic.

A dog dies. Christopher Boone, played by Austin Nedrow, starts to investigate outside of his comfort zone. Christopher’s identification of strangers, friends, or family situates the irrational handicapped person against the rational-minded person. Further more, human beings are irrational beings. The real-life married actors, Ian Merrill Peakes and Karen Peakes show on-stage the discrepancy between the mother’s and father’s decisions, and this re-situates Christopher’s inner voice. It is another voice, another stranger, and another fear. The absent mother and fickle father introduce a constant fear of truth or fear of conspiracy. The Walnut Street Theater production envisioned strangers, voices, and ethics through a few minor roles played by Sarah Gliko, Susan Riley Stevens, Dan Hodge, Justin Lujan, and Greg Wood. We are all Christopher on one level or another. 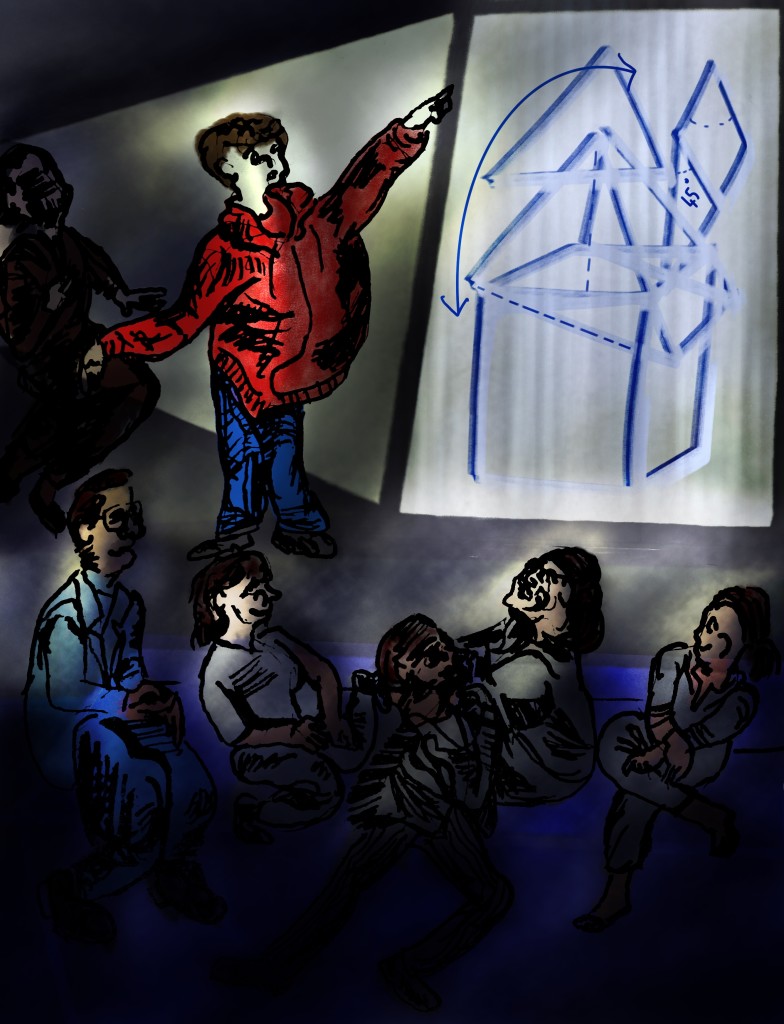 It all seems very curious: As a dog dies; the child with a form of Asperger’s syndrome investigates its death. As the play proceeds, he learns to navigate his world and the stories he has been told about his life. In life, anything we have experienced could be explained as a curious incident. Yet, this seemingly mundane title also can be seen as a reference to a typical title in the series of novels about Sherlock Holmes. Moreover it can be interpreted as delivering a less investigational and a rather poetic line problematising the position of a person never to be understand. The emptiness that surrounds such a person is intriguing, but also frustrating because it defines the lack of understanding for the mentally disabled person

The elaborate set design by Roman Tatarowics for The Curious Incident Of The Dog In The Night-Time reminds one of the set for “Who Wants To Be A Millionaire”. The physical construction of the stage represents perhaps the mind separated from reality, namely it portrays the separation of the outer world as it is perceived and speculatively portrayed on the inner canvas of the brain. That is precisely what an autistic author of this play, who is also its main character, Christopher Boone, in a seemingly undramatic play attempts to convey. The seemingly chaotic communication of a person with Asperger’s is his or hers only way to relate to the world which is here re-imagined through the form of a play.

And here again, in the set design a spot-light on the center of the stage minimally makes the surroundings devoid of emotion. Set in a neighborhood which is mapped out on a screen that translated Christopher’s thoughts more directly, if one turns to the quote from the book which follows:

Such complexity of the book transcribes the inner screen of an autistic mind on stage visually and anchors it in a virtual prism. While the cast’s motions, voices, and shadows reappear behind the screen. They form a pattern surrounding Christopher’s brain with fears and and eventually — fate. One could say that Christopher is doomed to sustained abuse from others for not leaving space in his brain for normal social encounters. But is that state necessarily bad? As his brain works differently than others’ he must face a clouded judgement when it comes to other people. The unknown which comes with such perception shows a fatal clash between the desire for the absolute truth and somewhat romantic yearning for the company of a kindled spirit. 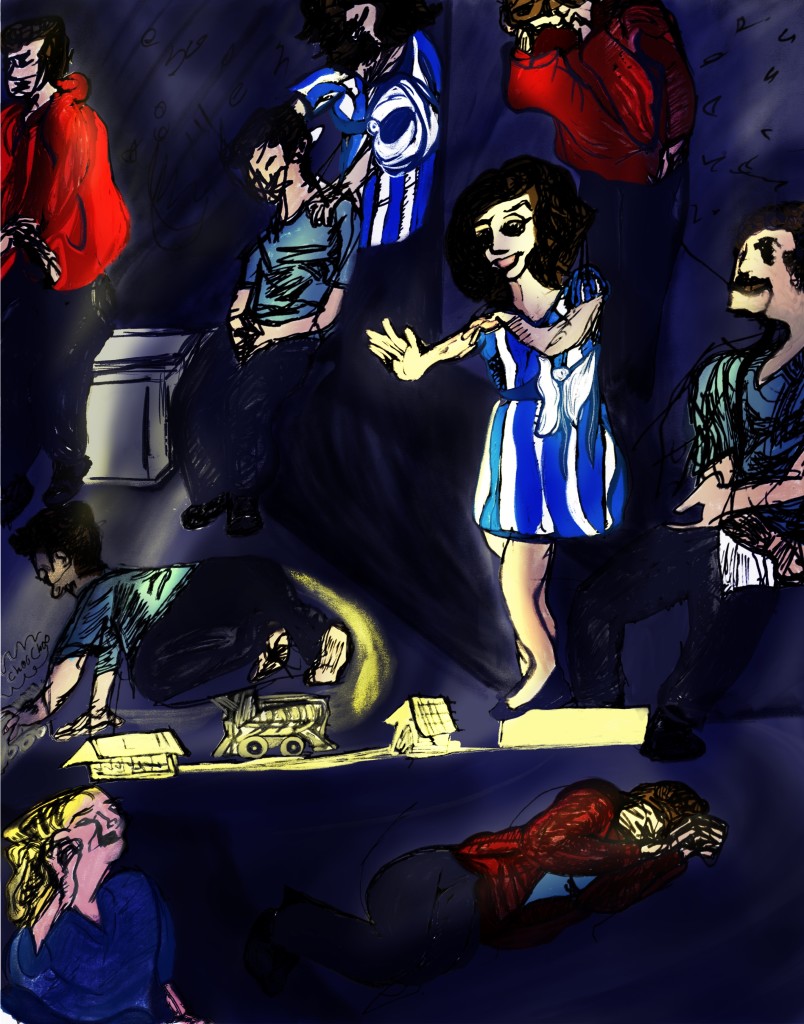 One might look for a more understanding communication in the letter from Christopher’s mother. It reintroduces the detective story which gave Christopher a handle on the symbolic relationships around him. While the mother’s absence is underlined by a letter, the father is more successful in communicating with Christopher, perhaps only to suggest a despicable nature when he lies about the mother’s death. The clue and variable that is missing from our compassion for the character and the play never includes the most important part: the “I” in the story. To this complexity one must add another character of despicable nature, Mr. Shears played by Greg Wood, who further destabilizes the story by running away with Christopher’s mother to London. Through this adultery, the mother removes herself from the equation and finally allows Mr. Shears to bully Christopher in the end. 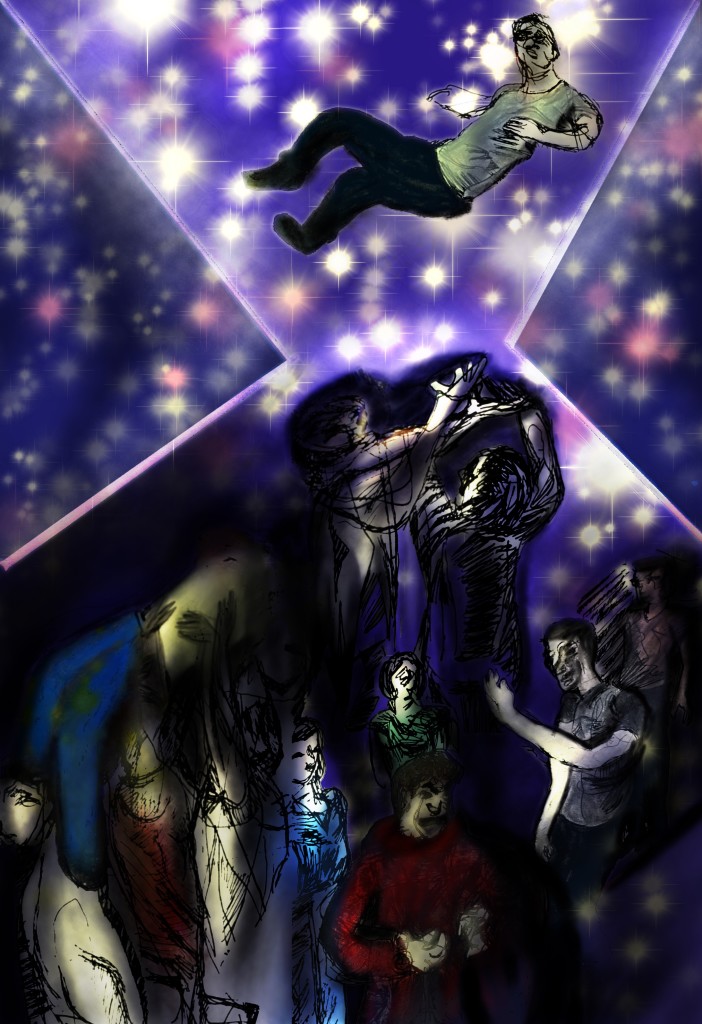 These rather complex developments reduce Christopher’s perception of reality to the dream of becoming an astronaut. The message in his mother’s letters trigger memories of fragmented emotions that he visualizes as red, or yellow and brown This limited color palette determines the character of a day that he lives. Red standing for a super day, and yellow or brown standing as a black day.

Maybe such translations of mis-communicated reality into colors is all that he has left with in reducing his daily events into binary outcomes. Perhaps this is the only, if invisible conception of reality which we share with Christopher; what for him is the color is for us unconscious sensory impulses for what we like and do not like. For Christopher exists in a magically simplified reality, defined by questions such as “what we are doing here”, and “where we’re meant to be going?” Perhaps the construct of factual reality is fully outside of us or him, our or his control: in fact it is concocted by the normative society, the very one that breeds certain types of people and contempt for them. When we feel contempt we remember what it is like to be human, and conversely try to retain a bit of human decency that has been lost in the prisms of representations of reality. Perhaps we are all like the dog mentioned in the beginning of this detective conundrum: all dead and all victims of gentile, deadly familial crime.