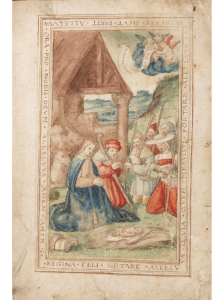 The concert by Piffaro, Les Canards Chantants, and Happenstance Theatre was an imaginative performance inspired by a sixteenth century manuscript owned by the Philadelphia Free Library’s Rare Book Department: the Lewis E 211, a gift from Anne Baker Lewis.

The text is a tiny book of Noels – carols, if you will, with engagingly simple illustrations of shepherds, shepherdesses, and animals. There are many accurately drawn musical instruments as well. Holding this book in my hands was a mystical experience. (The manuscript is from circa 1520.)

Considerable research and imagination went into transforming the manuscript into a concert.  In the program notes, Piffaro warns that the performance is “not a recreation in any sense of the word”, but the reedy sounds of the shawms, and the soothing sackbuts, and dulcians captured the feel of a medieval world and, at least in my imagination, took me to 16th century France.

The experience was enhanced by Mark Jaster and Sabrina Mandell dressed as the shepherds, bearing the banner of the frontispiece which they held over the musicians as the group processed. They looked so much like the paintings in the Noel manuscript that is seemed they had jumped off the page.

The Canards Chantants, a five-voice ensemble, sang lustily in “Noel: Laissez paitre vos betes”. Some patient saint had transcribed and translated the handwritten 16th century French words and Les Canards had memorized this one so that they were able to move, sing, and urge shepherds to leave their flocks to see the newborn babe. The singers were accompanied by the superb sounds of Piffaro’s Renaissance instruments, including a tiny guitar with four pairs of strings which had quite a full sound, keeping up with the nasal sounds of both bagpipes and shawms, which were, in turn rounded out by the smoother recorders, dulcians, and sackbuts.

Priscilla Herreid managed to coax the most ethereal sounds out of the recorder and the dulcian. Grant Herreid moved about quickly with his guitar, lute, drum, and, at one point, joined the singers. Greg Ingles, Joan Kimball, Erik Schmalz, and Bob Wiemken played bagpipe, shawm, recorders, sackbuts, and dulcians in their usual polished style.

The hymn “Creator of the Stars of Night” (Conditor Alte Siderum), copied in Latin script in the Lewis Noel booklet, is a 7th century hymn still sung today. Robin Bier chanted it in her inimitable resonant contralto. In the “Noel: Tant que Vivray”, Ms. Bier’s contralto was beautifully matched by the pure soprano voice of Molly Netter.

The final noel, “Noel Gentil pastoreau”, set to “Ilz sont bien pelles”, a late 15th century chanson, was a jaunty song to the shepherds calling on them to grab their drum and flageolet and sing the news: “naulet nau” (Noel, noel).

Joan Kimball, who conceived the program, and Piffaro deserve much praise for the transcriptions, translations, and carefully worked arrangements. The smooth Renaissance singing style of the Canards Chantants, the pantomiming of the simple shepherds of the book, and the exquisite program notes took the audience as close to the sixteenth century French Noel midnight mass as possible. Noel, noel.