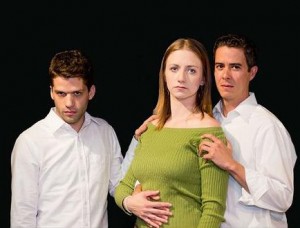 Mia McCullough’s LUCINDA’s BED has a great premise: a monster hiding under a young girl’s bed continues to haunt her into adulthood. The monster (Brendan Whelan) may take the form of an overly aggressive college date, a younger art gallery clerk who tempts infidelity, a plumber who might be sexually present when your husband (Geoff Bruen) isn’t, a post-breakup boy toy. Told in a series of exaggerated vignettes over the course of the life of a woman (Sarah Robinson), LUCINDA’S BED communicates a changing message: at times men are the monsters, at others temptation is the monster. Or is it that expectation for women to do the right thing is the monster? There’s humor and moving emotion in the play, which this production mines well at times. But McCullogh uses broad metaphysical strokes to paint her portrait of the changing temptations and burdens women must fight. Nuanced realism would render better.

Director Christopher King and technical director Matthew Gephart present high production values throughout. Some set changes drag, but the end results are worth the wait as humorous sets demarcate the passage of time. (The teenage Lucinda has a poster for a dreamy boy in a fictional vampire movie, tagline: “He’s sexy, he’s dead, and he’s depressed”.) [Walnut Street Theatre Studio 5] September 18-22, 2013, http://fringearts.ticketleap.com/lucindas-bed.