In SALAMANDER, Elephant Room Productions present a disease that infects the public like an STD. This disease was not talked about, but through a dramatic staged reading the show informed us about a public’s concern for a sudden outbreak. The predator and the victim of sexual assault was referred to on the lines of a sexual transmitted disease. 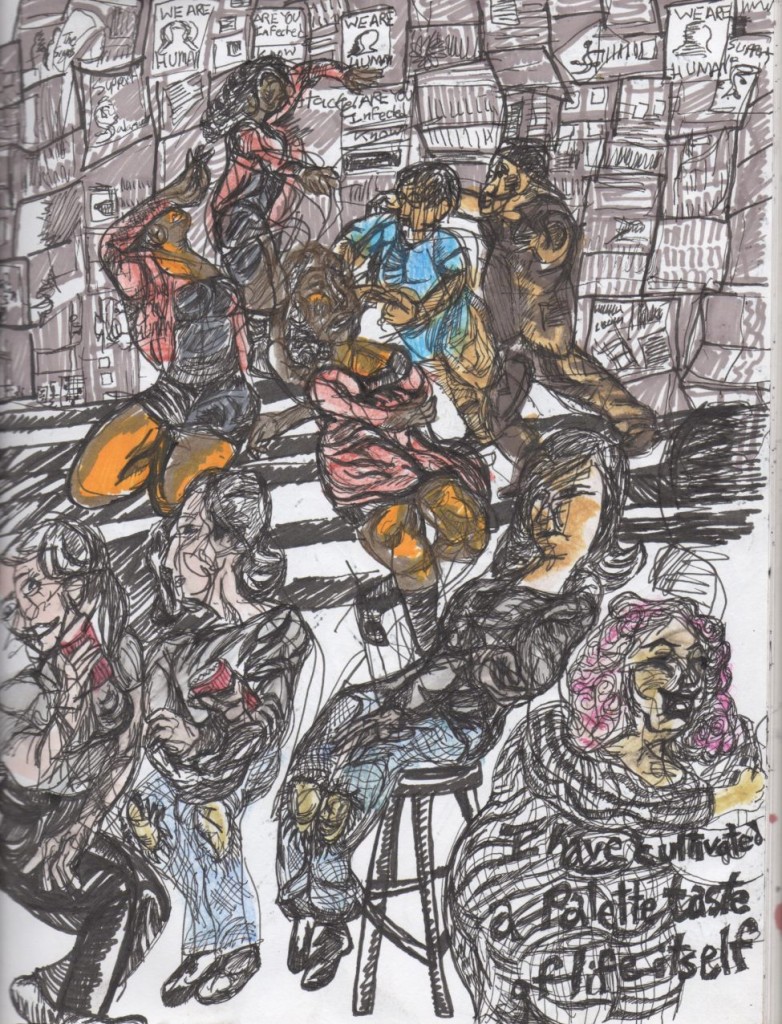 The lights, language, and gesture provided an atmosphere, and it made it black and white how women are pulled through the experience of reliving the rape afterwards. The sexual attack felt like they were nothing, not human, or even more simpler, they had a loss of taste for life. It was a sensory experience of walking down a dark alley, and hearing, seeing, but not believing what was at the end of a tunneling light. With small flashlights the cast zoomed in on the targeted victim or the epicenter of the rape. 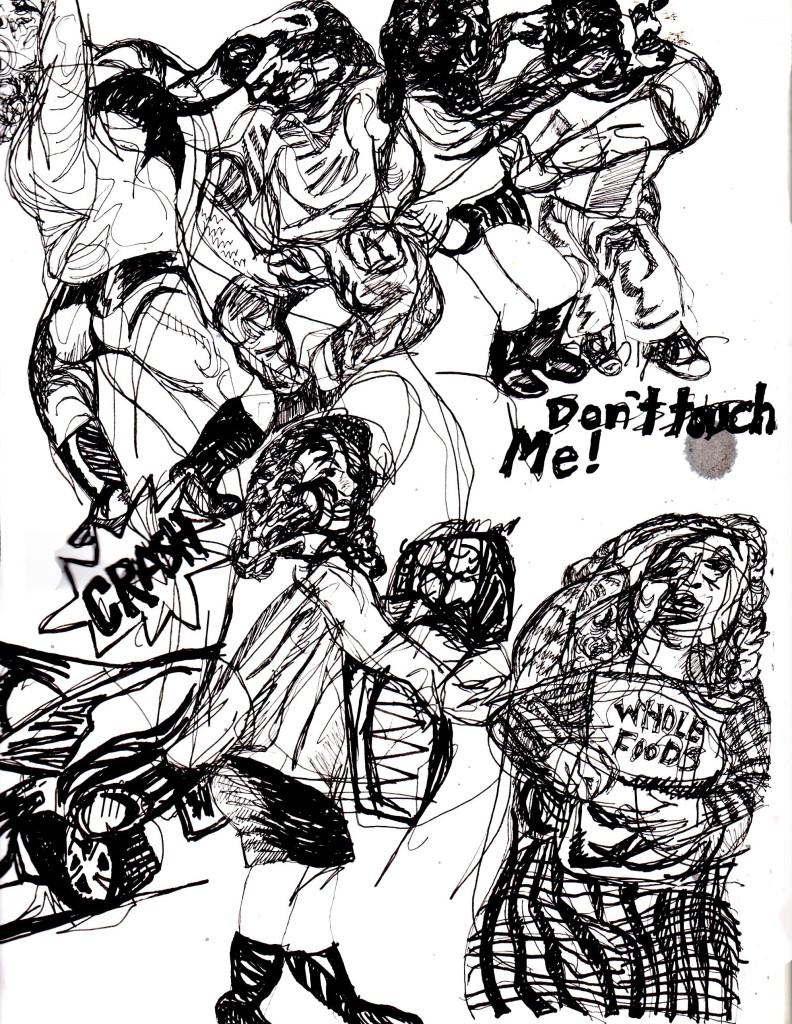 Walking into Plays and Players one of the actors, Zoe Feldman welcomed me with a T-shirt that read, “I am nothing.” The first scene was at a gentleman’s club. A stripper showed how “the Lady”, played by Ronni, is asking for sex by dancing for the enjoyment of arousing male guests. She was making a living as a stripper, aware of the dangerous occupation. She eventually runs into another Woman, played by Ginger Agnew, whom seemed to have lost her mind in her old age. A car crash dramatically weaves together the separate lives of these three women. The dance between a young naive girl, a sex worker, and an older aged wife and mother clearly showed signs of a larger heterocentric society. The frayed image of Agnew as the older Woman portrayed a common flow of undetected victimization as apposed to the 2017 Philadelphia report of over 1100 sexual victims.

A Girl, played by Zoe Feldman, was abused by a predator while walking home from a party. The spot light moved around the stage to shine on the Male, played by Blake Alvey, to enter the mind of the predator, who said, “my family will never know who I really am.” We see the Male and the Girl at a bar, and the Lady and the Woman crash into each other unexpectedly. The strength that comes with sharing similar feelings about the men in their lives empowered them by knowing unhealthy behavior in their relationships with men. 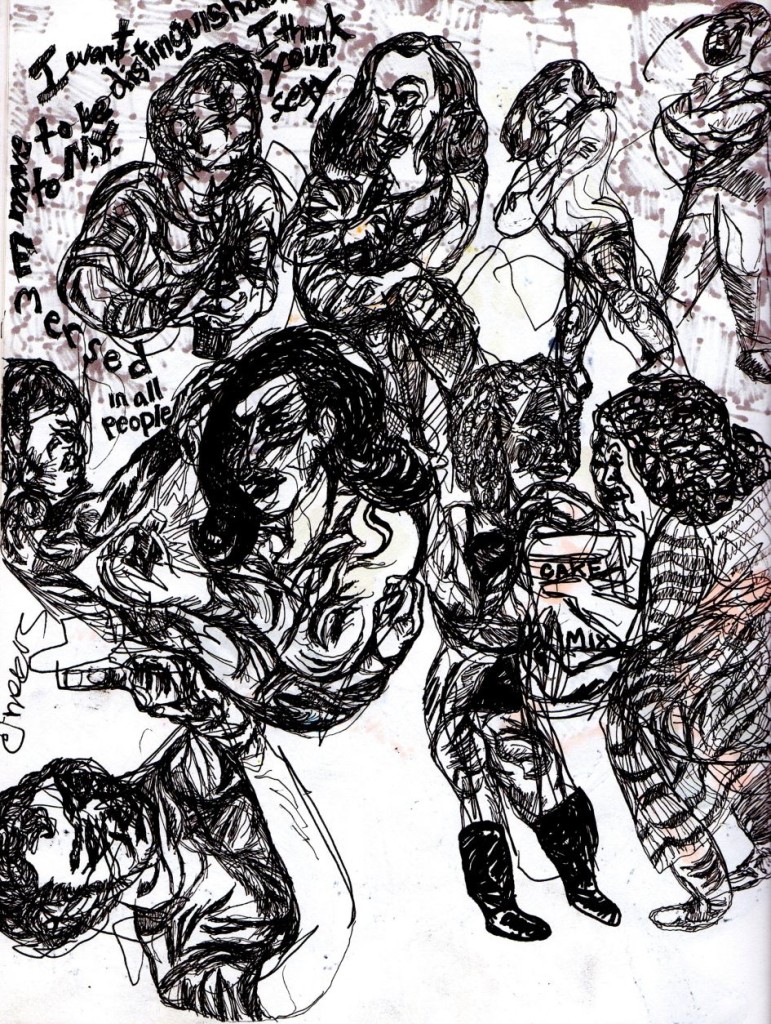 Our understanding of abusive relationships from men in the story strike an unnerving scenario when the tables were turned and the women prey on the Male with flash lights. It brought out the fear of a defensive animal being cornered. The pressure created by the hand held flashlights heated up the attack and revealed the sniper mentality. When aggressive personae was fed by snippets of reportage there was a misconception about the assault, consequences, and degree of policing future attacks. Action news reporters played by Sol Madariage and Christopher David Roche highlighted the infectious disease as an epidemic. Elephant Room Productions takes socially insecure subjects that currently haunt workplaces, personal space, and our mental health. Rape was the elephant in the room as we took in the newspaper covered walls. The call for justice rather than media coverage was integral to Salamander’s movement, supporting Salamanders, and the education about WOAR- Women Organization Against Rape.