” ‘Merry’ and ‘tragical’? ‘Tedious’ and ‘brief’? That is hot ice and wondrous strange snow. How shall we find the concord of this discord?”   —Theseus in William Shakespeare’s A Midsummer Night’s Dream 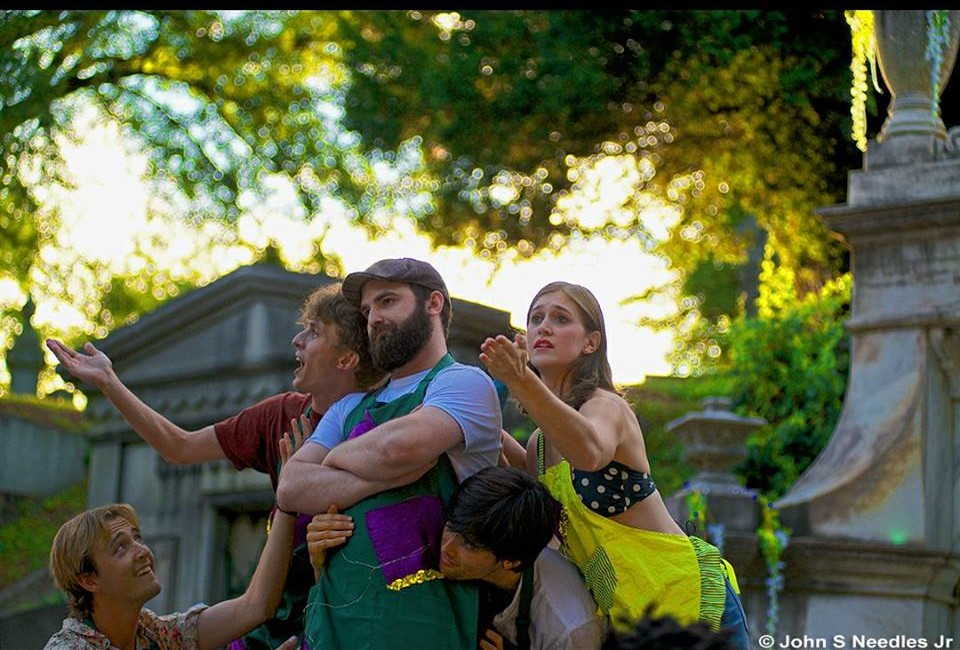 Summer in steamy Athens. Youths in the searing throws of forbidden love, mischievous spirits, and ‘rude mechanicals’ (tradesmen) newly become actors are entangled in a surreal foray through a forest fraught with eerie echoes, where time wavers betwixt and between wakefulness and sleep and mistaken identities forge mishap. The basic who, what, where and why of their world molded upon blunder and whim. Double dealing, doubling of characters, double entendre and double dating, of a sort, are doubly fun to watch as The Mechanical Theater brings to vibrant life  A MIDSUMMER NIGHT’S DREAM by William Shakespeare, directed by Loretta Vasile!

The main stage area delicately decorated with wispy florals and luminous candles, centers around the customized Venetian Gothic styled Benson Mausoleum at the Laurel Hill Cemetery, augmenting the aura of Athenian marble with ambient grace and charm. The tomb, banked into a hill shaded by trees, provides many layers of playing space and is ingeniously utilized by the troupe to adorn with hilariously animated physicality, assorted sound (Dávid Gurmai, sound engineer) and live mellifluous music. This splaying of action lends both authenticity and visual volume to the interplay of characters and myriad hijinks taking place. Costumes reflect a fascinating medley of `70’s chic, fable, Goth and light. In fact, the fairies, Peaseblossom, Cobweb, Moth and Mustardseed are physically represented solely by lights, in varying colors, cleverly hung by string over top the Benson tomb. Just add voice, animation and voilà: airy spirits. Fathom that!

This cast simply killed it on stage. Tamara Eldridge, who portrays the Amazon Queen Hippolyta and an elegantly urgent Titania, dishes out her Elizabethan from a well of comprehension with force and style. Her counterpart, Anthony Crosby plays Theseus, Duke of Athens, and a devilishly ominous Oberon, master to the plucky trickster Puck, given much intrepidity and impishness by William McHattie. Connor Behm gives a stern Egeus, forbidding father to Hermia, who is adroitly embodied with great expression by Emily Dale White, and Julia Kershetsky gives Helena some sweet fire indeed. Collin Hadsell and Chris Naughton granted palpable enmity, comical fighting horseplay, and vitality to their respective rival characters, Lysander and Demetrius, who are forestalled with desire. The comic band of tradesmen turned actors, or patches by Puck, are depicted delightfully by White as Snout, Kershetsky as Starveling, Behm as Quince, Hadell as Flute, Naughton as Snug and Sean Vermeire—the uncommon height of the braying ass Bottom—making many in the audience laugh out loud, particularly the very young with their superb shtick. The attention to detail along with interspersion of modernities (Hermia to Lysander, “Text me…” a hint of Princess Bride and more), imbue depth and add a nice touch to the overall experience.

Shakespearian scripts lend well to embellishment and extra visionary impulses. With their trademark originality, The Mechanical Theater knows how to shake things up to create stirring performances. A dynamic combination and an absolutely dreamy evening of enjoyable entertainment!