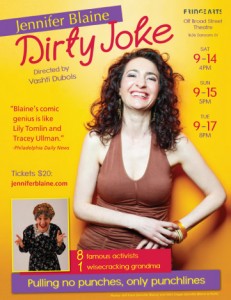 Actor/comedian Jennifer Blaine was a feature of the Philly Fringe for its first decade. Returning for the first time since 2007, she brings back one of her most popular characters for the delightfully humorous DIRTY JOKE: the foul-mouthed, joke-telling Jewish grandmother Ruth. Faced with relocation from her urban home to a retirement facility, Ruth seeks advice from a conference of superwoman (nine female and one male activists; “I’m using woman to mean person, the women will understand”).

Blaine inhabits each “superwoman” adeptly, changing posture, accent, and expression, with only slight costume cues. Between meeting each famous woman (e.g., Madeleine Albright, Cindy Sheehan, Arianna Huffington), Ruth runs through a series of risque jokes (“Incontinence hotline, can you hold?”) and spoofs of Broadway numbers (“Scalia is a schmuck”). The jokes continue with each guest character (blind Irish activist Caroline Casey: “what do you call the blind Irish fellow who bounces off walls? Rick O’Shea.”), but several visits take  serious turns. Despite these emotional moments, the work fails to build up dramatic tension: unlike Anna Deveare Smith’s Twilight: Los Angeles, 1992 (L.A. riots) and Let Me Down Easy (grace and mortality), Blaine’s similar collection of characterizations is only loosely themed, brought together almost solely by Ruth’s monologues. Still, although these jokes and songs are geared to the aging, female, Jewish, musical-loving audience, even as a youngish male gentile who dislikes Broadway songs this reviewer found much to amuse and contemplate. [The Off Broad Street Theater] September 14-17, 2013, fringearts.ticketleap.com/dirty-joke.