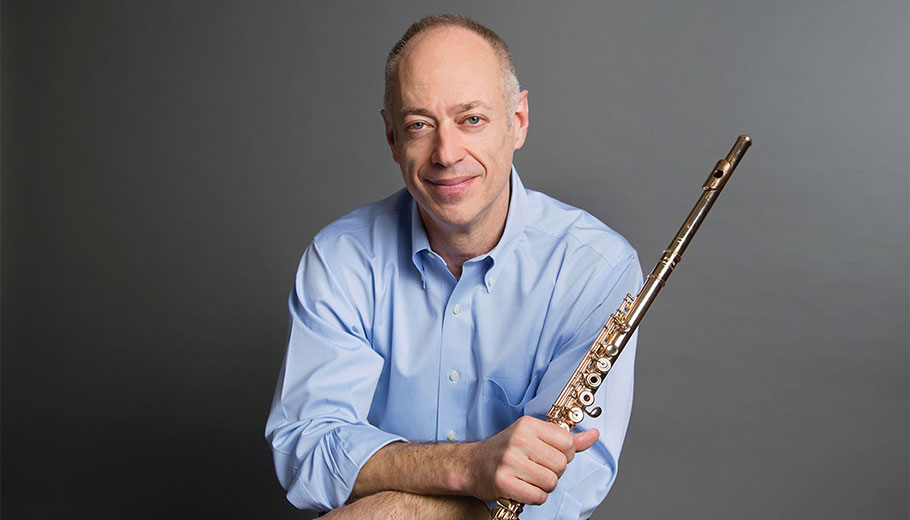 In Friday afternoon’s performance, there were still some slight hesitations in the beginning of the Overture to Rosamunde, especially in the first wood wind solos. Richard Woodhams’ oboe playing sounded brighter and a tad louder than usual, but he led the dancing themes of the Schubert with lively authority. Marc Rovetti, concertmaster for this program, sounded beautiful in his solos.

The Schubert was followed by a new work composed by a man who is by no means young. Samuel Jones, born in 1935, began his studies in his native Mississippi but later studied under Howard Hanson at the Eastman School of Music.  He composed his Flute Concerto for principal flute Jeffrey Khaner, and wrote some extremely fast passages, solos in both the extreme top and lower registers of the flute. It was a thrill to hear how easily and smoothly Khaner could reach the heights and how well he could sustain a full sound in the lower register of the flute.

Maestro Heras-Casado conducted the piece with both verve and control, making the right signals to keep the string sections at their softest so the flute could be heard above them.  Samuel Jones’ concerto was both melodic and modern, starting with complex and dense harmonies in the Lament, giving the soloist both lush Poulenc-sounding minor scale passages and duets and trios with the orchestral flutes. The second movement, entitled Interlude, had even softer orchestral writing which provided a platform for all three flutes, with delicate piccolo played softly by new member Erica Peel, as well as the pianissimo timpani rolls from Angela Zator Nelson. The final movement, the Dream Montage, was full of American marching tunes, a glorious romp which also featured a real church bell, piccolo as fifes and a final cadenza with triple tonguing by Jeffrey Khaner. The 82-year-old composer leapt nimbly onto the stage to take his bows, visibly pleased with the premiere performance.

The final piece on the program, the Brahms Symphony No. 2 in D major, Opus 73 is a veteran gem. Maestro Heras-Condado gave the orchestra space to exploit the incredible melodic lines, with Richard Woodhams bringing the oboe melody to the forefront of the delicious Brahmsian woodwind writing. David Cramer, also an old hand in the orchestra, showed his talents with crystalline flute entrances. Marc Gigliotti, fully recovered from hand surgery, sounded as smooth on the bassoon lines as ever, and the fantastic French horn parts were so beautifully wrought by Jennifer Montone – it could not have been better.  The ensemble of the horn section when they played the thick Brahms chords was just right – no wavering and all silken, perfectly tuned. In the fourth movement, the trombones had a short part, but it was so smooth and rounded, it was stunning.

With brand new music combined with old repertory, brand new artists like Erica Peel, and older artists like David Cramer, Richard Woodhams, and Marc Gigliotti, the Philadelphia Orchestra has made a great start for the new year.