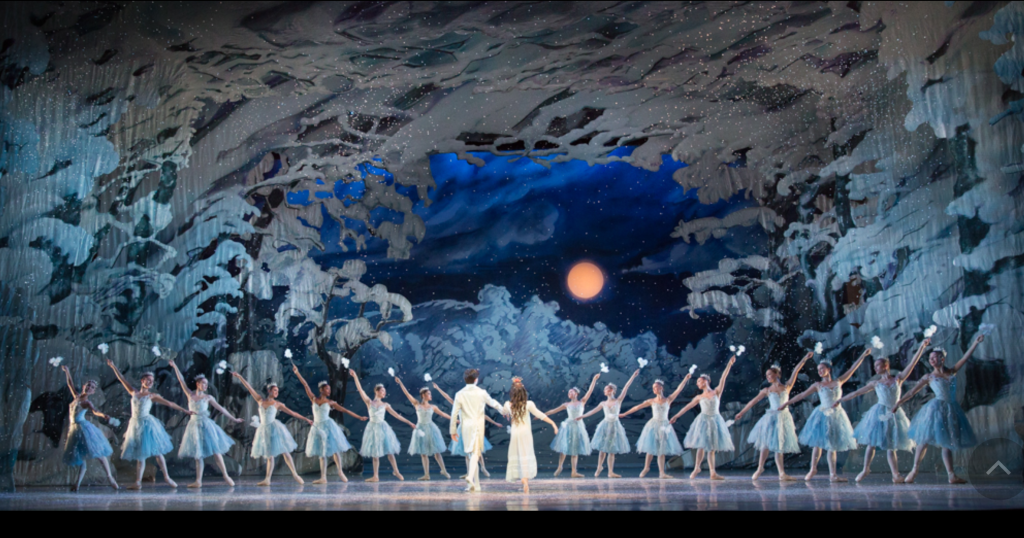 Pennsylvania Ballet presents its annual holiday favorite work, George Balanchine’s THE NUTCRACKER, at the Academy of Music until December 31. Created by the great choreographer George Balanchine in 1954, this version of THE NUTCRACKER was danced for many years by his company, The New York City Ballet. After his death, it continues to be a holiday favorite in New York City and Philadelphia.

The plot centers about the Stahlbaum household which is filled with revelers and children on Christmas Eve. The Stahlbaum children, Fritz and Marie, are first seen early on, disagreeably fighting. Only when the mysterious, transgressive godfather, Herr Drosselmeier, appears with fabulous automatons to beguile the children, do we sense something esoteric in the air. Marie is given a nutcracker doll which the asocial Fritz promptly breaks.

This nutcracker becomes the beloved doll which provokes the dream Marie has of the Mouse King and his minions, a land of sweets, handsome men and beautiful fairies. This production lightens the story, avoiding the darker side, playing down the repressive Stahlbaums (German for “steel tree”), Marie’s crisis of wishing to escape, and her yearning for romance and adventure.

In this production of THE NUTCRACKER, much of the story involves children in the principal and supporting roles. So we have The Little Prince, who is played at the performance seen by Graham Wissinger.

Young Wissinger acquitted himself in the role admirably. His mime performance elicited great acclaim from the audience. The work concludes with a grand duet by The Sugarplum Fairy, here danced by the astonishing Oksana Maslova, and Her Cavalier, Sterling Baca, looking every inch her noble swain. Their exceptional technique was a joy to behold. The tall and handsome Baca supported Maslova in her most elegant and breathtaking movements. At one point, Baca pulled Maslova for a yard across the stage while she was en point, as if a zephyr blew her. Impossible? No. The audience saw it with our own eyes.

The creative team responsible for Pennsylvania Ballet’s  fairyland spectacle is Cristopher J. Frey, lighting, Julianna Lynn, costumes, and Peter Horne, scenic design. Horne was an assistant to Maurice Sendak who created a famous production harkening back to the original E.T.A. Hoffmann tale. This might be one reason why we have a seven-headed Mouse King, since it was so in the original story.

Pennsylvania Ballet invites you to  a spectacle of dancers, dancing children, dancing toys, snowflakes, candy canes, and beverages, magic, and color. Will you accept their invitation and visit?