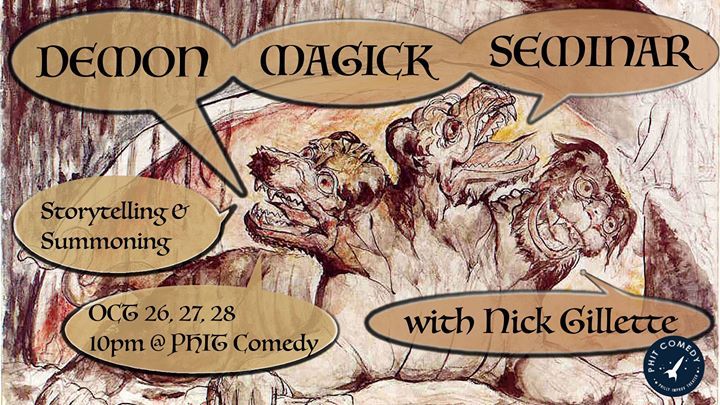 Storyteller and acrobat Nick Gillette is best known for his work with Almanac Dance Circus Theater, which he cofounded in 2013. But he also dabbles in comedy and demon summoning.

His Demon Magick Seminar returns from a successful premiere in the 2017 Solowfest, just in time for Halloween. The solo show combines storytelling, theater and acrobatic dance to expound upon a cluster of themes, including the power of storytelling over reality, and the tragic state of fraudulence and delusion in those who claim authority over truth. The show takes place at PHIT Comedy’s Mainstage at the Adrienne Theater, 2030 Sansom St., at 10pm on October 26, 27, and 28 (Gillette has taught at PHIT since 2007).

“I have a skeptical stance towards anything supernatural, but each primary source magical text I’ve read insists that the most important ingredient for any summoning is belief,” says creator and performer Nick Gillette. “As embarrassing as it might be, I’ve decided to give it an earnest attempt.”

Demon Magick Seminar weaves a braid of gripping tales from the edge of reason. Drawing on personal experience with ghost hunting, UFO cults, and conspiracy theorists, Gillette identifies the enduring beliefs that reason can’t seem to dispel. Reaching deep into the history of Magic, he uncovers clues as to why our culture craves stories of the uncanny, and why there will always be someone eager to tell them. The show culminates in an experiment with no control: what happens when you follow the exact instructions to summon a demon as written in the 17th century grimoire Clavicula Solomonis Regis?