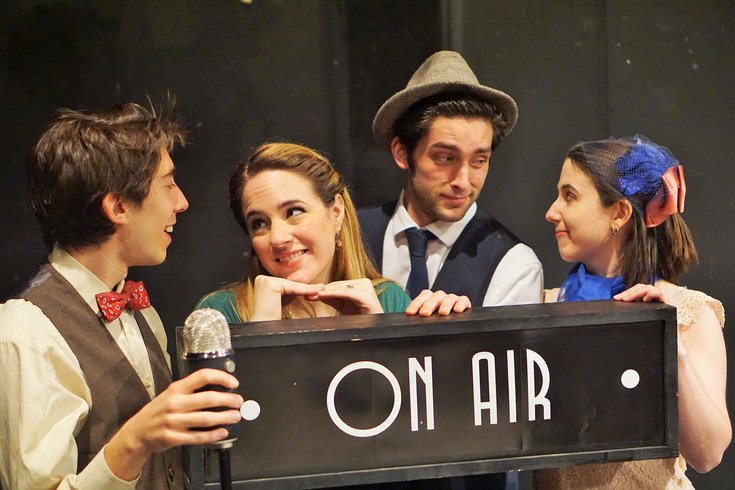 Old style ‘On’ and ‘Applause’ signs light up. The show starts. Liberty City Radio Theatre revisits the world of scripted commercial radio programming: A court case recalls zany Gracie Allen, and a crazy cat story features a very laconiccat. Some show pieces are adapted, but mostly it’s new stuff mixing it up with references to old TV shows, tunes from records, and modern retro commercials. Some written sketches don’t appear to have been rehearsed. Humorously, several ads for a real sponsor, Ovations Salon, are worked in. The ‘cultural’ part of the program features two condensed works: Moby Dick and The Perfect Storm. And when Liberty City says condensed, they mean condensed. A Variety Show with its own agendas, Liberty City goes lite on current politics. However, several references are maneuvered in. For instance, Police Officer Martinez affects an Irish accent because it’s safer than sounding Mexican.

Bill Arrowood conceived and produced this live, although not actually broadcast, radio show. He directs from behind his table of old-time sound FX tricks. A slide whistle, post horn, balloon, toaster, bicycle bell, gravel, and who knows what-all provide atmosphere and audio verisimilitude. Unlike Foley artists, who work post-production on films, old timey radio guys worked live like this (although in later years some sounds were pre-recorded). Of the seven cast members who play multiple roles, five have been appearing in other Fringe shows too. This high-spirited cast gets everyone on board. Riffs on ancient jokes squeak by, in fact, the more egregiously prosaic, the more applause. If the puns were any cornier the writer and cast would be serving time. The evening is also peppered with bright, and dare I say it, sweet, little musical interludes. All is prologue, however, to the introduction of the winding episode of an ultra popular old-time radio genre: The hardboiled detective story – with its dramatic piano accompaniment. The story is called (cue the music –dum dum dum dum): Danger is My Middle Name. Detective Sam D. Marlowe talks Noir: “She wore a dress that clung to her like a stray sock in the dryer.” At the close of this warm and funny evening, the audience joins the cast in singing a popular refrain that everyone knows.