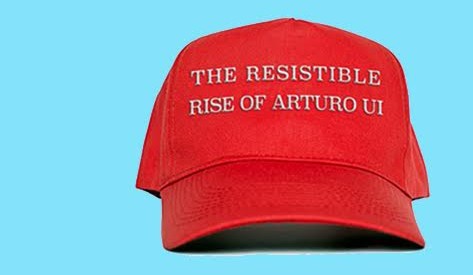 Bertolt Brecht wrote THE RESISTIBLE RISE OF ARTURO UI to alert Americans to what Hitler really was. Hitler is cast in the play as Arturo Ui, a Chicago hood who rises through deceit and power grabs. Ui is behind rampant fraud and slippery fake testimonies. He’s into mob-style intimidation and takeovers under the name of “protection” as he schemes against any possible competition. The play, which lampoons Hitler as an egomaniacal rabble-rousing demagogue, has seen productions in recent years in several countries. But this production is different because it’s a parody of a parody. The program with the red hat picture and the introduction to the show draw attention to the inevitable Donald Trump tie-in. These giveaways actually steal some of the production’s own thunder. Leaving the definitive Trump discovery to the audience might be more interesting, as the Arturo Ui play reverberates ever more meaningfully today.

Three guys, Kevin Fennell, Joshua Kirwin, and Nathan Dawley, started this new theater/media company. DBaD Productions lays into Trump. Kevin Fennell directs a cast of 13, with several in multiple roles. The crazy thing is, they’re just starting out and they’re all actually quite good actors. John Prescod has the gestures and voice down as he translates Arturo Ui’s speeches into remarkably apt Trump-talk. He says, “I’ve always been a confidence man. I mean, a man of confidence…” as he deals with gangsters and businessmen.

The show is staged in the roofed but open market area right down the middle of Head House Square. Loud buses roar and large trucks negotiate the square along with car and pedestrian traffic as the actors bravely speak their lines. Passengers on the open upper decks of tour buses lean out and watch with interest as they ride by. This young company uses projections as did Brecht in his works. Brief piano notes are played for interludes and emphasis. Many little hidden jokes are buried in the text, for example, someone’s license plate is the dystopian, THX 1138. I do have a bone to pick, though: OK, these guys are new at this game. But when a Fringe show billed as lasting an hour and forty minutes stretches into two hours and fifteen minutes (including intermission), it’s a problem. This occurred despite quick and well orchestrated scene shifts. Accurate timing and notice of a show’s length are important, especially in the Fringe. Audience members may easily have tickets for another show afterward. Several people left after the intermission when it was obvious that they couldn’t make it to their next engagement. Still, the show was well done and well received. The Fringe is an excellent place for companies to mount political protest plays, especially these days.