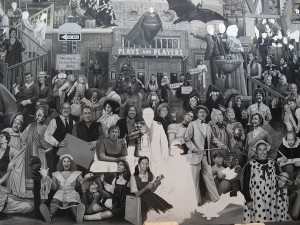 You know those commercials at the movies that play for fifteen minutes before the trailers? You don’t want them, you don’t care about them, but you accept them as part of the transaction. You hope the enjoyment you get out of the film you are about to see will cancel out the advertisements. Now imagine there’s just one commercial before the movie—only the commercial is an hour long. And instead of being on film, the commercial is acted out in front of you. And rather than Coca-Cola or AT&T, the product being peddled is the very theater you are sitting in: THIS IS NOT A THEATER is the most disgraceful, insulting, insipid, wasteful performance of anything this reviewer has ever witnessed. It is marketed as a world premiere, and as “two shows for the price of one!”—its only four performances being in conjunction with other pieces (The Living Newspaper and All the Sex I’ve Ever Had). But to call THIS IS NOT A THEATER a “show” is like calling Triumph of the Will a political drama.

A girl’s voice is heard singing a simple tune over the P.A. Some old folks—who have been sitting on the stage since before the house was open—begin speaking, their voices overlapping and out of context. Suddenly, this all stops and some actors dressed as superheroes and clowns (I don’t see the connection) emerge onstage and begin handing some pamphlets to the crowd. They look like programs, but they’re actually copies of a forty-page comic book called This is Not a Theater. Superman—a bald man probably in his fifties—informs us that we have ten minutes to read this comic book, after which period the show will continue. We then read, in silence, under the house lights, for exactly ten-minutes. (Rereading this description it sounds like I’m describing a dream I had after eating too much past-date ground beef. I swear I’m not lying. This happened.)

The comic book follows author/artist Navin Rawanchaikul on his first visit to Philadelphia. Our Hero was doing the Rocky run up the art museum steps when he got kicked in the face and was rescued by a band of (wait for it!) clowns, who took the incapacitated Thai-Indian to (da-da-da-DA) Plays & Players. (And look! There’s P&P artistic director Dan Student in the comic! There’s the upstairs bar, Quig’s Pub, in the comic! You guys! In the comic!)  Our Hero resolves to create a piece of theater (or a comic book or a mural or something) to pay tribute to these fine people.

Now you’re asking: What could be worse than being forced to read propaganda in silence when you were promised (and, if you’re not a reviewer, when you paid for) a performance? How about this: Imagine you’re forced to read propaganda for ten silent minutes, and then afterwards a group of sixty-somethings filter onstage and each of them recite stories about their time at Plays & Players. Is that worse? What if several of them can’t even remember their own lives and have to read off index cards? What if this all happens in front of a gigantic mural depicting the P&P façade surrounded by the art museum, Pat’s Steaks and the Love Park sign, as if to suggest that P&P ranks among the great Philly landmarks? What if this is the entire rest of the show?

I cannot critically evaluate THIS IS NOT A THEATER because it is not theater. It isn’t fiction, it isn’t art, it isn’t even really a performance. It’s the live equivalent of a corporate recruiting video. By selling it as theater, the producers are being irresponsible and false. If the performance had been a free affair, and was specifically intended to be seen by a board of trustees or some potential donors, that would be fine—perhaps even ideal. But there is no justification for such a public display of self-righteousness as THIS IS NOT A THEATER. (My advice: If you want to see The Living Newspaper and All the Sex I’ve Ever Had, show up at around 8 p.m. and act like you’ve been there the whole time.) [Plays and Players Theater]. September 11-14, 2013. fringearts.com/festival/2013/this-is-not-a-theater

3 Replies to “[28.2] THIS IS NOT A THEATER (Navin Rawanchaikul, Navin Production): Fringe review”