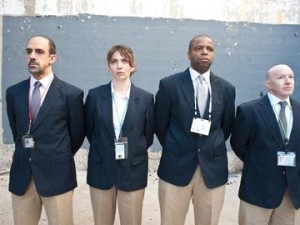 “You’re not here.”
“Yes I am.”
“But you’re not supposed to be here.”
—ENLIGHTENMENT ON E FLOOR NORTH

Someone once said that war is months of utter boredom interspersed with moments of sheer terror. Working as a security guard at a museum is like that, only without the terror. (Me: Franklin Institute, summer 1995.) “Let’s get to work,” says one of the four security guards in Strange Attractor’s funny and well-conceived consideration of museum work. Cue several minutes of silent, posed stance.

The mindless boredom of many jobs is a subject under-treated by theater. The personas we inhabit and encounter at the workplace—the tightly wound boss (Aram Alan Aghazarian), the too-intelligent-for-this new guy (Roblin Gray Davis), the emotional colleague who takes it all a bit too seriously (Rebecca Noon), the laid-back guy who might be on the edge of a meltdown (Kamili Feelings)—these are familiar characters, fleshed out here in subtle (a surreptitious candy) or surreal (a necktie snake fight) physical comedy. With a deft comic touch, director/conceiver Jed Hancock-Brainerd captures the inane conversations, overblown trivialities, and limited experiences of people we encounter every day. ENLIGHTENMENT ON E FLOOR NORTH eschews traditional plot, but the stories it tells resonate.