Phindie’s former theater editor and sometimes contributor, Julius Ferraro is a fierce presence in Philadelphia performing arts, onstage and off. He’s creator and editor of Curate This, newly minted editor-in-chief of thINKingDANCE, and has written on arts for Philly.com, The Smart Set, and the FringeArts blog.

His skills with language are also displayed in his creative performance work: Micromania, The Death and Painful Dismemberment of Paul W. Auster, and The Mysteries of Jean the Birdcatcher with {HTP}, and On the Road for 17,527 Miles with 14th Street. He talked to Phindie about his latest play, PARROT TALK. 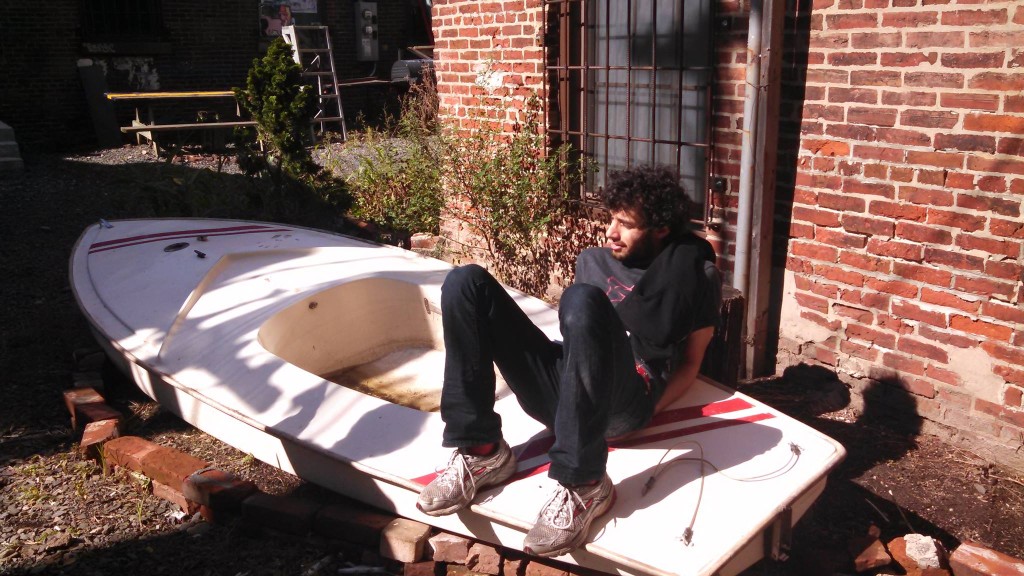 Phindie: Where does PARROT TALK come from?

Julius Ferraro: The title references Alex the Parrot (have you seen those videos?). He’s a sort of star of it, though his story isn’t in it anymore.

Phindie: What attracted you to him?

Julius Ferraro: He got famous because the expanse of his vocabulary, and his ability to ask questions about his environment and drive his own learning. I’m very interested in breaking down language and its component parts.

A big question in writing this play has been: how far can you drive language away from phrase, sentence, paragraph structure? Can it escape those structures at all? And what happens to meaning when you do that? Turns out, I think we’ll find, meaning cannot be avoided. The brain is this incredible thing which is designed to produce meaning out of chaos. This is primarily good, but also bad, and can distort reality and create shadows of narrative where there is none.

Julius Ferraro: There are a lot of stories that have come together to produce this play, and a lot of them don’t survive in it . . .there’s an inside joke with a friend who used to work at Mural Arts, about a mind snake. Terry Thompson and the Zanesville Zoo escape is there if you look hard.

The other major source that’s in it, aside from Alex, is Peter Price’s Resonance. Peter Price is co-curator of thefidget space here in Philly. This is a really incredible book about the philosophy of sound. Have you read it?

Julius Ferraro: It’s gorgeously written and almost impossible to understand at points. It can be read both as theory and as deeply evocative poetry. I hit it from three directions: the actual meaning it’s trying to convey, the nature of its discourse—its linguistic style, its linguistic strategy—and then by actually quoting it, or fragments of it. [continues below…]

Phindie: You’ve billed this as a “language play”. What does that mean?

Julius Ferraro: This is a great question. It’s a disingenuous term, but that’s marketing for you. Mac Wellman, who’s a great source of inspiration for me both stylistically and ideologically, is often called a language playwright, though I don’t know if he would use that term. Throughout his career he has played with language pretty radically. A lot of his work is extremely dense and difficult to understand on the page, but it gives a lot of opportunities to performers to bring out meaning in their performance, and is endlessly rich.

I would say that the term refers to plays which not only comment on the meaning of language, but which pataphysically inhabit the language and the commentary on it. It’s not enough to say “language is weird”—you have to lead the artists and the audiences down weird alleyways through experimental use of language.

Phindie: How does that differ from other theatrical experimentation we see in Philadelphia?

Julius Ferraro: Philly writers don’t often experiment with language. I’m going to steal the words of Hallie Martenson, one of my actors; she commented that Pig Iron and Headlong and other theatermakers have really led the charge in physical experimentation. But a lot of dialogue in our theater is very similar, very TV, very naturalistic. So what we’re doing is extremely unusual in Philly.

Phindie: Yeah, I recently read a review of a new play which praised it by saying it would be a good TV pilot. That seemed like a brutal condemnation to me.

Julius Ferraro: Umm, my play would make a terrific TV pilot. If you’re looking for something to pitch send me a text.

Phindie: Seriously, what are your hopes for this play?

Julius Ferraro: My hopes for this are that AS MANY PEOPLE SEE IT AS POSSIBLE. Though I am money hungry (why else get into theater?), also, like, if you can’t afford the $15 entrance fee (I expect you can), or if you have a class of teenagers who want to try something new, or something, send me an email. We’ll work it out.

I want people to see it because I think it’s really good, and I think you’re not really expecting it to be what it is. I think it’s going to read really easily to an audience, gonna be a little surreal and psychedelic, but you’re going to be surprised by how accessible it is, despite all this talk about weird language. The fact is, we’re surrounded by weird language which is also really evocative but usually used for evil purposes (advertising, politics, shitty entertainment, etc.).
I’m already working on responses to PARROT TALK, future plays which either reject parts of the play or dig deeper into what I think the key experiments are. So I also selfishly want people to see PARROT TALK so that they are hungry for the next Julius Ferraro project.

Phindie: What makes a successful play? Just one that has a large audience?

Julius Ferraro: A successful play challenges its audience. Far too often writers put everything out there, over-explain and over-excuse themselves, expect very little from their audiences. You can see this in the super-predictable and excruciating narrative arcs Hollywood spits out again and again, the too predictable love story, the insultingly two-dimensional bad guys, etc.

Phindie: How does writing and editing pieces on performance influence your own work?

Julius Ferraro: That’s a great question and I’m not entirely sure.

Phindie: Oh. Tell me a little about your collaborators. How are they shaping this work?

Julius Ferraro: When I was trying to get PARROT TALK off the ground, people kept telling me to direct it myself. But I don’t have those skills. I really really value the transformation which happens when you hand a play off to a director. I am still sold on the idea that a director can take a written text and help it become what it should be.

So Jack Tamburri is the director, and he has been involved for over a year now, and has helped to guide me on a couple of revisions of the script. He’s got a really diverse resume as a director, and he’s helped me to figure out which rules I want to break, and which ones I need to reinforce.

In the last revision or so, too, Liz Atkinson, the sound designer, has been an important voice. Where Jack is able to translate this piece from 2D to 3D, she has a perspective on the ideas in it—the Cagean ideas of noise, the concepts of resonance and quantum physics that the characters reference—and has really helped us to understand how all of these concepts are reinforcing and affecting the narrative.

Of course theater is so collaborative. You don’t get a production without other people’s bodies, other people’s voices, and other people’s ideas. PARROT TALK is particularly open for interpretation when it comes to character and style, so I think when you see the show you’ll get a really interesting perspective of my writing through the lens of the various performers: Dan Higbee, Hallie Martenson, Christina May, Dani Solomon, and Alex Tatarsky.

Phindie: Have you seen this? It’s been viewed eight million times.

Julius Ferraro: Well I have now. God what a terrible song. Parrots are actually really smart. They’re candidates for the smartest animals after humans, alongside dolphins, squid, and primates.