Internationally celebrated harpsichordist Mahan Esfahani appeared at the McCarter’s intimate Berlind Theatre on Sunday afternoon, March 19. His recent recording of Bach’s Goldberg Variations has garnered extraordinary praise. The Guardian writes of Mr. Esfahani’s “piercing insights” into the music, while the august publication Gramophone calls this recording “remarkable,” “provocative,” and “bravura.” Mr. Esfahani did not disappoint his Princeton audience on any count this sunny last day of winter.

Mr. Esfahani studied musicology and history at Stanford University, furthering his harpsichord studies in Prague, where he now lives. Born in Tehran in 1984, he emigrated to the United States four years later. He made his London recital debut in 2009. He has already established himself as a sought-after soloist and collaborator. He has a five-season engagement at London’s Wigmore Hall where he will explore the harpsichord works of Bach.

So what does this genius look like? Part Oxford don in appearance and manner, he surprised many by speaking in what could be called a Canadian accent. He started by talking to the audience by microphone, something which he would use throughout the program as he gave insights leavened by sly humor.  He made it clear to the assembly that his would not be the standard recital. Glancing at the program, that statement was apparent: pieces by Thomas Tomkins and Giles Farnaby, both active about 1600, followed by Set of Four (1960) by Henry Cowell, Three Aquarelles, Op. 53 (1979) by Viktor Kalabis, and Jardin Secret II (1986) by Kaija Saariaho. Mr. Esfahani instructed his audience to approach this as a journey of discovery. Some pieces may not be to your taste, but others might be we were told. This is what he felt was the importance of an artist presenting what he loves to the public.

What of the playing, you may ask. Mr. Esfahani left nothing to be desired, and so very much to be admired. Thanks to the informative program notes by David Wright, we discovered that the harpsichord cannot be forced to be louder or softer, as a piano can. Rather, effects are produced by skills at tempo, articulation, and massing notes, if players had what was called the touch. Our soloist definitely possessed this “touch” to an astonishing degree. Effortless cascading curtains of sound surrounded our ears. The harpsichord, obtained from a local purveyor, was obviously chosen with great care for what it could do. Unfortunately, no one ever wrote about the instrument, and the artist never spoke about his choice of that particular instrument. 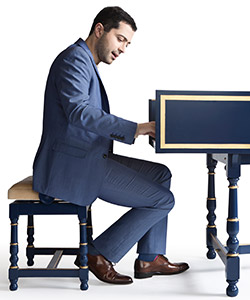 Of course, the pieces were challenging (even provocative) to those who expected an ordinary program. The Cowell, under such expert hands, sounded ravishing, while the Kalabis had many eccentric and notable beauties. The Saariaho we were told was banned when it was first presented at IRCAM in Paris. Naturally, our ears were keened to discover why. The only thing we could discern was that the recording (which involved a stop watch on a cell phone and visual connection to an audio engineer for the recorded sound) sounded like a female orgasm followed by snoring. This last piece struck many as elaborate for the sake of being elaborate which would then make it so very much more important and modern.

After the interval, the program was to conclude with Bach, Steve Reich, and Domenico Scarlatti. Bach’s Toccata in c minor, BMW 911 was dispatched with elan. The Reich never happened since synchronizing recorded sound (with the artist wearing an earbud) went beyond the capabilities of the moment and was dropped. The Scarlatti works offered further proof of the extraordinary sensitivity for which Mr. Esfahani is rightly celebrated. The program ended with an encore of one of the Goldberg Variations, in a sublime, intriguing interpretation.