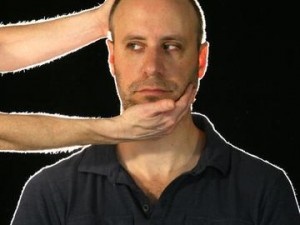 Julie Beauvais is a director of operas. She lives in the mountains of Switzerland. Her partner on THIS IS NOT FOR YOU is Jon Foley Sherman, a professor at Franklin & Marshall College. Years ago, they both studied at world-famous physical theater school L’École Internationale de Théâtre Jacques Lecoq and quickly became fast friends. And then, for some reason, they didn’t speak for more than a year. Now it’s been a decade since they last collaborated.

One thing they have in common is loneliness—loneliness like a weight that pulls, like a wave that washes over you. The kind that lives in the place between your guts and your lungs. She needs her solitude—her goal is to be as hard and alone as a rock. He finds his almost impossible to deal with, and so strives to get ever closer to people. They have rejoined to create a visually and emotionally lyrical dialogue about the presence of others. Make no mistake: this is a debate, not a love fest. There will be no coming together, the show suggests, because two can’t ever come together into one. At the end of the show, though, what the audience is left with is not a sense of solitude, but a look at the shared experience of two gifted artists who seek communion. [Pig Iron School Studio 1 at Crane Old School] September 6-7, 2013. fringearts.ticketleap.com/this-is-not-for-you.

One Reply to “[12] THIS IS NOT FOR YOU (elbow room performance): Fringe review”