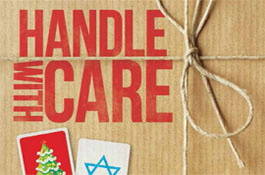 HANDLE WITH CARE takes place in a small motel room in a nondescript town in Virginia. The play opens with a nervous Terrance (Josh Carpenter) pacing the room while an irate Ayelet (Sarah Raimondi) scolds him in a foreign tongue. She has good reason to do so as Terrance, a local delivery truck driver, misplaced the coffin of her Israeli grandmother, Edna (Barbara Hannevig). Unfortunately, this all happens in the middle of a snowstorm on Christmas Eve. In an act of desperation, Terrance solicits the help of his elementary school friend, Josh (Jesse Bernstein). “Why did you call me here?” Josh, a recent widower, wants to know, thinking Terrance is trying to set him up on a date. “Because you speak Jewish, right?” Terrance innocently replies.

This sets the tone for the rest of the play, which is brilliantly seasoned with humor—the type found when differing cultures collide.  The play seamlessly transitions between the present day and the not-so-distant past when Edna was still alive. And, although Edna and Ayelet speak to each other in English, we know they are really speaking in Hebrew; this is underscored by slightly askew pop culture references, like “Hit the road Jeff.” The acting is tight with an endearing cast who will certainly make you laugh.

One Reply to “HANDLE WITH CARE (Montgomery Theater): 60-second review”