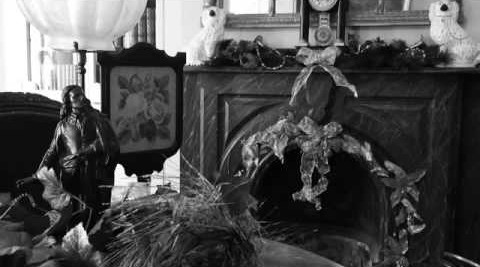 The spirits of Edgar Allen Poe’s tales come alive in the historical Ebenezer Maxwell Mansion. Directed by Josh Hitchens, Edward G. Pettit’s MYSTERY IN THE HOUSE OF USHER: A POE TALE invites guests to solve the death of Poe’s recently deceased love, Lenore. Patrons travel through rooms impressively preserved in the Victorian era, listen to the alibis of Poe’s eccentric friends inspired from his poetry and prose, and figure out who killed the poor girl.

The experience of the evening is a mix of playing Clue and going through a haunted house. The characters (Sue Edelman as Madeline Usher, Judy Palkon as Mrs. Price, Aaron Roberge as Montresor, Sam Miller as Edgar Allan Poe, Allison Kessler as Ligeia, Molly Edelman as Roderika Usher and Annabel Lee, and Benjamin Behrend as Prince Prospero) are all crazy enough to commit murder, so sleuths must listen carefully if they want to figure out the identity of the true killer.

Swimming with the dozens of red herrings might trick some into overthinking the solution, so be forewarned you don’t have to be Sherlock Holmes to solve this mystery. There’s a mixture of special effects and theatrics that make the night a chilling pleasure, enough to capture the imagination but not so intense that teenagers with a little Wednesday Adams flair wouldn’t have a good time.

What’s really impressive is the loyal fan base; the Ebenezer Maxwell Mansion has guests returning year after year. If you give this attraction a try you might become one too.